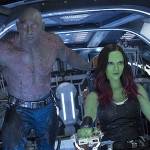 Just last year, James Gunn was fired from Marvel Studios for his past inappropriate tweets, and many have been speculating that Guardians of the Galaxy series will likely to meet a big change considering how much the former director have contributed so far to its astonishing achievements. According to Cinemablend, however, Kevin Feige himself has stated that James Gunn's works are still pretty much intact with MCU, and they're still going use his script for the upcoming sequel for Guardians of the Galaxy series. It's sad to say that James Gunn will not be returning to Marvel Studios at least not until Disney decides to hire him again, but his fans would surely love to hear his works are still influencing the overall production.   #MovieNews