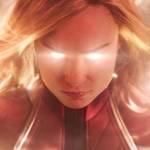 Captain Marvel reactions are in and it's pure '90s fun for Marvel fans Brie Larson in a Nine Inch Nails T-shirt? We are *so* there. www.cnet.com

The long waited Captain Marvel finally had its early screenings for members of press and guests, and their reactions are phenomenally positive! Here are some of their reactions on Twitter!   Brandon Davis @BrandonDavisBD / Special Assignment Producer of Comicbook.com ‏Fans of #CaptainMarvel comics are going to love the movie. Plain and simple.   Eric Eisenberg @eeisenberg / Editor of CinemaBlend Captain Marvel is a blast! Has some cool surprises that I definitely didn't see coming, and the mystery/origin it weaves is engaging and fun. Brie Larson is awesome, and makes a fantastic first step into the MCU #CaptainMarvel   Scott Menzel @TheOtherScottM / Editor-In-Chief of We Live Entertainment Captain Marvel is everything that I hoped it would be. It feels completely unlike any other Marvel film. A unique and fresh take on an origin story that feels new. Brie Larson is fantastic as Carol Danvers. This is one of my favorite Marvel movies of all time. #CaptainMarvel   Perri Nemiroff @PNemiroff / Film Producer The future of the MCU gets even brighter adding #CaptainMarvel to the mix. Really fell for @brielarson’s sass, strength & energy in the role. Same with @LashanaLynch too! Ben Mendelsohn is A+ casting as Talos. And yes, Goose is a scene stealer. 2nd viewing can’t come soon enough.   Ash Crossan @AshCrossan / Producer of Entertainment Tonight #CaptainMarvel is (takes deep 90s breath) TOTALLY AWESOME. Never related to a Marvel character quite like Carol. She’s the stubborn witty 90s kid I like to think I am.   Erik Davis @ErikDavis / Managing Editor of Fandango #CaptainMarvel has a great ‘90s sci-fi vibe w/ a tone unlike any other Marvel movie, really. It’s retro & trippy, mysterious & dorky. It’s funny in surprising places & badass in all the right places. It remains entertaining because it’s always changing. It’s got the right stuff   Drew Taylor @DrewTailored / Editor of Moviefone Really loved #CaptainMarvel. It’s a little wobbly at times but only because it’s so ambitious. It’s beautifully constructed, hilarious and offers tons of surprises. @brielarson obviously rules but Ben Mendelsohn is the surprise MVP.   Anna Klassen @AnnaJKlassen / Writer #CaptainMarvel⁠ ⁠ is very fun. And I am thrilled to announce Brie Larson wears my EXACT SAME NINE INCH NAILS tee for more than half the film. Seriously. I’ve never seen anyone else with this shirt.   Lots of fun Easter eggs in #CaptainMarvel that link it to the history and other films in the MCU. Watch closely.   #CaptainMarvel opens with a very touching Stan Lee tribute that Marvel fans will love.   On a side note, Sonaiya Kelly, an entertainment reporter of Los Angeles Times, has added that there will be TWO post credits scenes. 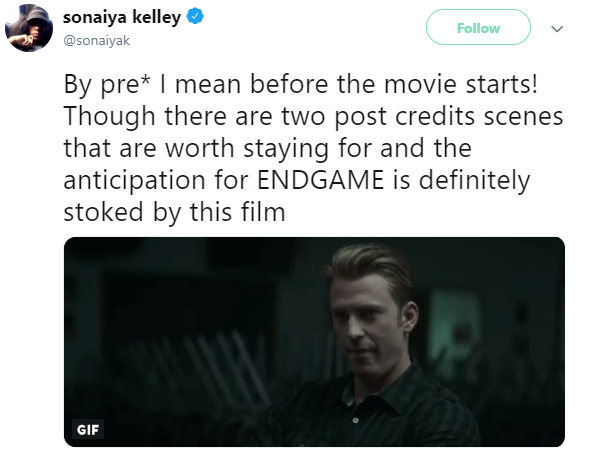