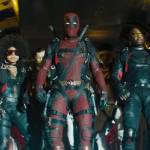 Deadpool creator says X-Force film is 'victim' of the Disney-Fox merge 'Pour one out for ol’ X-Force' www.independent.co.uk It seems the merger between Disney and Fox is negatively affecting well established movie series as Fox decides to hold off two of their film franchises for the moment.   Fans have long yearned for the movie, 'X-Force' ever since the first Deadpool movie came out, but the creator of Deadpool, Rob Liefeld has stated that it isn't likely to happen as the franchise has fallen victim to the merger. It's yet known what Kevin Feige plans to do with characters from X-Men; however, this truly is devastating news for fans.   The Alien series seems to have more hopes of having a sequel as Fox decides to expand the universe through various media, celebrating the franchise's 40th anniversary this year. However, Fox has clarified that they're not working on a project for the next movie which tells us that there are more years to wait before we see another Alien movie.   #MovieNews