Return to one of my favorite games

Earlier today I hopped on to a game I had not played in a long while, and that games name is GW2 (Guild Wars 2) GW2 is an MMORPG which has a free player base of which can experience most of the core game. The restrictions between them and a player who owns the core game (which to my knowledge you can no longer just buy the base game, you would need to buy an expansion) is limited character slots, restrictions on the trading post (the games market), restrictions to chat... (who needs this when you have discord), inability to send items in mail, and area restrictions to access different areas (which can all be obtained by lvling to certain levels). As a player who owns the expansions Ill end my talk of the free to play aspects there since I know more of what can be done while paying for the game itself. The game has 9 classes and 5 different races to choose from. Each race has a race specific story to play through, and in addition there are a few different storylines in those stories that can be influenced based on your prologue you choose to follow. An interesting feature in this game is based on the hit boxes and your dodging capabilities. The range of your attacks are dependent on the weapon you use and each weapon that a class can use has a different set of weapons skills that are associated with it. The dodging ability in the game allows for the negation of powerful attacks of the player can time it right. There are many game modes available for the player to adventure out and experience. This is to include PvE, PvP, dungeons, fractures, WvW, Raids, and guild specific missions to occupy your time. You can also choose different crafting classes such as a cook and smithy. The expansions are a one time buy, the first of which is the expansion of Heart of Thorns, in this expansions players will learn to glide through the world and unlock new specialization a for their classes! In the Path of Fire expansion players learn to use Mounts, and unlike other games these mounts have special skills associated with each. Raptors can leap, springers jump, skimmers float on water and so much more! The max lvl in this game is 80, each expansion opens a mastery option after 80 so you don’t need to keep refreshing your gear, instead you hone your abilities of gliding, mingling with the natives and utilizing your mounts in new and unique ways! The best part is that’s it’s not pay 2 win instead currency both in game and real life can be used to buy cosmetics! Everything but the expansions can be gained by grinding! There is so much more to touch on and so much more to say, but I open the floor to you all, the players! Go download Guild Wars 2, give it a honest try! See the world of tyria with your own eyes! -PC Game- 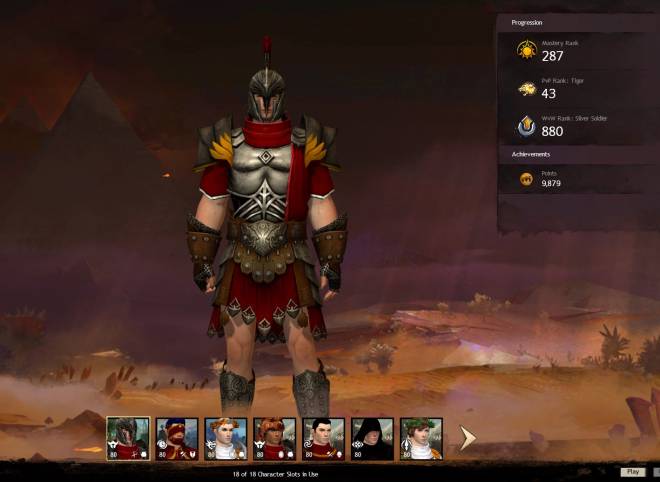 (My main character :b) Thank you for reading this far! Have a good day! :)