Free Suit of Armour for celebrating its 7th Birthday

To celebrate Warframe’s 7th anniversary, Digital Extremes are giving all Tenno a free armour set until the end of the month. Until March 30th, logging into Warframe will net you the free Dex Raksaka Armor Set, as demonstrated in the slick video. As detailed in an anniversary post, every three days there will be a new set of goodies to unlock by taking part in special alerts – including weapon slots, Dex weapons and cosmetics from previous anniversary events. 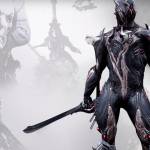