Greetings, Heroes!   We would like to give you a preview of our next update:   ● Additional Language Suppport   We here at the Development Team have received tons of feedback from you, dear Heroes. And we are very thankful for them as they have been very helpful to us in improving our services.   Majority of the feedback and suggestions we received from you revolved around the addition of more language options.   Currently we only have two languages available: English and Korean, and we are planning on expanding this to include Thai, Vietnamese, Traditional, and Simplified Chinese   We will focus first on the in-game messages and the game's UI for the language update.   Skill descriptions, Lore Texts, and Codex entries will still be in English in the meantime.   All aspects of the game will also be updated to have these languages afterwards.   ● Guild Contents   We are currently in the process of adding a Guild Raid feature to increase the numbers of activities that Guilds can participate in.   Introducing: The Crimson Dragon. A new Nemesis that can only be defeated by all Guild Members working together.   Prepare accordingly, Heroes. The Empire needs you! 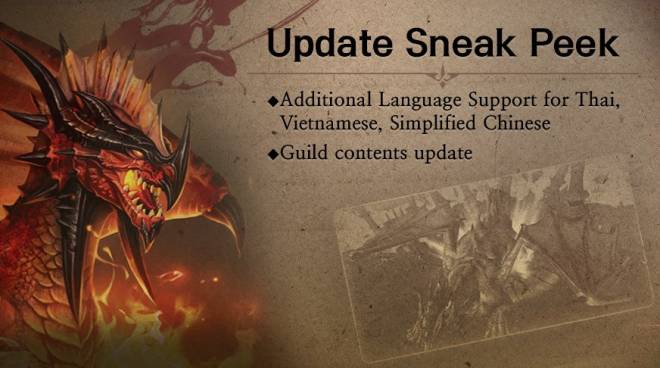