So after the 10.21 patch, divine received a rework and is now a very viable trait. I think it's mostly because it has a very easy build, starting from duelist, which can easily build up to divine.   Here are some pros of this deck. 1. Has a really strong early game because Duelist OP. 2. Doesn't fall off late game because of high value units. Ex: Yone. Les Sin, Warwick 3. You only really need three items to be honest. Static Shiv, Guardian Angel, and Quicksilver for Warwick. The rest aren't really necessary.   The downside of this deck. 1. It's a value deck, meaning you have to know when you're strong enough that you can start rolling and when to level up. 2. You need a Divine Warwick or Lee Sin to win late game. You need it for the 6 Divine trait. It's highly unlikely to get a Chosen 5 cost unit so Warwick mostly but Warwick has three options so it's kinda RNG dependent.   So how does this work? I recommend getting either tear or bow first. Static Shiv is your main dmg source so I recommend making it fast. Just a personal recommendation.   You start out with duelist and divine. Yasuo, Jax, Wukong, Fiora, and Nami. You use Wukong for the divine synergy with Jax and Nami for the enlightened with Fiora. Unless the other players have the god of RNG on their side and rolled a team of all two stars, you should maintain a winning streak. If you can make any of the core items mentioned above, give it to Yasuo or Fiora. When Warwick comes out from the shop, just move it all to Warwick.If you get any of the units mentioned above as chosen, just buy it. Early game chosen units allows you to have a win streak which is important in value decks.   So something like this would be a good early game. You can use Nami instead of Janna.

You should be level 6 around 3-2. If you're lucky, you have all three core items for WW, if not maybe next round. By now if you see Irelia and Janna, replace Nami and Fiora with them. Once you have 50+ gold, just press level up but until 50 gold. Try to rush 7. If you hit level 7, your comp should look like this. 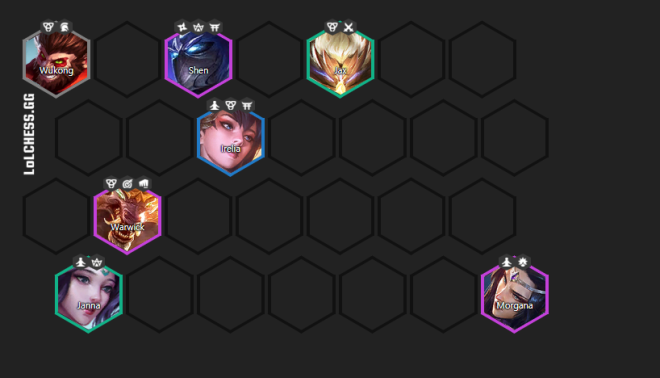 Assuming you had a win streak, your health should be above 75. Unless you met RNGesus himself. In that case not much you can do about it. If you have any chosen units, sell it. You only needed it for the win streak and replace it with whatever piece you need for the final comp. Depending on your health, you can slow reroll for a divine chosen WW, or just go for regular 2star WW and level up to 8. If you’re above average health in the lobby and you have money, slow reroll. If not, just go up to 8.

Once you hit 8, your comp is almost perfect, and you should roll for the chosen WW if you didn’t get it before, or Zilean and Lee Sin. If you’re really ahead and you want to guarantee a first place get Yone.