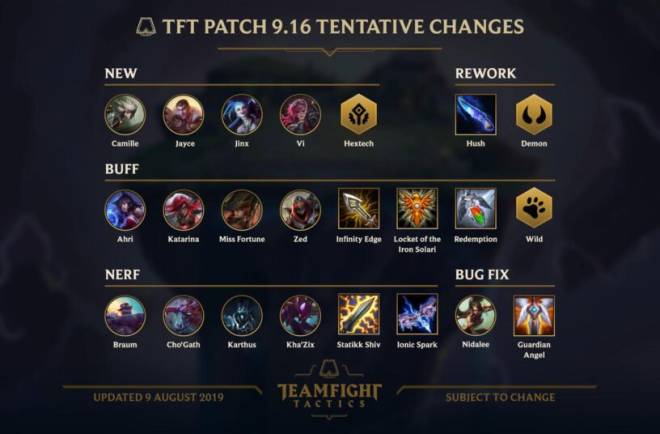 1. There's a new origin called 'HEXTECH' This newest addition to TFT will save you from your enemies' powerful items by disabling them with a bomb. Hextech bonus requires 2/4 units which is relatively easy to complete.   2. There are 4 champions that belong to Hextech origin -Camille: 1 Gold / Blademaster -Jayce: 2 Gold / Shapeshifgter -Vi: 3 Gold / Bralwer -Jinx: 4 Gold / Gunslinger   3. Demons got reworked. The demon buff has been causing several problems here and there since the beginning and so Riot decided to completely redesign the origin's buff fix this issue. Demons will now steal small portion of target's mana instead of draining them. Demons will still slow down your enemies from using abilities but not prevent them.   4. Hush prevents enemies from gaining mana. Hus also got reworked. Instead of silencing its targets, it now has a 33% chane to stop an enemy from gaining mana for 4 seconds. This should be pretty effective against sorcerer comps.   5. Karthus got nerfed again. His ability now costs more mana to cast. He now needs 125 mana instead of 85. He starts with 40 mana so it shouldn't be too hard to cast the first spell but the second one will be less likely.