How to make VOID comp work in patch 9.15

Void synergy can be pretty effective but only with few comps in 9.15 patch since their unique synergy mainly fits physical damage builds that rely on basic attacks to do damage.   However, Void units are so very easy to acquire. There's an abundance of Void units available even at level 1 and you can basically complete the full Void synergy at level 3.   1) Early Game: Void build in 9.15 can be very powerful during early game since you can get 3 void synergy which makes all your basic attacks ignore enemy armor. 3 assassin synergy will give you additional critical hits and bonus damage. and you can get Zed for 1 ninja synergy. it's a lot of synergies for early game. Once you reach level 3, look for Kha'Zix, Kassadin and Rek'Sai.   In the meantime, build up strong economy. level up and expand your team (2 more Assassins) 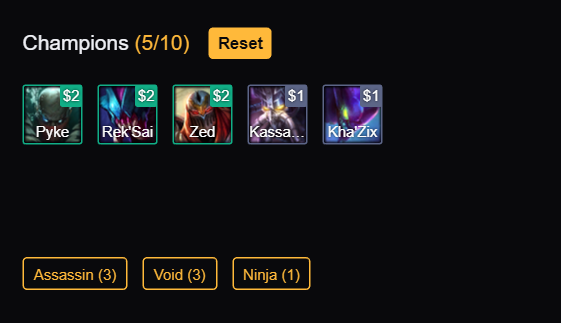 2) Mid Game: This build will fall off in power during middle since you have to wait till late game to get all 6 Assassins to complete this comp. So what you can do in the meantime is to run any additional Assassin you can and upgrade them. It doesn't matter which one, just use the higher ranking one over lower one. In case you get Akali, remove Zed and place her instead. 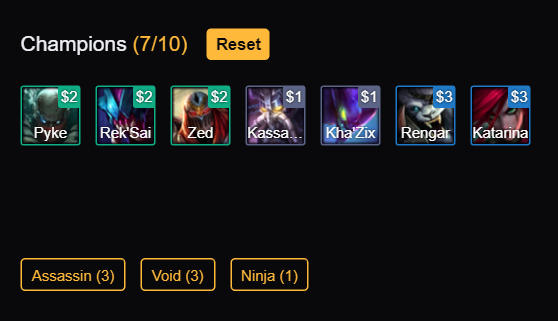 3) Late Game: This is when your 9.15 Void build will pick up the pace with other players as you begin to run the full Assassin synergy and other additional bonuses. Currently the best Void compe will include: Cho'Gath, Rek'Sai, Kha'Zix, Pyke, Katarina, Rengar, Akali, and Evelynn. You can add Swain at level 9 for more synergies. 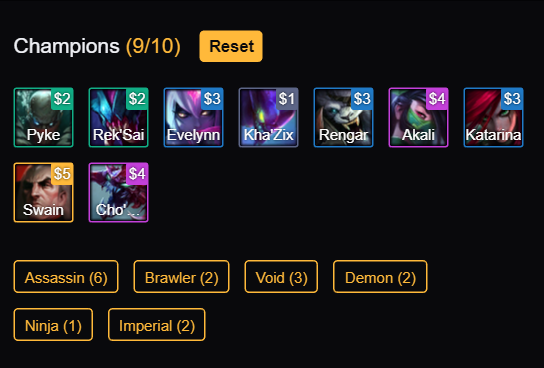 4) Ultimate Team: In case you get your hands on a Force of Nature and increase your team size to 10, replace Swain with Warwick and add Volibear. This will make your fronline virtually impossible to kill.