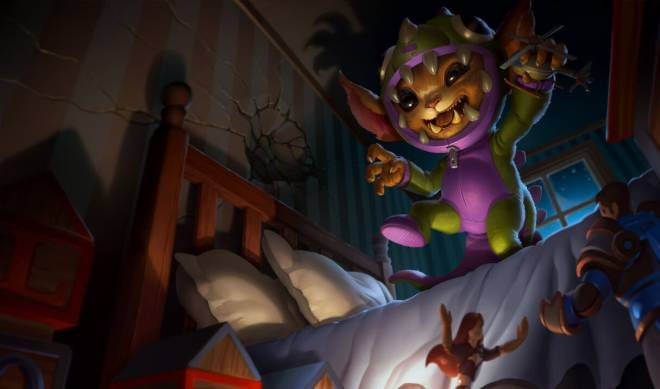 With a solid team of Yordles, you'll be dodge damage left and right. I know they appear all cute and cuddly but when they can cause some serious frustration when they start your opponents attacks. Throw in a bit of Gunslinger synergy to add DPS. This is an overall solid comp and relatively easier comp to put together compared to some of the more popular comps. 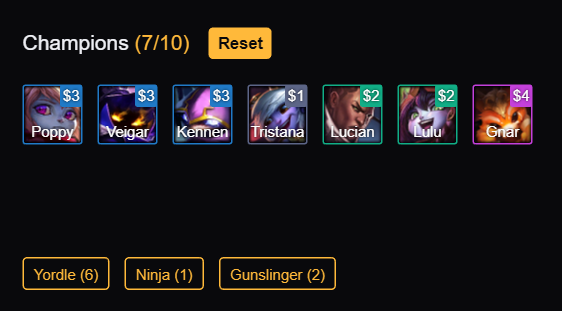 6 Yordles: Attacks against Yordles have 60% chance to miss 2 Gunslinger: After attacking, Gunslingers have a 50% chance to attack 1 other enemy 1 Ninja: Ninja gains +40% Attack Damage   POSITIONING: With this comp, you'll stick to pretty standard back corner positioning. You want to avoid Assassin jumping in on your main Champions. In this comp, Tristana and Lucian are the most important champions you wanna protect. If you can get your hands on Gnar, he'll make a pretty good tank.   EARLY GAME: Try to grab on-hit debuff items for your Gunslinters ASAP. With Red Buff, you'll spread debuffs to all units in your enemy team and it also prevents them from healing. (Red Buss = Chain Vest + Giant's Belt). You'll also need Guinsoo's Rageblade & 2 Curse Blades. You wanna equip Lucian with Hush and Sword Breaker.   You're most likely to find Tristana first, then pair her with Lucian for early Gunslinger buff. You can also find Lulu, Poppy, Veigar and Kennen sometimes pretty early in the game. Try to get the 3 Yordle buff ASAP.   If you find your on a winning streak in the early game, roll aggressively and find Tristana. Get her to 2 star quickly. If you're really aggressive, you might even get her to 3 star.   MID GAME: At this point, just focus on finding Yordles. Level up your units as much as possible. Create some debuff items.   LATE GAME: Your main objective here is to find Gnar! The sooner you find, the more likely you'll get him to 2 star. Once you get to 2 star, don't bother trying to go any higher. If you need an 8th Champion, consider a Sorcerer like Aurelion Sol or Karthus.