The update of Warships Fleet Command ver 3.0.3 is complete, and the changes are announced below.     1. Hotfix (1) Fixed a bug where the reward amount of PvP was shown as the reward amount of a higher rank. - The amount of rewards has been paid according to the current rank. (2) Fixed a bug where the effect of the consumable 'Repair dock' was added instead of being applied as a percentage.     2. New contents (1) New frontline added - New frontlines from 4-1 to 4-5 have been added.   (2) New warships added - 3 French warships have been added. - [Jaguar] The French destroyer Jaguar is a destroyer armed with a slow-fired but high-penetrating main gun. - [Emile Bertin] The French light cruiser Emile Bertin is a cruiser with the armor of a destroyer, but can speed up to about 40 knots. 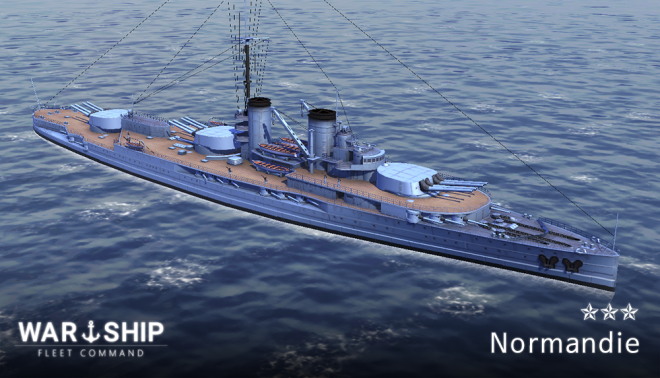 - [Normandie] Normandie battleship had been planned to be armed with a quadruple turret, a characteristic of French battleships, but was not finished due to the outbreak of World War I.     (3) New synergy added - 'La Royale', a synergy effect for French warships, has been added. - 'La Royale' increases the number of rounds per minute of the battleship's main weapon.     2. Changes (1) Season 2 PvP Start Schedule - Season 2 PvP starts at 00:00 (UTC+0) on December 4th.   (2) Changes related to PvP - Ticket sales of PvP participation will be discontinued. - The number of diamonds awarded for winning PvP has been increased from 5 to 20. - Points earned when winning PvP have been increased, and Points lost when defeated have been reduced. - The PvP win streak reward has been changed from Diamond to Test report. - PvP 10 win streak rewards has been increased.   (3) Description changed for squadron tactics - In squadron tactics, the incorrect description of elite squadrons, strength prehension, and scuffles that operate based on the flagship has been corrected. - The descriptions of the other squadron tactics not only the above squadron tactics have also been amended to make it easier to understand.     4. Plans for upcoming update (1) Fortress Battle, a PvE mode, will be added.