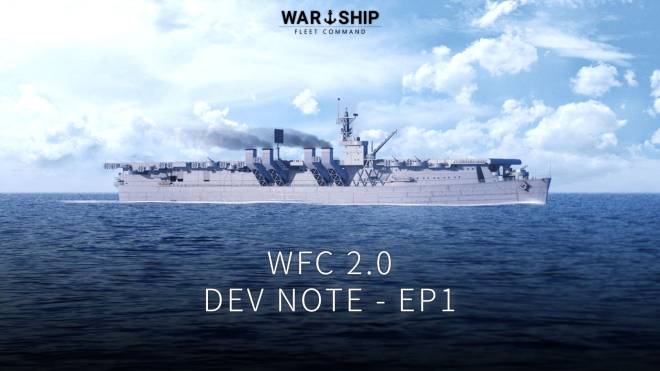 1. Overview on the update - We are working on WFC 2.0 to fix various issues found over time and preparing the game for the right direction. Please understand that it is taking longer b/c the update includes all the resources used in the game, the UI, the system, and new contents. The following contents introduce new contents to be added in WFC 2.0, and also say about the problems we have considered and solutions for them.   2. New contents With WFC 2.0, the leveling of buildings and new contents suited for the concept of each building will be added.   a-1. Naval command - 'War effort' content will be newly added. War efforts are divided into categories of policy, strategy, and technology, and tiers are unlocked according to the game progress, enabling you to improve base operation efficiency and to strengthen warships. 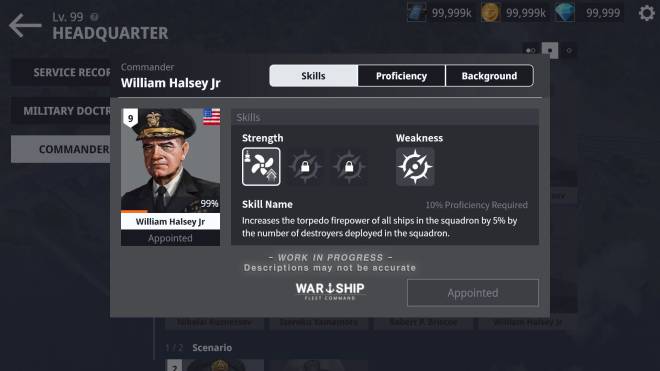 - You can strengthen warships of each squadron (old fleet) through the ‘Commander’ contents. Commanders obtain new skills as they grow, and this skill can further enhance the warship's performance based on specific warship types and formation locations.   a-2. Ports 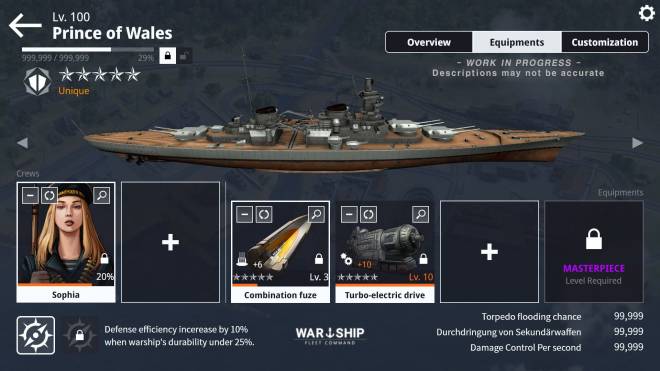 - In addition to managing all of the player's warships, equipment, and goods, a ‘supplying route’ system will be added in the port. You can use this supply route by assigning a squadron, and you can get specific resources and experience points(EXP).   In particular, depending on the members of the squadron, the quantity of supplies and the time the fleet arrives will vary, so you can use them to suit your playing style.   a-3. Factory - You can produce 'Steel plate', a new resource. Steel plates are to be used to strengthen newly reorganized equipment and to strengthen aircraft and structures of aircraft carriers that will be reorganized in the future.   - You can strengthen your squadron through the ‘Consumables’ system. Consumables will be consumed for each battle and can be used to cross hurdles or for special challenges.   a-4. Shipyard 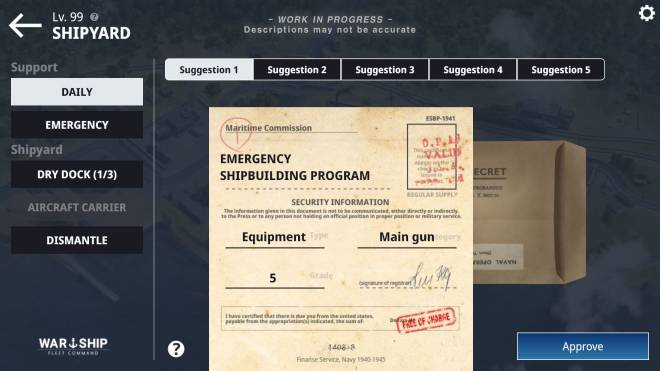 - In the shipyard, you can get one warship or equipment for free every day.   - In WFC 2.0, when starting frontline, the battle starts with all power restored. According to this change, the repair system has been removed and instead, an overhaul system is added to the shipyard to recover the fatigue of the hull, which requires periodic inspection of each ship.   a-5. Laboratory - In the lab, you can increase the quantity or enhance the effect of consumables produced in the factory, and a system that enables you to obtain new performance by researching warships that have reached the maximum level is to be added in the future.   a-6. Naval academy - You can recruit crews for free at every certain time at the academy.   - The crew's growth system is being added. After boarding a warship, a crew grows by gaining experience points according to battles. If crew is registered in the training slot of the academy, he can get some experience points for each battle without directly participating in the battle.   - The resources acquired through the retirement of the crews will be used for the war effort of the Naval Command described above and for the hiring of some commanders.   a-7. Battles 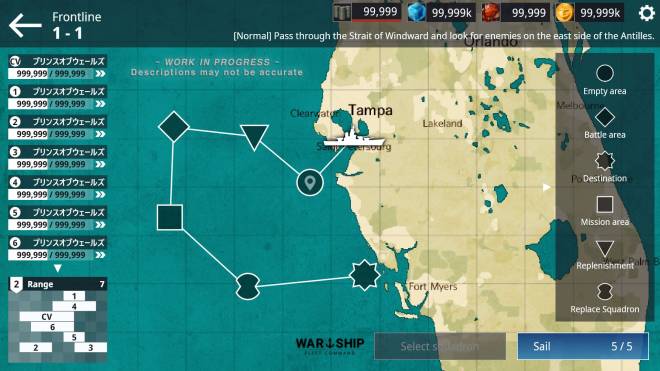 - Scenarios are added to the general battle (frontline) of WFC 2.0. You can meet different people through scenarios, enjoy interesting contents, and grow your fleet from this on.   - The combat system will be reorganized so that the damage determination in the game is affected based on the actual hit point.   - The types of tactics (AI) are further subdivided, and you can quickly change tactics through presets and custom slots.   - The flagship system is added, and you can control the flagship to maintain the formation and battle. Of course, it will be possible to leave the squadron as before and operate and join separately.   - In WFC 2.0, you can set the formation as you like. Unlike the slots that existed in fixed positions before, you can freely change positions on the tile, allowing for more flexible tactical settings. 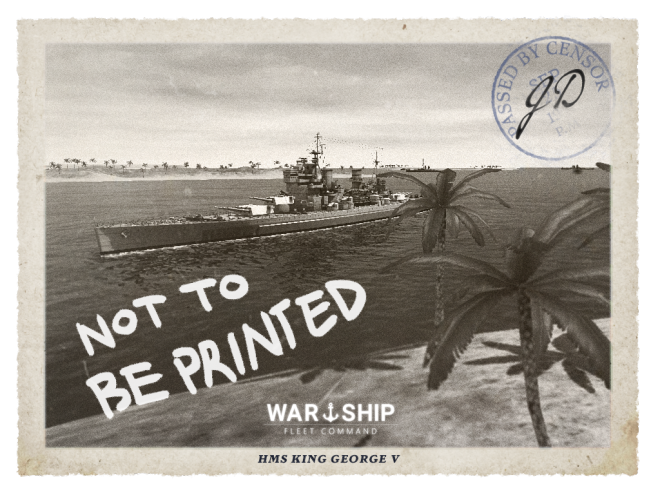 - Terrain elements are added to the battlefield, so you can protect yourself from enemy attacks or lure enemies to battle depending on the situation.   - A ‘Operation R’ system is added to the squadron, so the number of areas that can be moved in the route will be limited depending on the member.   - Depending on the ship type and star grade deployed in the squadron, the resources required to participate in the battle will change.   - Exclusive stats for aircraft carriers are added, and both the combat system and AI will be reorganized. Players who already have an aircraft carrier can use the aircraft carrier, but the full reorganization will be available through additional updates that will follow the WFC 2.0 update.   - Daily operations to replace Farming are added. You can grow your fleet with little time investment through daily operations.   - Two special battlefields are being prepared that can be attacked using multiple squadrons.   3. Existing WFC Problems and Solutions - In addition to the new contents to be added, the following changes will be made to solve existing problems.   a. Staged goods - Existing WFC had a lot of staged goods, which forced players to play repeatedly and invest time. And the complex resource structure greatly hindered new players from learning the game.   > Solution - 90% of existing goods were consolidated and classified into 8 categories. It will be reorganized to make it easier for anyone to understand the game and think of the actions that need to be taken to achieve the desired goal. Additionally, the value of the goods, which was difficult to judge due to the complex structure, was adjusted in the process of consolidation to enable rational value judgment.     b. Equipment and refits that are out of balance - Existing equipment was used in a way that inflates the already strong stats rather than supplementing the performance due to the fixed category according to the ship type and excessive % reflection. This problem abandoned warships that emphasized flexibility at the perimeter of the ship types, hence the diversity of strategies collapsed as well. And refitting forced random acquisition, making it difficult to obtain the desired stat, and this stat also had many overlaps with the equipment.   > Solution - Equipment and refits are merged and closed to change into a single equipment system. The new equipment is categorized into 6 categories, and each ship can freely equip up to 4 equipment for each category depending on its own completion level. And, some equipment has advantages and disadvantages together, so it is designed to balance the warship, and it is changed so that various combinations can be studied by mixing a % type increase and an absolute value increase.     c. Change of growth method - Previous warship growth forced repetitive battles, and player growth was focused only on warships. In particular, farming of materials such as completion and refittling was a big wall for the average player.   > Solution - The growth of WFC 2.0 is diversified into crews, commanders, equipment, consumables, bases, etc., away from the intensive growth of warships, and accordingly, the growth rate’ and feedback will be improved, and several new contents will be added that allow periodic growth without farming.     d. Similar interface and communication method improvement - Initial UI seemed a repetition of similar design, making it difficult for the player to achieve the desired purpose or to recognize the current location, and frequent network verification for a single change made it unpleasant to play the game due to frequent loading.   > Solution - WFC 2.0 makes it possible to easily match the name and function of each menu, with most UIs configured only with one depth. Additionally, by actively utilizing the pop-up UI, it is possible to achieve the purpose quickly without moving the space, and it provides a pleasant gameplay by optimizing the verification section and allowing you to freely play the game while the verification is in progress.     e. Undivided fleet and squadron, and low fleet utilization - There were few existing fleets to be called fleets, and even if we actually tried to gather several fleets together, there was no place to use them other than the expedition system.   > Solution - The existing fleet will be changed to a squadron, and the set of squadrons be defined as fleet. Each squadron consists of 6 warships and 1 aircraft carrier just like the previous fleet, and in order to enhance the squadron’s concept commanders, flagships, squadron control, squadron tactics, and squadron consumables are being added. The utilization of squadrons will be increased as well by replacing squadrons within frontline or by adding battlefields that utilize multiple squadrons. Moreover, it is planned to change the movement and consumption of materials in frontline according to the members of the squadron, and induce them to flexibly organize squadrons according to purpose.     f. Reorganization of existing content - Existing contents such as crews, naval bases, aircraft carriers, synergy, camouflage, and signals have not been maintained for a long period.   > Solution - In line with WFC 2.0, all contents will be updated. To make this happen, a total inspection was conducted on each content and reorganized.       4. WFC 2.0, the purpose and expected effects - The initial WFC has implemented indirect solutions such as adjusting the balance and adding contents and functions only, rather than structural improvement, from the beginning of the service. But as this method continues, it’s become difficult to manage and the harmony of the contents broke, which is a big stress for the players. WFC 2.0 is an update made after thorough inspection and reorganization of all contents to fundamentally solve this problem. In the near future, each player will be able to easily set goals and perform them, so that they will be able to enjoy more popular fun. Especially, it is expected that various naval battle-related contents centered on scenarios can scratch the itchy spots of military fans. There is still a lot of work to be done, but we will do our best to achieve the above goals and improve the level of completion. Thank you.   WFC 2.0 Update coming in late April. Thank you.