World of Warcraft has many ways to play it and has plenty of opportunities to get immersed into different parts of the game. Everyone develops different objectives for their characters and players even make characters specifically for doing one thing, at times. Once you get bored of doing something, there's something different you can do. For me, this "new thing" to do was making money in the game. I gave myself a goal to make enough money through engineering and farming materials that I'd sell on the auction house so I can play for free buy getting the WoW Token every month (currently sitting at over 100,000 gold for a single token). It's a difficult task to accomplish but with the power of a few great addons, the auction house became my best friend and I was selling all sorts of random items at great prices and I was reselling things in smart ways for profit. Things were looking great. Then WoW got an update and so did the auction house. 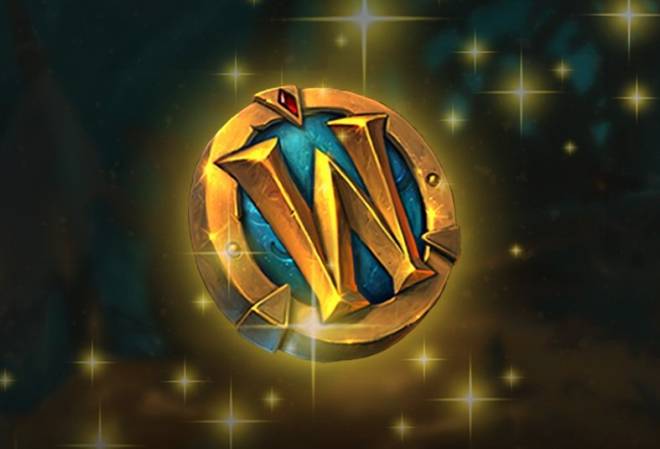 (Wow Token)   As someone who "played the auction house", I was constantly following different routines to make money and I was successful because of great decisions I was making. The new update ruined that for me (and many others, as well). To start off, the biggest problem I found was the taking away of bids on most items. Before the update, the auction house required you set a bid price, but not a buyout price, opening up opportunities for great buying and selling. When selling items, it gave the option to sell items at their "maximum" value or at least for the most people were actually willing to buy it for. All you had to do was set a bid price and no buyout. Someone may place a bid, guaranteeing you money. If someone else wanted it more though, they can just bid more, giving you more profit to look forward to. As long as you're happy with the minimum bid price, you're set (extremely good for items like gear or less-commonly seen items on the auction house). The other big advantage to bids was something called "sniping". "Snipers" on the auction house are players who look for a mistake - or just foolish - listing on the auction house that can return profit. Someone may want to sell something for 100 gold but may miss a "0" and set it to 10. A sniper - usually with the help of an addon - would find this listing, buy the item for 10 gold, and sell it for a little less than the lowest price on the auction house, giving them a major profit just for finding something. Sniping bids was rarer, but occasionally someone would set an item at a proper buyout price but forget to set their bid up. My personal best snipe was a battle pet, which are great targets because of the lower likelihood of them selling. I found a "Feathers" selling for a buyout price of 2000 gold and a bid of only 1 gold! I managed to set the bid, and no one noticed, saving me 1999 gold and guaranteeing me a major profit when I sell it!   The bigger the bulk of the items, the more likely you were to find great snipes, also. Items selling for 1 gold each would appear on the front page of the listings and items selling for 200 gold (in stacks of 200) would be cheaper. Many times, you would be able to find - through the help of addons - some snipes where bulks of 200 were selling for 50 gold, for example. You're basically spending 25% of what you'd spend on single items and you can resell each item to make a profit on 200 items! Do that a few times and you could make hundreds to several thousands of gold! 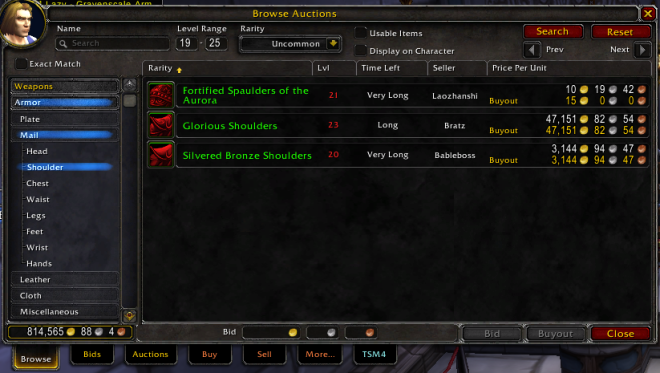 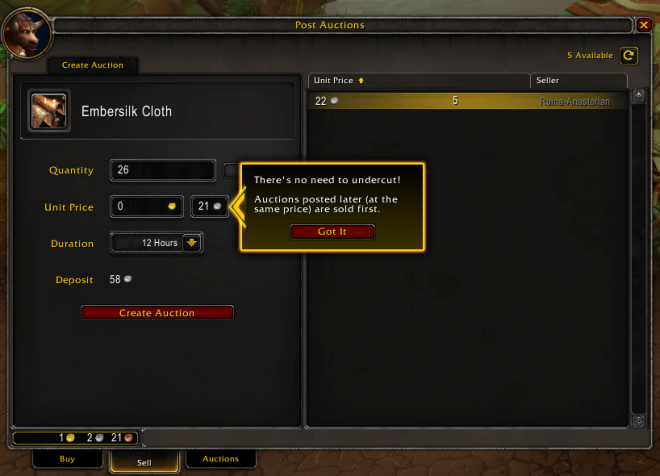 (New Auction House)   There's only 1 glimmer of hope for the auction house players, now. The first one being that someone sets their items for a cheaper price by accident like in the past. If we can find 100 gold items selling without an extra "0", still, then we can still snag some 10 gold items and resell them for some serious profit. Aside from that, we must start relying on other methods of making money. It's time to look towards crafting, possibly. A popular method of the past that will have to become more widely used is buying the cheapest materials possible and crafting something more expensive that people actually buy. Sometimes you can find copper ore for 1 gold each and copper bars selling for 2 gold each. It's some minor profit (unless you find hundreds of copper ore at these prices)... but it's still money. It's just going to take some getting used to and some luck with finding the right priced items. One thing is for sure though. The auction house just got a lot better for the typical seller and the snipers just got a huge blow throw at them.