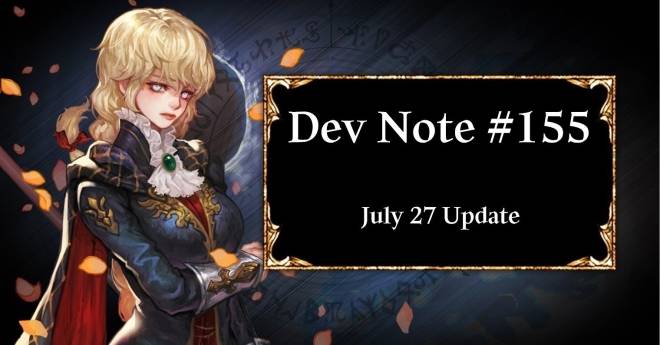 Greetings, Heirs.   We'd like to share details regarding the July 27 update. Fire/Water/Forest/Light/Dark Yarane's skill effects have been buffed across the board and Water/Dark Sinistra' Relation Effect has been changed.   ⭕️[Servant Balance Revamp] ​ Yarane Upgraded​ Yarane was both a Ranged AoE DPS Servant and a Melee DPS Servant that prevented targets from being Shielded. Her versatility instead hindered her, finding her without a spot on most comps in both PvE and PvP. That reason led us to revamp her as a solely Melee DPS Servant to up her ability to both deal damage and survivability.​   Skill 1: Losing Sanity​ With Yarane's Combo Skill being AoE DPS, her Skill 1 and Skill 2 both did AoE DPS. To increase the usefulness of Skill 1, "Skill 1: Losing Sanity" has been revamped to be an AoE DEF Ignore attack. The amount of damage has also been adjusted to be in line with being an AoE DEF Ignore attack.   Combo Skill: Tail Whip   Yarane's Combo Skill Hit has been updated from 4 Multi-hit to 5 Multi-hit with an Avatar equipped. Light/Dark Servants will have an additional 70% chance to stun all enemies.     Passive Skill​ Passive Skill Breath of the Wild, which blocked Shields, has been removed. It has been changed to causing attacks from a weaker element to land as Glancing Hits. For instance, Water enemies will have their attacks land as Glancing Hits against Fire Yarane. For Light/Dark Yarane, attacks from any element enemy received will land as Glancing Hits.​   ⭕️[Water/Dark Sinistra's Relation Effect Changed] ​ Due to request, Sinistra's Relation Effect has been changed from SPD to blocking a target's Passive Skills.​   ⭕️[New Combine - Dark Ankou] ​ We've received many inquiries on new Combines, which were originally designed for newer players to more easily acquire 5★ Servants.   Due to its underutilization and feedback on unintuitive recipes, it was continuously updated and improved. This served as the reason for fixing the Servants required for first-time users (Fire Ignis, Water Mildred, and Forest [A] Sphinx).     However, new Combines have been continuously requested and we have decided to select and add Light/Dark Servant Combines each update. We thought users would be more eager to see Light/Dark Servants over Fire/Water/Forest Servants. This change will also allow users to more easily acquire Light/Dark Servants.   ⭕️[Lucky Box Purchase Limit Increased] ​ The previous purchase limit of 5 a week for 100 Million Gold Lucky Boxes has been raised to 10.​ 100 Million Gold Lucky Boxes can contain 5★ Servants and sees the weekly purchase limit raised.​ We are keeping a close eye on feedback from users. Other options that have been discussed include more gear or other item drops while reducing Gold in the Gear Dungeon, or increasing the number of 4★ Servants that are required to Fuse. Along with your feedback, we're continuously checking Servant usage rates after each update. Adjustments and tweaks will continue to be made in order to make the gameplay experience of Heir of Light as enjoyable and fun as possible.​​   Thank you.​​