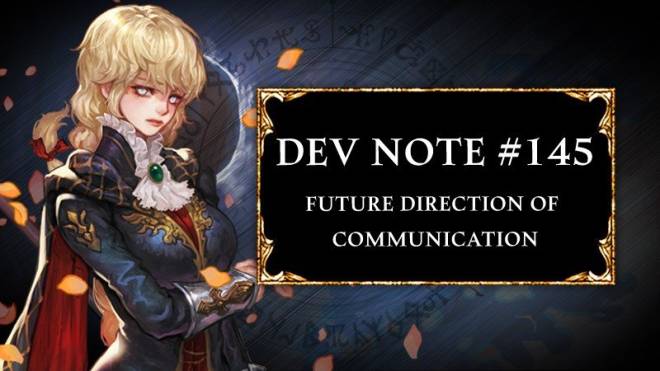 Greetings Heirs,   For today's dev note, we would like to discuss the future direction of communication.   We have continuously received many feedbacks and suggestions since the 1st day of launch. Some of these suggestions were updated instantly or after consideration, while others were not too difficult due to development conditions.   Due to many reasons, we were able to actively implement suggestions that many have suggested. We have been trying our hardest to make the best decision during each situation, however, it may have caused everyone to feel frustrated and even feel disappointed. We want to this time to apologize to all heirs.   We have always been debating and discussing ways for Heir of Light to be more enjoyable to many users. After many discussions, we came to the conclusion that we must give up the traditional ways and move forward with directions that many users want. Thus, from now on, we will be implementing more suggestions that we receive from the users.   As a start, we want to receive feedback from the users regarding the Update rewards for the 5.4 Update.   The vote for 5.4 Update rewards will be listed below and the top 3 rewards will be rewarded with the 5.4 Update.

Your Pick for the 5.4 Update Rewards

The vote will be conducted until February 2nd and rewards will be decided based on the total votes from all servers.   The vote will be taking place in the following communities.   - KR Community - Naver Cafe - KR Server - JP Community - Moot - JP Server - EN, DE, CN, TH, VI Community - Moot - Global, Asia, EU Server   Second, we want to share information about crazy support for servant growth. This is one of the planned content for the next update.   Many have voiced that the "growth" part is very difficult in Heir of Light. Also shared that the new and return players are in need of support. We agreed about this part and have debated on how to make it more fun while reducing the time required to grow servants.   Servant Transcendence can be achieved by shard farming and completing purification in the Purifying Grounds. However, gear farming is still one of the most difficult parts of the game.   You can increase your team spec and complete a higher level of gear dungeons and obtain a decent about of gears. But what about Skill Buns? Awakening Materials? Marks? Other in-game materials are still difficult to obtain which provides a hurdle in growth.   Thus, we have chosen a method that can help not only new and returning users, but also all users.   Treasure Chest and Growth Support Chest will be updated in the 5.4 Update.   The treasure chest is the concept that my servant purifies the contaminated parish. Basically, you can obtain T.shard, Gear Materials, Gold, and Special Summon Shards by just logging into the game.   The growth support box is a box that you can receive every day by selecting materials you lack even if you continuously obtain the Treasure Box. The growth support chest contains the following materials and can be obtained by selecting the item.   > Skill Bun > T.Shard > Awakening Materials > Rainbow Stone > Potential Enhance Stone > Potential Chance Stone > Conversion Stone > Mark Materials   One of the goals of the 5.4 update is to provide as much support as possible to help you guide towards the growth direction you desire.   Lastly, as mentioned above, we would like to actively receive and reflect suggestions from users.   From the conversations with users, we can see that many users understand how much time and effort are spent on an update. We will continue to receive feedback from users will continue to communicate with everyone. We may not be able to implement and reflect all suggestions but will implement more feedback into Heir of Light. Suggestions may not be implemented right away but will steadily implement suggestions in future updates.   Thank you