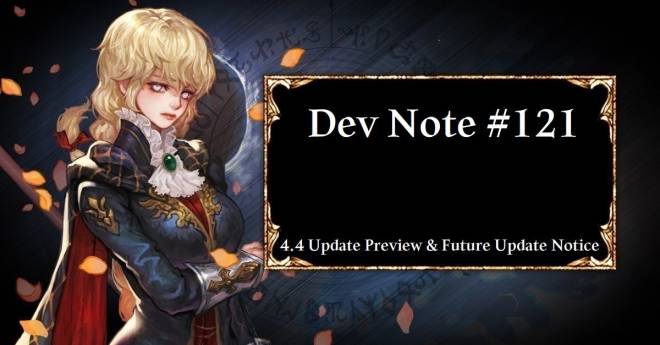 Greetings Heirs,   Today we will share some details about 4.4 Update that will take place towards the end of June.   ⭐️4.4 Update Details (Expected end of June)   ⭕Regarding Guild War   It’s been around 2 months since we launched Guild War beta on April 20th. Our initial plan was to hold 1 ~ 2 months long beta period to collect data. However, we decided to extend the beta period as we felt the need to improve Guild Wars in general and collect more data.   We will continue to improve Guild War with future updates. Below are some updated details about Guild War changes that will take place in 4.4 Update.   ⭕Guild War Shop Open   As we mentioned in a previous Dev Note, we will be adding new items that Heirs can purchase with Guild War Points. Heirs will be able to purchase Light/Dark Bastille Shard, T.Shard, Valor, ★3~5 Summon Stone and so on. Guild War Points that Heirs obtained previously will be reset upon opening Guild War Shop. (While many Heirs asked for compensation regarding Guild War Points, we decided that we need to simply remove previous Guild War Points as there will be a major balance patch. We hope the community understands.)   Usually the update takes place on Monday CDT, so please make sure to claim Guild War Rank Reward for Sunday before the update. Please note that you won’t be able to claim Rank Reward (Including Karats) if you don’t claim the rank reward before the update.     ⭕Guild Purifying Ground   > To encourage participation of Guild War, Guild Members that didn’t participate in Guild War won’t be able to use Guild Purifying Ground. > We determined that it is too easy to farm for servants with low transcendence in Guild Purifying Ground. Current 2 Transcendence limit will be increased to 3 Transcendence. > We noticed that many Heirs are suffering Valor shortage as we added Guild Purifying G round. Valor cost of Purification will be decreased from 4 to 2.     ⭕Guild War Relation Effect Transcendence Limit Added   Relation Effect Activation Limit based on Transcendence difference that was implemented in PvP content will also be applied in Guild War. (Sniping Relation Effect won’t activate if the Transcendence difference is three and above.)   ⭕Light/Dark Bastille Added   We are trying to provide more opportunities to use servants that are not used in PvP contents. This is why we designed Light/Dark Bastille that specializes in Guild Contents.   Light & Dark Bastille has passive that specializes in Guild content. They will be very powerful in Guild War.   ⭕Guild War Added to Servant Statistics   Currently, we provide information of which servants are useful in certain contents, and which gear sets are viable for certain servants through servant statistics. We will be adding statistics of Guild War Throne Room, Chapel, and Tower starting 4.4 Update so that Heirs can find out which servant is useful in Guild War.   ⭕Region Passive Change Notice   We implemented a Guild War Passive in Guild War so that servants that are neglected in PvP contents can also find their place in Guild War. Currently, there are separate Passive for Throne Room, Chapel, and Tower on top of AoE damage Reduction Passive that applies in all battlefields.   To test more variety of Passives, we will be changing the Passive as below.

⭕DEF Team Placement Schedule Change for Guild Master   Currently, DEF Team Placement takes place between 00:00 ~ 11:00 Wednesday and Sunday. We have been getting feedbacks that Guild Masters are not getting enough time to place DEF Team.   We determined Guild Members are getting relatively enough time for DEF Team management. Therefore, starting 4.4 Update, DEF Team Management will take place until 18:00 the day before Guild War, and DEF Team placement will take place from 18:00 of the day before Guild War to 11:00 of the day of Guild War.   ⭕Guild War Matching Standard Changed   With the update on June 8th, we expanded Guild War Matching range so that Heirs face the same guild less than before. With 4.4 Update, we will be changing the Guild War matching system so that Heirs don’t get matched up with the same Guild consecutively.   ⭐️Cool Down after Active Skill Reduced   Servants are prevented from using another skill for 5 seconds after using a skill. With general increase of SPD stat for servants, servants were able to refill Skill Gauge of Combo Skills during this 5 second cool down, preventing servants from using Active Skill since usage of Combo Skill is prioritized. This led Heirs to only focus on performance of Combo Skills, neglecting some very useful Active Skills.   With 4.4 Update, Cooldown after using Active Skill will be decreased from 5 seconds to 2 seconds so that Heirs can utilize different skills. (Cooldown after using Combo skill will remain 5 seconds. Heirs won’t be able to use any active skill for 5 seconds after using Combo Skill.)   We believe that this change will impact servant balance to certain degree. We will review the impact closely after the update for any necessary changes.   ⭐️Community Module Removed   Currently Heir of Light supports Moot module in-game. However, we decided to remove this module not only because it was rarely used but also because it can damage the stability of the game.Heirs can still visit Moot through Banner or Options just like before even after we remove the module.   ⭐️After 4.5 Update   ⭕Removing Tower Invasion   We have been maintaining Beta stage of Tower Invasion for two years since the launch of Heir of Light. Heirs have been showing constant love for Tower Invasion. However, due to low participation in Tower Invasion, we decided to remove Tower Invasion instead of making additional changes.   Therefore, we will be removing Tower Invasion with 4.5 Update. Heirs will no longer be obtaining servant shard by defeating an opponent. Rank Reward will be included in new contents in the future.   Also, we will be returning 100% of the Honor Points spent on Interior.   It was a difficult decision for us to remove the content that we worked so hard on. However, we determined that we must replace unpopular contents with new contents not only to provide better experiences but also to reduce stress of clearing different contents daily. While we understand the disappointment, we hope that the community understands.   Thank you.   Flynn