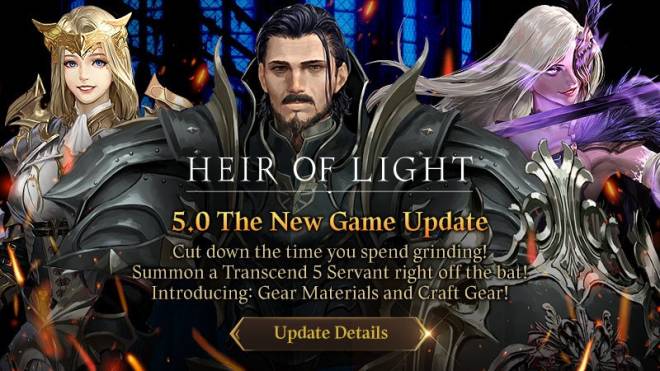 Greetings Heirs,   We are here with details of 5.0 Update. Please check out the details below for the latest change.   ◆Update◆   [Battle Skip Feature Added]

> A feature to Skip Battles in Explore, Mass Invasion, and Gear/Awakening Dungeons has been added.   1) Skip Feature Basics > The feature skips battles and allows you to quickly obtain materials and items you desire. > You can Skip battles with "Energy" > The skip feature requirements are listed below and once all requirements are met, the skip feature will unlock automatically. ▶ Skip Allowed Contents and Skip Requirements

2) Energy > Energy is an entry ticket that is used in Explore, Mass Invasion, Gear & Awakening Dungeons. > The energy will refill 1 per minute and the basic maximum amount is 120. > The Daily Karat Pack and All-In-One Pack will increase the maximum energy amount upon purchase. (+180 for Daily Karat Pack & +400 for All-In-One Pack) (The maximum energy amount can go up to 700 upon purchasing both Daily Karat Pack and All-In-One Pack)   - How to Obtain Energy > Similar to Valor and PvP Tokens, Energy can be purchased in the "Purchase Ticket" Tab. > You can also obtain energy from Quest Rewards and Events. > The energy purchase with karats is limited to 4 times per day. The price of energy will increase from 50, 100, 150, and 200.   - Free Energy (Ads)

> You can obtain 50 energy per Ad view and limited to 2 per day. > You can obtain free energy from watching Ads by accessing through "Purchase Ticket" - "Free Energy"   3) Changes and Additions due to the release of the Skip feature - Explore and Dungeon Drop Changes

- Mission, Game Guide, and Quest Completion with Skip > Mission, Game Guide, and Quest that requires "clear" (Attempt/Complete) and "obtain" can be completed with Skip.   - Revive disabled in skippable contents > Revive is not allowed in contents that allows Skip (Explore, Mass Invasion, Gear & Awakening Dungeon) > All Missions that require "Revive" will be removed.   [Gear Craft Feature Added] > The Gear craft feature has been added where you can craft gears you want with "Gear Material" and "Gold"   1) Gear Craft Location > Energy cost per floor and repeat rewards are listed below.

> Mass Invasion Date: After 5.0 Update ~ 11/8 23:59 (Server Time)   [New Combine] > The combine materials for Fire Ignis, Water Mildred, and Forest [A] Sphinx have been changed. > The Light/Dark servants will no longer be included as the material servants. > The new ★4 servants combine has been added as listed below. 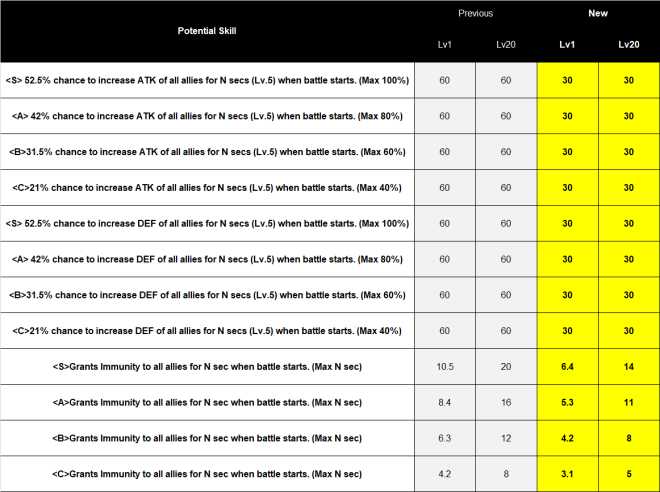 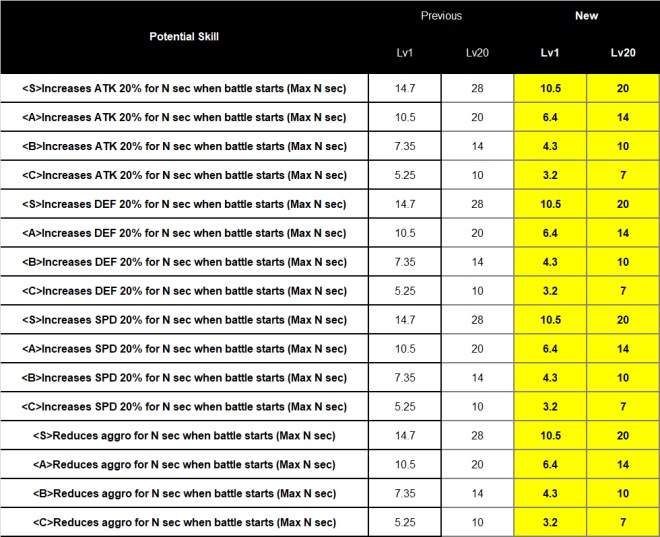 [Mysterious Dungeon Improvement] > The entry count has been reduced but increased the servant shard reward you receive upon clearing the stage. However, the boss's level has been increased to increase the difficulty of the stage. > Changes - Max Clear Count 400 Times → 200 Times - Increased Servant Shard 2x Reward - Increased Mystery Dungeon Boss Difficulty - Revive Disabled ※ Skip is not available in Mysterious Dungeons. Only Auto-Repeat is available.   [Gear related Improvement] 1) The price of gears have been adjusted. > The gold price for purchasing/selling Life, Beast, Blade, Eruption, and Iron gear has been increased. > The gold price for purchasing/selling Skill, Resistance, and Vampyre gear has been decreased.   2) Gear Drop Changes > In areas where level 19 or below bosses appear will only drop Life and Beast gears.   [Battle AI Improvement] > The battle AI has been changed to improve the situation where the servants would use skills that do not fit the battle situation during auto-battle.   [Guild Improvement] 1) Guild Contribution Added > "Contribution" has been added to check how much each guild members have contributed donations to the guild. > You will receive 1% of the Guild EXP you increase per donation as your contribution. "> You cannot use your guild contribution nor give it to other guild members. The contribution points will disappear upon leaving the guild." > Guild contribution points can be viewed by [Guild -> Guild Members]

※ Quests that have already exceeded the number of completions due to quest changes will be completed by completing the quest at least once.     2) Quest Reward Improvement > Chapter quests have changed as listed below 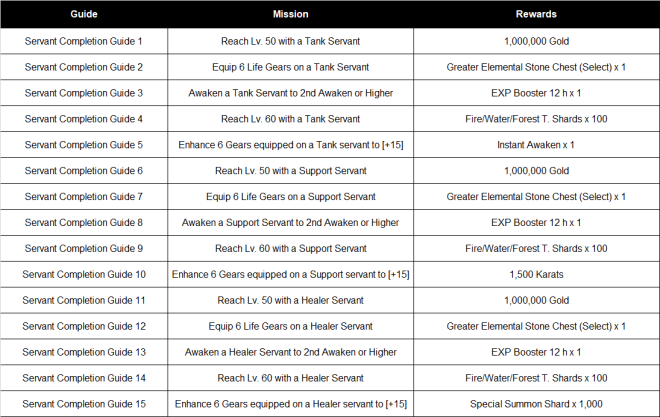 ※ Even if you are in the process of "Level Up Guide" and "Servant Shard Guide", you can proceed with additional quests after the update. However, existing quests will be deleted.   [Unlock Requirement changes for Daily and Weekly Missions] > The unlock requirement for Guild Dungeon, Guild War, and Purifying Grounds related Daily/Weekly missions have changed as listed below.

[White Modeling Adjustment] > The Tower of God Servant, White, modeling has been adjusted.   [Notice regarding Gear Inventory Added] > A notice will be displayed as listed below when attempting to claim a gear from the mailbox even though your gear inventory is full.

[Valor Refill Upon Level Up Changes] > The valor refill upon level up has been removed due to the Skip feature.   [Notice Upon Level Up Changes] > The notice upon level up has changed due to the removal of valor refill upon level up.   [Basic Servant Inventory Capacity Increased] > The basic servant inventory capacity upon creating an account has been increased from 30 to 100.   [Repeat Reward/Shard Reward Pop Up Improvement] > The pop-up display upon reaching Max Repeat Reward and Shard Reward Count from explore has been changed to display with more transparency   [Water Ifrit Passive Text Improvement] > The text for Water Ifrit's passive skill has been changed to be more detailed. (Text Changes Only)

[Game Guide/Quest Text Changes] > Some of the texts in Game Guide have been changed: (Prev) Awakening Stones → (New) Element Stones. > Quest text for all elements and all chapters have been changed: (Prev) Clear an Explore stage → (New) Clear a stage   [Tutorial Activation Requirement Changes] > Some of the requirements to activate a tutorial that starts upon the death of all allies have been changed. > The tutorial would activate upon the death of all allies during Auto-Repeat & Consecutive Battle.   [Combine Servant Summon Animation Improvement] > The animation upon obtaining servants from Combine will display the same as obtaining a servant from Fuse.     ◆Shop◆ [New Pack Added]   1) 5.0 Update Celebration Pack Added

> 5.0 Update celebration packs are added and they can be purchased in the Packs. > Details of each 5.0 Update pack are listed below.

> The original Gear Pack is removed and Gear Material Pack has been added. 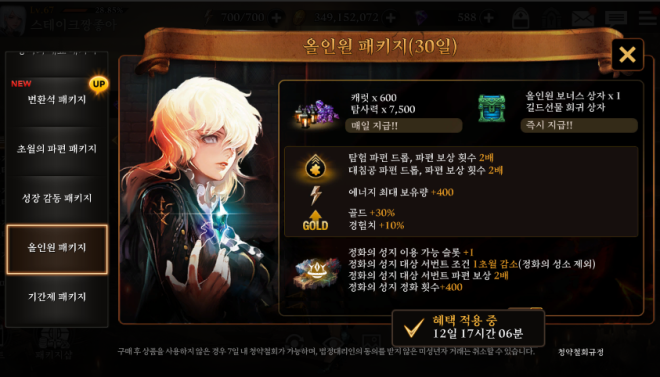 > The All-In-One price will be $49.99 during the special sale event and will be back to its original price of $69.99 on the November Update. The new benefits are listed below.

> The benefits will change for those who have purchased the All-In-One Pack before the 5.0 Update. 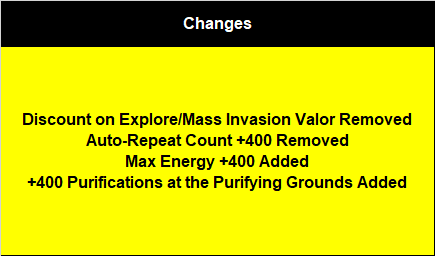 ※ The daily 500 karat reward will remain the same until the duration of your pack and will be changed to daily 600 karats upon repurchasing the All-In-One Pack after the expiration of the previous All-In-One Pack. ※ You were able to repurchase All-In-One when your All-In-One had 15 days of remaining duration before the 5.0 Update. However, the repurchase is temporarily disabled. The repurchase option is planning to be enabled after the 5.0 update.   [Pack Changes] > The time-based packs will change as listed below due to the Skip feature.

[Several Pack Purchase Requirement Changes] > The purchase requirement for Daily Karat Pack and Double Shard Pack has been changed as listed below.