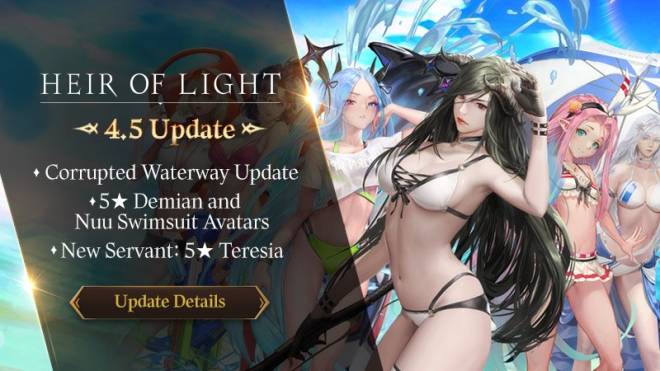 Greetings Heirs,   We are here with details of 4.5 update! 4.5 presents new content, Corrupted Waterway, a new servant, and 2 new summer avatars!   ◆ Update ◆ [Corrupted Waterway] * New content “Corrupted Waterway” has been added. * Defeat the mysterious Monuments in each of the waterways to purify the corruption! * The Corrupted Waterway snakes through the Fire, Water, and Forest Regions. * Each region is further divided into Areas 1-20. You may access these areas in ascending order starting from Area 1. * Rank Rewards will be handed out at the end of a season based on how much progress you've made for each Region.   [Corrupted Waterway Map]

① Top Ranking Display: Each Region will display its highest ranking user. Refreshes when accessing the Corrupted Waterway menu. ② Last Cleared Area by Region and Playtime: You will be moved to the corresponding location when tapping each icon. ③ Guild Member Display: The last location that you and your guild members cleared is displayed. A list of members is shown when you tap an icon. ④ Ranks and Rewards: You can see ranks and available rewards for each region. ⑤ See All: Enables you to see an overview of the map.   [Basics of Corrupted Waterway] 1) Season System

* Corrupted Waterway is a seasonal mode. Each season is made up of 7 days, and when a new season begins, any previous participation records will be reset. Sunday 12:00 AM End of Season   2) Basic Information * Please see the following table for basic information on the Corrupted Waterway: 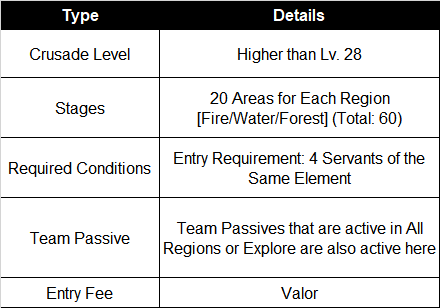 3) Battles * You may fight in any region of your choice, with each region having a Battle Prep button available.

* After you tap Battle Prep, you can find information on the Monument and Servant requirements.

* Failing to win within these 3 minutes will count as a failure. * Corrupted Waterway battles have the following conditions: * Consecutive Battle is available and ends automatically based on the following: 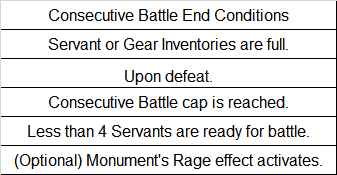 4) Ranks - Each Region has its own ranking table. Clearing higher Areas grants higher rankings. - Regarding users who have cleared equivalent Areas - The user with the faster clear time will be given the ranking. - "Clear time" is the collective sum of time it took to clear an area together. Ex. 10 seconds (1st attempt) + 15 seconds (2nd attempt) + 20 seconds (3rd attempt) = Clear Time of 45 seconds

5) Rewards * There are Clear Rewards and Rank Rewards for each Region. * When a season ends, rewards based on your rank by Region are sent to your Mailbox.

* First Time Rewards are also a part of Clear Rewards. They are issued only once regardless of the season. (They are not issued again even if a season is reset.)   ① Rank Rewards 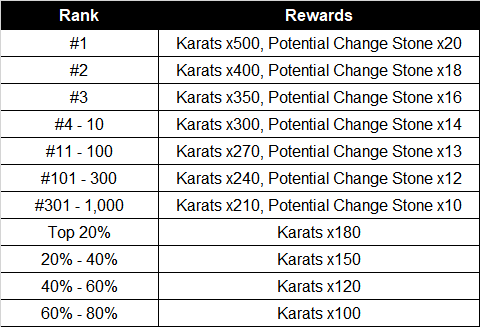 * Element Stones will have the same element as the region you cleared. * First Time Rewards are also a part of Clear Rewards. They are issued only once regardless of the season. (They are not issued again even if a season is reset.)     [New Servant: Teresia] * New Servant 5★ Teresia, Protector of Angels has been added. * The ATK/DEF/HP stats for Transcended ★5 Teresia are as follows.

[2 New Avatars] * 2020 Summer Season 2! 5★ Demian and Nuu’s Bikini Avatars have been added. * You can purchase the new Bikini Avatar at USD 12.99 during this promotion period. (Price includes VAT, based on Google prices) ◆ Quality-of-life Improvements ◆ [Crusade Unlock Level for Contents Adjusted] * The required levels for unlocking various contents have been adjusted as follows. * After the 4.5 update, Global Infinite PvP/Boss Raid/Abaddon rewards will not be sent until you've reached the required levels. * As the Tribute level has been changed from Lv. 10 → Lv. 11, you will not be able to receive Tributes after the 4.5 update if you're Lv. 10. But, you will be able to receive all the accumulated Tributes when you reach Lv. 11. 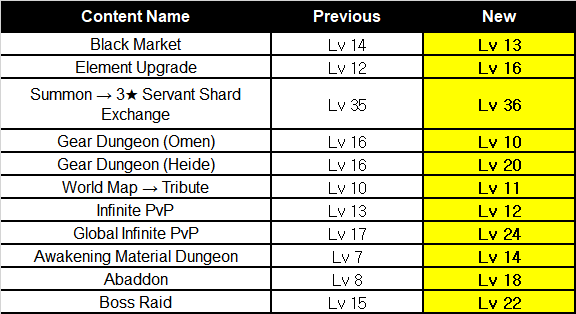 * There was a bug that showed Infinite PvP tutorial every time you entered World Map if your Crusade level was Lv. 12. The tutorial will stop popping up when you reach Lv. 13. This bug will be fixed in the future.   [Daily / Weekly Missions Improved] 1) New Missions Added * The following new missions have been added to Daily / Weekly Missions.

2) Mission-Unlocking Level Adjusted * As content-unlocking levels have been adjusted, Daily/Weekly Missions will also be adjusted accordingly. * Missions that require contents that are higher than your current level will be deleted from your list.

* Now you can send an invitation to an Heir individually by tapping on [Invite to Guild] on the lower left in the user info window. (The button will not be activated if you're looking at your own user info, or if you're not the Guild Master or Guild Officer of your Guild, and if the Heir is already in a different guild.) * Invitation will be sent as a whisper to the selected Heir. The cooldown will be activated. * If you have already sent an invitation to this Heir before, you can send it again when the cooldown has finished. (You are free to send your invitation to a different user)   ③ Guild History Display Improved * When a guild member joins and when a guild member is kicked or leaves guild, the guild history will be shown in the guild chat for all guild members.   [Guild War Throne Room Passive Adjusted] * The battlefield special effect of Throne Room in Guild War has been changed as follows.

* Root of the Problem, a battlefield special effect, has been changed as follows.

◆ Other Improvements ◆ [Mass Invasion Servants Changed] * Servants appearing in Mass Invasion has been changed with 4.5 update as follows. 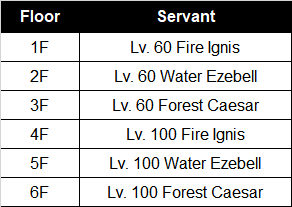 * Required Valor and Repeat Rewards per floor is as follows.

: Mass Invasion Date: After 4.5 Update - 8/15 23:59 CDT   [Purifying Grounds Improved] * The drop rate of Mark Gear crafting has been decreased, and the drop rate of Magic Stones and T. Shards have been increased.   [Inability of Bond Secondary Servant to Transcendence Guide Improved] * Now the game will display more clearly that your secondary Servant in a bond cannot be Transcended while in a bond.

[Level Up Benefits Adjusted] * After the 4.5 update, you will not receive PvP Tokens when you level up.   [PvP Battle Content Combo Skill Speed Adjusted] * Some users felt that battles took a long time, because the speed of Normal Active Skills and Combo Skills are different. Now Combo Skills will be sped up in PvP, Global Infinite PvP, Guild War, and Mock Battle.   [Abaddon Repeat Battle Text Adjusted] * “Repeat Battle” in Abaddon has been changed to “Consecutive Battle”.   [Game Guide Text Adjusted] * Game Guide → Upgrade Guide #8 has been edited to include more details.   [New Item: Ultimate EXP Bun] * When used as an enhance material, this new EXP Bun increases your Servant’s level to the current max level for the Servant’s star grade. Ex/ Used on a 6★ Servant → Servant reaches Lv. 60. Used on a 5★ Servant → Servant reaches Lv. 50 * Ultimate EXP Bun can be obtained from Events or purchased from the Shop.

[Servant Level Colored Display Improved for Visiting Users] * The name of the Servants that reached the max level are shown in yellow. Now visiting Heirs will be able to see the colored names in the user info.   [Edited Guiding Text for World Battle Level Limit] : The guiding text for World Battle level limit has been edited   [Avatar Improvements] ① Lucrecia Swimsuit Avatar : Fixed an error that caused a line on Lucrecia's face when the [Lifeguard, Lucrecia] Avatar was equipped.   ② Nuu's Avatar : Fixed an error that caused the skin on the shadowed area and accessories to look awkward when the [Pure Soul, Nuu] Avatar was equipped.   [Summoners War Collab Avatars No Longer Available for Purchase] : Exclusive Avatars for the Summoners War Collab Servants are no longer available for purchase to accommodate the end of the Collab Event.   ◆ Shop Updates ◆ [Corrupted Waterway Pack Added] : Corrupted Waterway Update Packs are now available at Packs. : Please read on details below for more information.

[New User Pack Added] : New useful packs for starts have been added. : These packs are displayed upon reaching Crusade Lv. 10 and fulfilling certain requirements. They can be purchased by tapping an icon on the left side of the World Map. : They will disappear and not be available for purchase if you do not purchase them within 24 hours of their initial display.

[Pack Price and Reward Adjustments] : Price and items in some packs have been adjusted. : Please read on details below for more information.   ① Regular offers (Available 24/7. Shop > Packs)