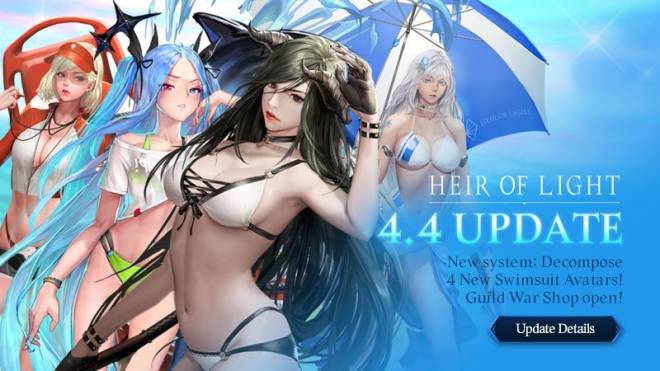 Greetings Heirs,   We are here with details of 4.4 Update. The Decompose System is finally here! Don't forget to check out the new Summer Avatars!   ◆ Update ◆   [Decompose System] : A New system, Decompose, has been added where you can turn unused servants into various resources! : The Decompose system will allow you to receive some of the resources that you have invested in your servants back by resetting your servant to the original state

① Requirement for Decompose : Decompose can only be accessed once per week for NAT 5★ Servants who are T1 or above. : Restrictions for Decompose is listed below. 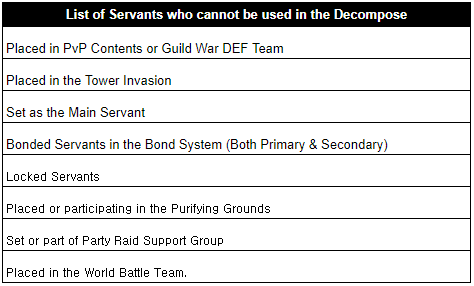 ② How to Decompose : You can decompose a servant by accessing the "Decompose" in the Servant Info Tab. (Dismiss Button will be displayed for servants who cannot be decomposed)

: Resources you can obtain by decomposing a servant are listed below:

: Collection and Collection Effect will remain the same after the Decompose.   [4 New Avatars] : 2020 Summer Bikini Avatars for 5★ Ignis, Aria, Lucrecia, and Mildred has been added. : Bikini Avatars will be under special promotional sale and will be available in the shop for $12.99 (Price is based on Google and sales tax is included) 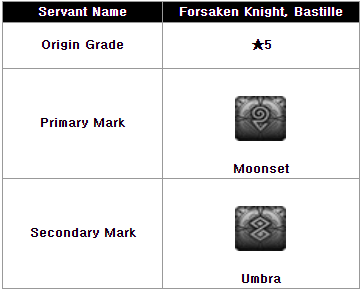 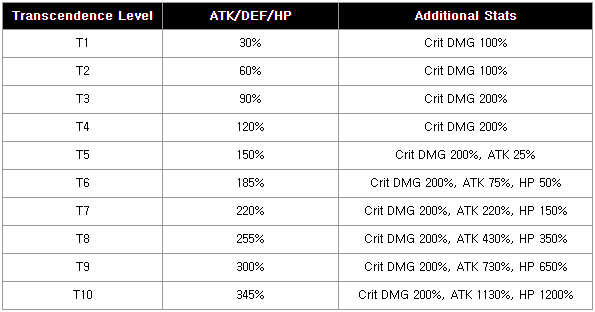 : If you are using the potential skills listed above, you can continue to use them. However, if you change the skill it will no longer be available.

: New potential skills will not be available for the following servants due to a similar effect in their passives.

[New Normal Potential Skills] : A potential skill, increase stun resist in PvP, that was removed in v3.9 Update has been re-added to [Normal 3 ~ 5] Potential Skill list. : The increase in the % per level has been increased and the skill stat for Level 1 and Level 20 is shown below. 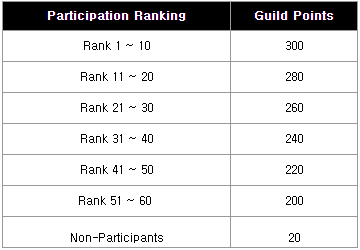 : Details of Effects in Battlefields are listed below

② Changes in Obtainable Gears in the Gear Dungeon Floor 1 ~ 3 : Gear Dungeon 1 ~ 3 will drop 3★ or above Gears and will no longer drop 2★ gears.   [Sanctuary Consecutive Battle Improvement] : A feature to auto sell gears during the consecutive battle in the sanctuary has been added. : The feature does not have an on/off option so it will automatically be in effect during consecutive battle.

[Gear Enhance Improvement] ① Gear Enhance Motion Reduced : An improvement has been made to reduce the time it consumes during the Gear Enhancement. Success/Fail motion has been removed and the enhanced result will instantly show.

② Gear Enhancement Level Display Improvement : The gear will no longer change color based on its enhanced level. The gear will retain its NAT color even if it's enhanced.   ③ Gear Enhance Success Rate and Gold Cost Increased : The Gear Enhance success rate has been drastically increased. The Gold cost per enhancement has been increased due to an increased success rate.   [Combo Skill Speed Change in IPvP] : The Combo Skill Animation speed has been increased to due to the Active Skill Global Cooldown.   [Global Cooldown Time Adjustment in PvP Contents] : The global cooldown time in PvP contents has been adjusted to the following

[Element Enhance Motion] : The motion during the Elemental Enhancement has been reduced. 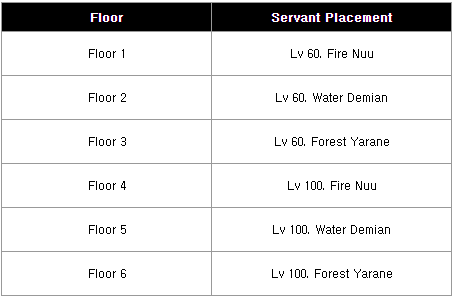 : Valor Cost per entry and repeat reward count are listed below

[New Craft Item] : A New craft item has been added in the Craft -> Servant Tab.

[Guild Notice and Introduction Text Capacity Improvement] : The max text capacity for the Guild Notice and Guild Introduction has been increased from 50 to 100 letters.   [5★ Servant Summon Message Improvement in the Chat] : The 5★ Fire/Water/Forest Servant Summon Message will no longer be shown in the chat.   [Text Revision for Healer's Special Potential Skill] : Special Potential Skill #4 Text description for Healers have been improved.

[Ticket Use Reward Removal] : The Ticket Use Reward in the Event Tab (previously Reward Tab) has been removed.   [Craft and Shop Limit related text Revision] : The text related to craft and shop limits have been revised to the following

ex) Previously: Limit n per 7 days. New: Limit n times per Week   [Frozen Status Icon Details Improvement] : The Fronze Status details displayed when the icon is touched during the battle are changed as listed below

[Moot Community Icon Removal] : The Moot Community Icon that floats around the Lobby has been removed. : To access the Moot Community, you can click Lobby -> Event -> Quick Menu -> Option -> Community.   [Item Description Improvement] : Items descriptions have been improved for Guild Points, Honor Points, Party Raid Points, and other in-game content items.     ◆Shop Update◆ [New Heir Pass] : The Mission Pack will no longer be available for sale starting June. An upgraded version of the Mission Pack, Heir Pass, will be available to all Heirs starting July. : You complete missions to obtain points and trade them for Free Rewards. If you purchase the Premium pass, you will be able to obtain more rewards that are located in the Premium section.

: Pack Contents other than listed above remain the same.

[New Beach Ball Pack] : A Pack where you can purchase to obtain "Beach Ball" that can be obtainable from the "Drop Event" : Unused Beach Ball will be converted into 20,000 Gold per Beach Ball at the end of the Event.

◆ Event ◆ [New Drop Event #1, Heir of Beach] : First Drop Event, Heir of Beach Event is open!   ▶ How to Participate : The Event Item (Beach Ball) will be dropped from in-game contents as a clear reward. Obtain the event reward and trade them for special rewards. : Access the Event Page by clicking Quick Menu -> Event : The Beach Ball drop rate varies based on each in-game contents and you can check the location and drop rates of the Beach Ball by clicking on "Location" : The unused beach ball will be converted into Gold at the end of the Event. : Event Item and the amount required per reward may vary per Event   ▶ Event Date