Greeting Heirs,   Here are the details on v3.3 Update of Heir of Light. Please see below for detailed information about the v3.3 Update   v3.3 Update Patch Notes Details:   ◆Update◆ [NEW Party Raid] > The very first real-time raid mode for Heir of Light! Party Raid has been added. > You can participate in Party Raid by creating a team of 3 players. You can invite your Guild Members, your friends or get matched randomly. > 3 Servants from each Heir will then form a 9-Servant Crusade which must face Boss Odette.   ▶ Party Raid Overview

① Creating a Party > You can create a party by tapping on [Create Party] at the bottom right of the Party Raid screen. > The user who creates a party is automatically the party leader. Party leaders can make their parties public/private, promote their party, invite/accept/kick party members, and start the Party Raid.   ② Quick Start > Join a party that has already been created for the floor of your choice. If there are no parties found, then you will be teamed up with other users who are also using the "Quick Start" feature. > If a party for the floor of your choice invites you while you're searching for a party, you will be automatically joined to the party without seeing an invite.   ③ Managing Support Teams > On your current selected floor, you can manage your team that will support other Heirs (friends and Guild Members). > The initial party that your friends / Guild Members used to play (for any floor) will be automatically saved as their support team. > After the initial party has been saved, the changes to their support teams will not be automatically updated or saved. You can manually change the saved Support Team info by accessing [Manage Support Team] on the bottom right corner of the Party Raid screen. > If you have access to the current floor, even if you have not played it yet, you can save your Support Team manually using [Manage Support Team].   ④ Rewards > View available rewards that you can receive upon clearing a floor. > Party Points are guaranteed, and you will also get one random reward out of the ones remaining. > The number and the type of items you can receive depends on the floor you have cleared.     ▶ How to Invite

> The Party leader can tap on an empty slot then the [Invite] button to invite friends, Guild Members, and other Heirs, or receive support from the saved Party Raid teams of other Heirs. > Invited friends can accept/reject your invitation. They can also accept your invitation through the invitation message in the chat window. ① Inviting Friends > Invite an Heir who's already friends with you.   ② Inviting Guild Members > Invite your Guild Members.   ③ Support Teams > You can receive support from Party Raid teams that your friends and Guild Members have saved. > You can receive up to 10 teams per day, and this resets at midnight daily.   ④ Promoting Your Party

> The party leader can tap on the [Promote] button in the battle prep screen to promote their party in their current chat channel. > Promotional messages can only be viewed in the [Normal] chat. > You can join the promoted party by tapping on the [Join] button in the message.   ▶ Battle 1) Battle Prep

> 3 Heirs will each deploy 3 Servants then select a Team Passive for one slot each. > Team Passives for "All Regions" and "World Raid" will be activated. > Team Passive that's been selected per slot (max 3) will be applied to all party members. However, if you have two or more identical Team Passives, only the highest Passive will be applied. > You can deploy identical Servants of identical Elements for 1F - 4F, but you will be unable to deploy identical Servants of identical Elements for 5F. > Relation Effects will be activated among all Servants in the party. > You cannot use [Block] while you're in a party. > When all slots (9 Servants in total) have been filled and all party members are [Ready], the party leader can tap on the [Battle] button to start the battle.     2) Battle Details

> Party Raids will last for 5 minutes. The timer will start at 05:00 and count down. If you cannot defeat your enemy before the clock reaches 00:00, you will lose. > The 9 Servants in the party will share all effects such as AoE buffs, debuffs, and skill effects. Team Passives and Relation Effects will be shared by all as well. (However, skill-related secondary Combo Skills and Global Cooldown Times will not be shared.) > When a Combo Skill is used in Party Raid, the standard special effects will not be used. Instead, Combo Skills will have motions exclusive for Party Raid. > When a Combo Skill is used, other Servants in your party will not use active or Combo Skills until the current Combo Skill has ended.   2) End of Battle > If at least 1 party member manages to survive and win the battle, all party members will receive individual rewards, and the party will be allowed to proceed to the next floor. But if the battle cannot be continued (lost connections, lags, and etc.), each party member might get different results. > If party members leave the party after the battle before the next battle starts, the party will be disbanded.   ▶ Rewards > Party Raid Rewards consist of Party Points and a random reward. > Each party member may receive different rewards for their random reward. > Party Points can be used to purchase items at [Shop] - [Party].   ※ Please be advised that Party Raid is currently a beta service for time being. As it is a beta service, you may experience inconveniences during your gameplay. Also, if you're using a device that has less than 1 GB internal memory and is older than iPhone 6 that's running on iOS 12, please be advised that Party Raid might not run smoothly on your device.   [Party Raid - Added to Daily / Weekly Missions] > Party Raid has been added to Daily and Weekly Missions. > Mission details and rewards are as follows.

※ Weekly Mission currently displays "Complete Party Raid 5 times" but this is incorrect and is scheduled to be corrected in the near future. Currently, it does not show that you have played Party Raid more than 5 times. However, you are allowed to participate in Party Raid 15 times, complete the weekly mission and receive rewards.   ["World Raid" has been Changed] > With the new addition of Party Raid, "World Raid" has been changed to "Boss Raid". ▶ Name Change Details

> New 5★ Transcendent Summon Stone, which does not summon new Servants, has been added. > This stone will not summon Ignis and Lucrecia. > The list of Servants that will not be summoned with Transcendent Summon Stone is subject to change in the future, with new Servant updates. > You can purchase this item at the Party Raid Shop, using Party Raid Points.   [Potential – Ranged DPS Special Potential] > Special Potentials for Origin 5★ Ranged DPS Servants have been unlocked.   [New Avatar: Phantom Swordswoman, Simone] 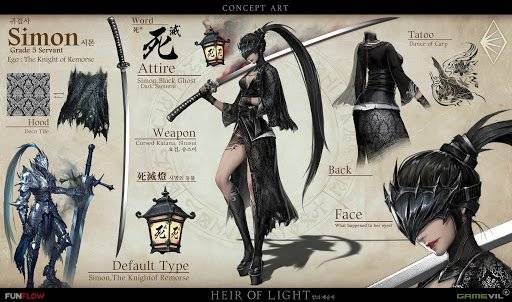 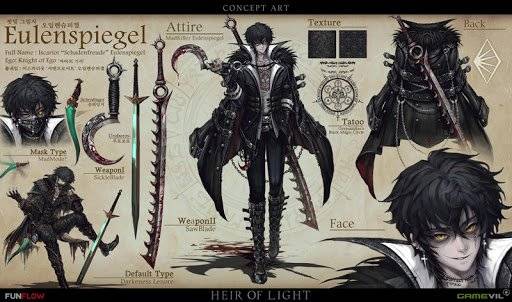 ◆Servant Balance◆ > There has been balance adjustments for some Servants as follows. 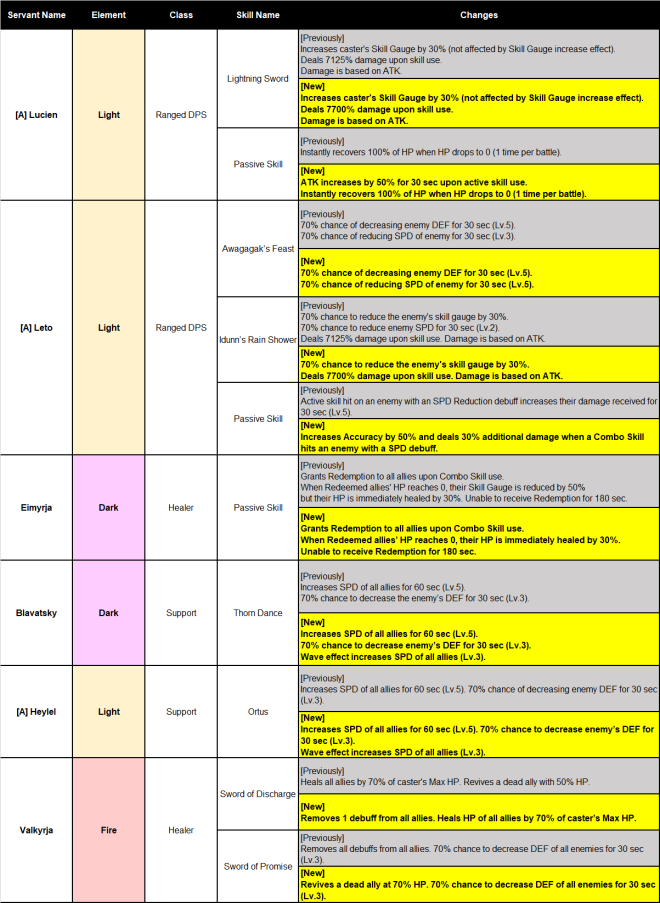 > The quantity of Special Summon Shards from Abaddon Normal Floor Reward has been increased. > Rewards other than Special Summon Shards will be maintained as is. ※ If you clear Abaddon before the update, you will receive additional rewards shown below based on the number of floors you've cleared. Additional rewards will be sent out after the update is completed. There will be an announcement when the reward-sending is completed. 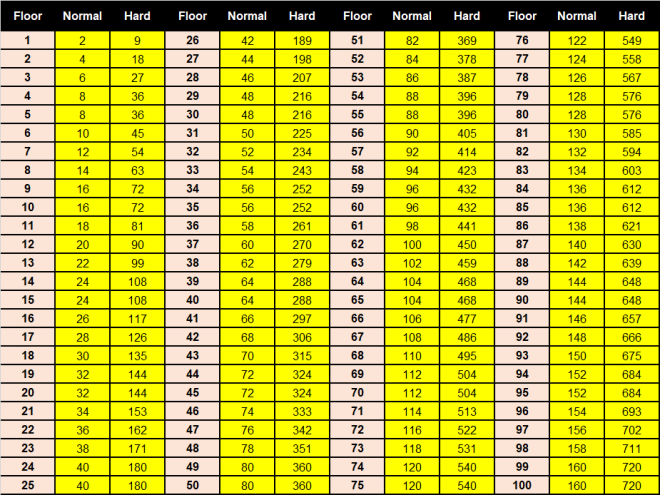 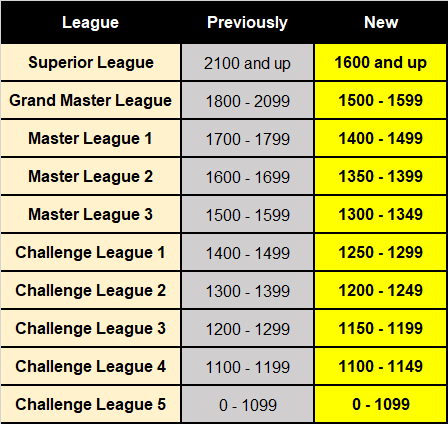 [Secondary Combo Activation Limited] > Servants who were revived by Healer Servants' Reviv skills cannot use Secondary Combo skills.   [Settings for Awakening Dungeon 11 - 12F Changed] > The settings for 11th and 12th floor of Awakening Dungeon has been changed as follows. > You will no be able to fight more than once per day on 11th and 12th floors, after the update.

> You can now manage the types of messages you see on the General Chat Channel. > Select the types of messages you want to see at Settings > Options > Game > General Chat Channel. You can choose types such as Mystery Dungeon discoveries, Equipment Enhance Success, Whispers and Guild Messages.   [UI and Alert Pop-up Messages Improved] ① Battle Prep Screen - Distance between Icons Improved

> The distance between [Back] and [Team Passive] icons has been increased.   ② Quest - Quest Completion Pop-up Alert Adjusted > The text for Quest completion message has been changed as follows.

⑤ Guild Dungeon - Battle Entries pop up > The text that pops up when you want to purchase additional battle entries at Guild Dungeon with Karats has been changed as follows. 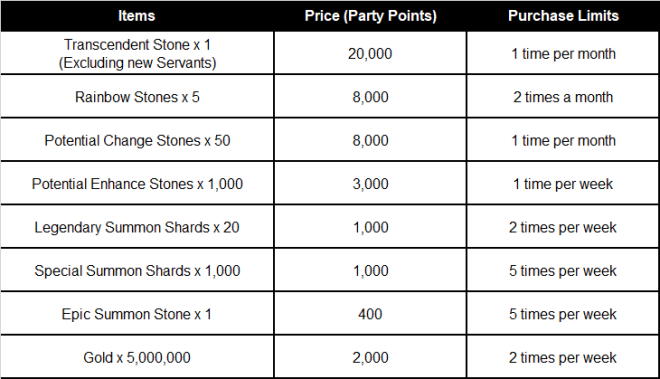 > Party Raid Launch Pack has been added. > You can purchase this pack once during the sale period at Shop > Packs. ▶ Package Details

> Potential Enhance Stone Pack has been added. > You can purchase up to 10 packs per week at Shop > Packs. ▶ Package Details

[Shop Improved] ① Valor Improved > You will now receive 250 Valor regardless of your account level, when you purchase Valor with Karats at Shop > Tickets. ② Purchase Limits Changed > The purchase limits for items sold at the Shop has been changed as follows. > The price remains the same

② Skill Pack > Skill pack has been improved as follows.