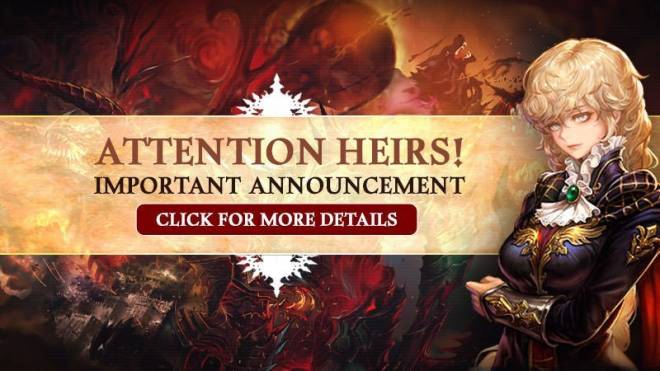 Greetings Heirs,   We would like to notify all users regarding the compensation for the Vortex of Mission Event. There was an issue regarding the mission reward and due to this many users were able to claim rewards multiple times. The issue was discovered on 11/25 and was able to resolve this issue and we have decided to provide extra rewards to all those who have participated in the event. Please see below for more details.   Vortex of Mission Event Compensation: > All users in US / EU server who have participated in the Vortex of Mission Event and only claimed mission completion rewards once.   Compensation Reward: 2000 Karats *Those who have claimed the reward more than once, we will subtract the number of karats based on the value of items and will deliver the remaining karats)   Compensation Reward Date: 11/28 Server time and will process in order.   Notice: > Compensation reward will only be delivered once to your mailbox. > Karat value will be subtracted and will be delivered to those who have claimed the rewards more than once. > Users who have claimed more than once can continue to keep all the rewards as their value will be subtracted from the compensation rewards.   We apologize for the inconvenience that you have experienced due to the Vortex of Mission Event Bug.   Thank you.