Want to make the game fun and easy at the same time? (OP Axe Build)

Hi guys, this is my axe main build I use for pretty much any occasion. And yes, this build is still viable against umbral and fire behemoths even though it is technically weakened to them. Running the Boreal set topped with a Hellplate Casque (transmogged to the Tragic Echo exotic) dyed with Shrowd (exotic) and Twilight. Stalker's Mercy attached with Grim Onslaught and Overcharged Cylinder. Perks used to make this the perfect Berzerker build are as follows: Conduit (for that extra attack speed for yourself and other Slayers) Cunning (for all thos crits and big damage hits) Iceborne (because who doesn't want high defence and healing when you get to 50%) Rage (big damage when you're low health) Ragehunter (big damage when the behemoth is angry at you for hitting it so hard) Wild frenzy (attack speed increase when you get to 50%) All in all this build becomes a monster when you hit that 50% health mark and when you take damage its like you have a Bulwark tonic or Nine Lives active and every time you make an attack, you heal back up to 50%. Team thus with potions such as Bulwark, Frenzy, Stamina and Attack speed and you're good as golden. Towards late game, i now never go down (unless I'm not really paying attention) never need to use my heals, do huge damage and look great while I'm doing it! What more could you ask for ūüėČ #builds #dauntlessbuilds #berzeker 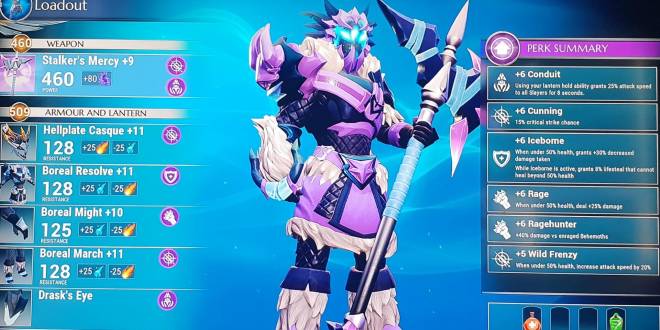