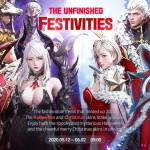 Hundred Soul - [Event Notice] The Unfinished Festivities   Hello Saviors, this is GM Karen, and starting on the 12th of May, the [Unfinished Festivities] events will take place, where players will be able to purchase skins from the previous seasons for the [Halloween Festival] and [Christmas in Herse], along with other various events.   Skins will grant additional stats from the Skin Collection, and increases the chances of [Gold Pouches] throughout the event period.   Please refer to the following for further information.   -------------------------- moot.us