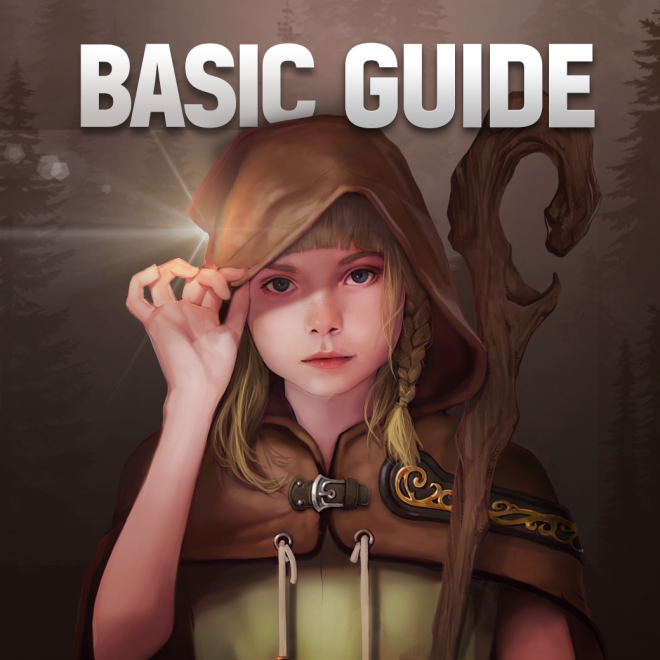 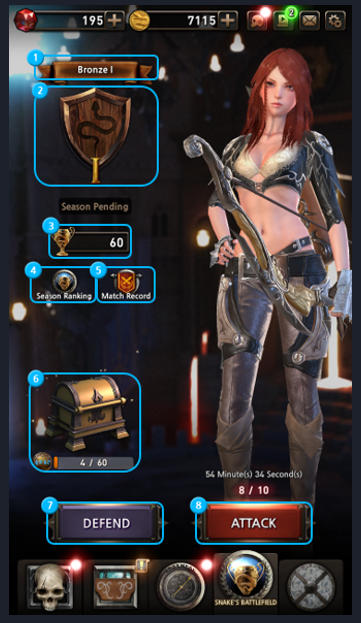 ① League - Your current league in Snake's Battlefield is shown in this section.   ② League Icon - Your current league icon is shown in this section. Touch the icon for detailed league information.   ③ Trophy - You can get trophies when you win the battle in Snake's Battlefield. - Your next league will be determined according to your trophy score.   ④ Season Ranking - You can check the season league rankings that are available for participation during Snake's Battlefield season.   ⑤ Match Record - You can check attack/defense records of each battle. - Tap [Replay] button in each defense record to watch the match video.   ⑥ Dark Medal & Reward Chest - You can get Dark Medal by destroying the opponent's statue during the battle. - Open the reward chest with Medals and earn a variety of rewards. The higher the league you are in, the higher the chance of high-grade box will appear.   ⑦ Defend - You can set your defense party to defend from other summoners' attacks. ※ Check [Snake's Battlefield - defense] part for the details.   ⑧ Attack - Consume 1 attack ticket to attack a summoner. Attack ticket is regenerated one per hour. - Your opponent will be chosen automatically according to your current league. - You can attack a summoner after setting up your defense party by tapping "defense" button. ※ Check [Snake's Battlefield - Attack] part for the details.       2. Snake's Battlefield - Attack   - The attacker must destroy the opponent's "Statue of Battle" within the time limit to win the battle. 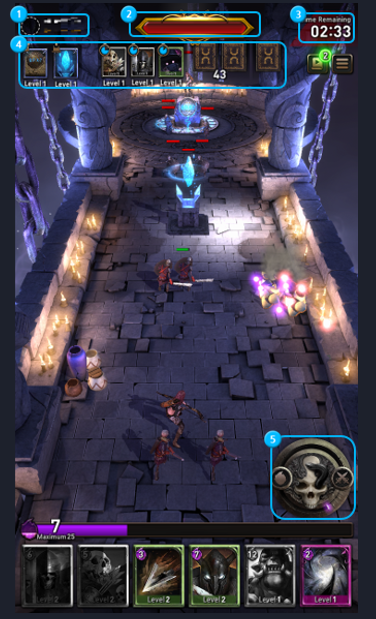 ① Opponent - Opponent's nickname and clan name are shown in this section.   ② Statue of Battle health gauge - You can check the remaining health of the opponent's Statue of Battle.   ③ Time limit - The remaining time of the current battle is shown in this section. The attacker must destroy the Statue of Battle within 2 minutes and 30 seconds.   ④ Defense Cards - You can check opponent's defender summonlings' info and cooldowns. - Opponent's summonlings are summoned every time their cooldown is finished, and more summonlings will spawn as the wave progresses.   ⑤ Fury - The attacker can gather Fury gauge and cast "Fury" skill. - Fury gauge is obtained by hitting the opponent's summonlings or other objects. - If the gauge is charged for more than 1 stage, the "Fury" skill can be triggered, and the effects can be superimposed depending on the level of the stage.

3. Snake's Battlefield - defense   - The defender must protect the Statue of Battle from the attacker within the time limit to win the battle. - The defense battle is performed automatically with the equipment and defense party you have set in advance. 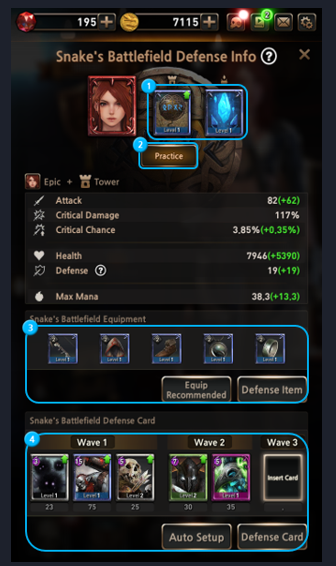 ① Statue of Battle & Guardian Statue - Touch each icon to enhance Statue of Battle and Guardian Statue. - Statue of Battle is the object that the defender must protect. You can enhance your statue by attacking other summoners and win the battle. - When you enhance the Statue of Battle, your hero's health and mana will increase. (Applied only in Snake's Battlefield) - Guardian Statue is a structure located in the center of the battlefield, and it automatically attacks the nearest enemy. - Guardian Statue's damage and HP increases when it is enhanced.   ② Practice - You can go through the simulated battles with your own defense party.   ③ Snake's Battlefield Equipment - This is where you can set the equipment for your defense battle. - Tap [Equip Recommended] to gear up automatically.   ④ Snake's Battlefield Defense Card - This is where you can set the cards for your defense battle. - You can set from Wave 1 to 3, and the total mana cost of cards cannot exceed your hero's mana capacity. - The following are the methods in which defense summonlings are summoned:

* Every summonlings set in the defense party are summoned every time their cooldown is finished.       * The game information guided in this post may change due to future updates.