On the middle-left of the screen, there are two icons. One on the left displays the [God] of your choice upon performing Rebirth. In this case, Netherworld King of Asia is selected.   The icon on the right is glowing with the message, “God Advent fully charged. Click.” It displays [God Advent] gauge.   God Advent gauge is charged as you progress the Stages. When you activate God Advent mode, Todd will be awakened into God and join the battle!   **Tip: Tapping on [AUTO] next to God Advent icon will let Todd automatically activate God Advent mode when the gauge is full.

Gods can also become stronger, like Hero and Knights!   You can open [God Info] window by tapping on [God] icon at the main screen. 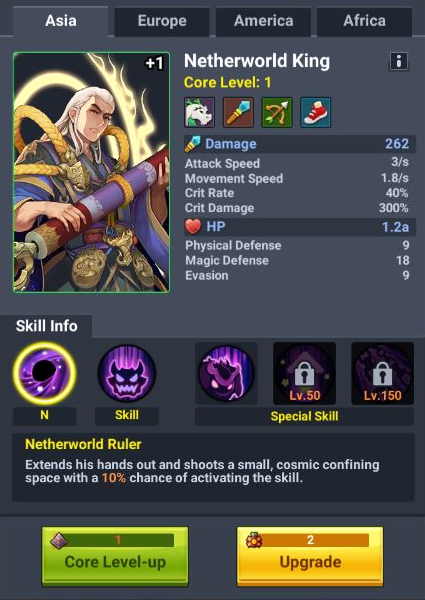 Gods can be stronger in two ways: 1) Core Level-up and 2) Upgrade To increase Gods’ Core Level, you need Cores from Rebirth, and to Upgrade Gods, you need Medals, also from Rebirth.   Medals can also be used to upgrade Knights, so spend them wisely!   When God joins the battle during God Advent mode, God’s stats are determined based on the maximum Gold Level of Knights at the current state of the party. With this, Gods are even stronger than they look in battle!       Hope you enjoy the day with 60 Seconds Hero! Thank you.