Greetings, Warriors! It's almost time for the next update! Here's what we have in store for you. This is a reminder of the 2019-04-24 update.   ■ Inspection schedule: April 24th at 15:00 to 18:00 [KST]   ■ Reorganization of the Battlefield of Victory - The battleground play method of victory and compensation will be reshuffled. - Winning battleground play will give you a chance to get a Buff available on the Battle of Fame. ※ For more information, see Battlefield Help in Game.   ■ Add new characters - Adds a new character Stella. - This will be the case for the Summoning of the Mansion of the Vocabulary. - During the event period, a related heroic sculpture will be added to the New World Dungeon. * The character is not included in the general subpoena and mileage after the end of the fortuneteller's mansion event. * Subsequent Battlefield stores allow you to purchase pieces at all times.     ■ Wonder Shop and Products - Adds a package that includes a five-star hero option. (You can purchase once per account) - There will be a price discount and an increase in the number of purchases for the existing 5-star Hero Confirmation Package. 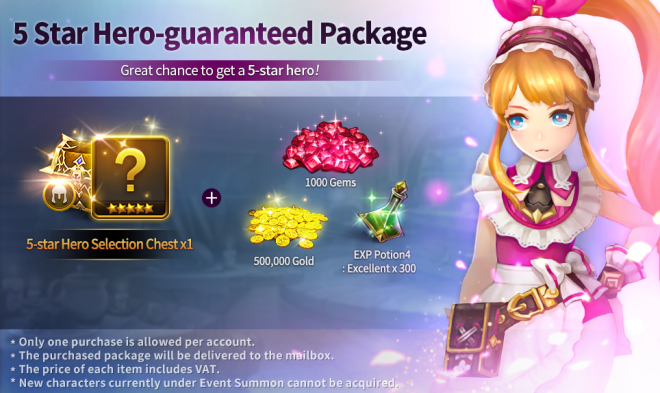 ■ Battlefield of Fame Play Rewards Change - As a result of the Battlefield Rewards of Victory, the Battlefield Play will reduce the Battlefield points that can be acquired. (No change in weekly rating compensation)     ■ Upgrading the maximum level limit for hasty stars - The maximum level limit for 3-6 star heroes will be raised by 5 levels. - This will increase the maximum attainable rating of the hasty star by one level (e.g. change to 5 star maximum rating S2 -> R).     ■ Change the amount of energy reduction in case of failure or abandonment of an adventure - Failure or abandonment of an adventure reduces only half the energy required for that stage.     ■ New users change attendance compensation for seven-day events - Day 7 "Five Star Random Box" will be changed to "Five Star Selection Box". - Applies only to newly created accounts after the check.     ■ Correct other problems - Resume after logout resolves the problem of no access to the game. - A stone shop is added to the shortcut to the Hero Sculpture Acquisition Path. (Add Queen Vish Shortcut)     ※ Notes and Instructions - Inspection times and update contents are subject will can change.   Thank you.