So I tried Titanfall 2

Given how much fun I've been having with Apex, I figured I should check out Titanfall to get a better idea of where the foundations for Apex came from. I didn't play much multiplayer (which I get is the main focal point of the game) because realistically there isn't any game that's gonna tear me away from Apex and get me to devote significant time into. So, I decided to just play the campaign. 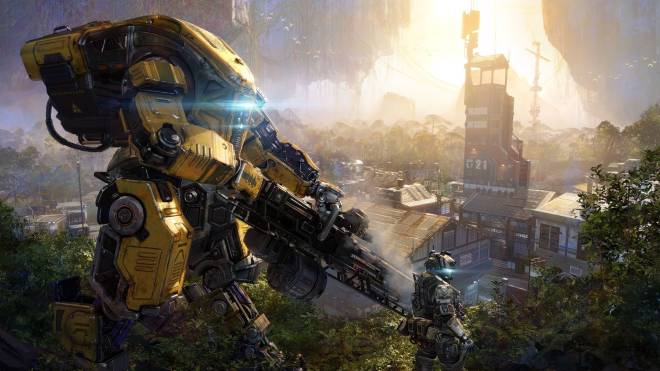 Let me say right off the bat that I can see why people really want wall running and double jumping in Apex Legends. While the movement in Titanfall 2 doesn't feel nearly as smooth as it does in Apex, wall running and double jumping gives you so many options and is such a satisfying way of traversing the vast terrain. Given how enjoyable these mechanics are in Titanfall 2, I can say with a fair degree of confidence that we will likely see them in Apex at some point in the future. It will, of course, be somewhat difficult to balance as there would be a fine line between underpowered and completely broken. It's strange because they both feel like they would fit best as passive abilities but they would likely be too strong. Perhaps double jumping will be the first passive with a cooldown?   As much fun as I had with the Titanfall 2, Apex Legends is a clear improvement. The movement is much, much smoother in Apex. The gunplay is much more precise and satisfying. And, most importantly, the game itself is just simply more fun. That said, I can see why people were eager for a Titanfall 3, but I think that Apex scratches that itch just fine. Unless people just like Titanfall for the mechs, in which case I don't think Apex will ever add titans to the game except for maybe a limited-time game mode.   It was pretty cool first starting the game and noticing all the things that carried over. The sounds when an enemy is downed is exactly the same. Sliding is an effective way of moving around, although it is a bit clunkier in Titanfall. Many of the guns carried over, some with slightly modified names (R-201 in Titanfall, R-301 in Apex). Because of all these things, I think that looking at Titanfall 2 can give us a good idea of what might come in Apex Legends.   Overall I'd say the campaign was pretty fun but nothing spectacular. Of course, I wasn't really going into it for some spectacular story, I just wanted to see where Apex Legends came from. I think that Apex could have a very interesting campaign mode in the future which ties together all the different legends and explains why we're all teaming up and fighting in the first place. I doubt it will ever come, but I would definitely be happy to see it. Imagine if they released a "chapter" of the campaign each season, it would certainly contribute to the longevity of the game and get people excited for the next season. Like I said, I doubt it will ever happen, but who knows? Respawn has been known to surprise and impress.   At any rate, Titanfall 2 was fun but I'm back to playing Apex now. Octane guide coming soon 😉.