#MyApexSquad would probably be Bangalore, Bloodhound and Mirage. This may seem like an unlikely trio but hear me out! For a team to succeed consistently in this game, players have to relentlessly communicate with each other and do a myriad of things like verbally call out enemies, ping, etc because the time to kill is higher than most BR modes. Now if you disrupt the flow of communication of an enemy team then they will be confused, disbanded, and you eliminate the chances of being in any situation 2v1 or 3v1. Well here’s my team’s favorite and most successful tactic. The first step when seeing an enemy is to get as close to them as possible without them noticing. The second step is for our Bangalore to smoke the area where they currently are without them noticing us. Good! Now they’re confused and don’t have a direction to aim their guns at. At the same time, Mirage would bamboozle them and since the visibility is so low, people will think it’s the real deal! This would alert Bangalore and Mirage of the enemy team’s location. Bloodhound would use his Ultimate to assist either teammate if they are engaged in close quarters combat since he is the only person to see the enemy team clearly and help any 1v1s since we have the upper hand and have the element of surprise. “BUT SQUISHY STEVE, wHat If tHeY hAvE a BloODhOunD toO?” 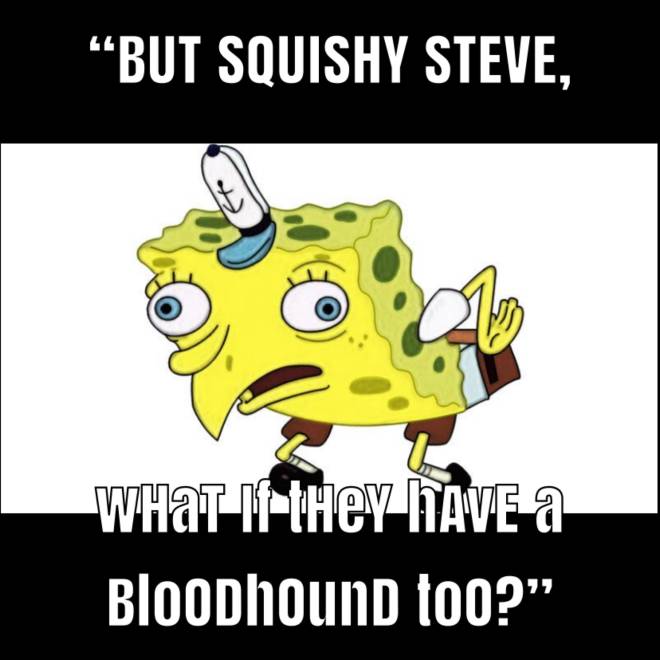 Well that’s why your first target in an enemy team is to kill/down their BloodHound before he has a chance to understand what is going on. BloodHound has to kill his brethren IN THE NAME OF THE ALL FATHER! #bloodhoundmain #MyApexSquad #ApexLegends Some honorable mentions: Lifeline: honestly only useful for loot as if your team is skilled enough in the art of killing then their talents can be useful elsewhere instead of babysitting your team when they get a scratch.You should be getting enough loot and health/armor options naturally by confronting and killing squads. Gibraltar: My big boi and friend Maui from Moana. Unfortunately his hit box detection is huge and can be detrimental in pure fun combat. HOWEVER, his dome shield ability is absolutely helpful from being ambushed against a Bangalore. And he can call in his own air strike! But unfortunately the hit box detection is a deal breaker that can make a difference in close quarters combat. At the end of the day, it’s not which legend is individually better against another legend, what’s more important are the combinations of legends and the strategies your team uses to keep becoming Apex Legend Champions!