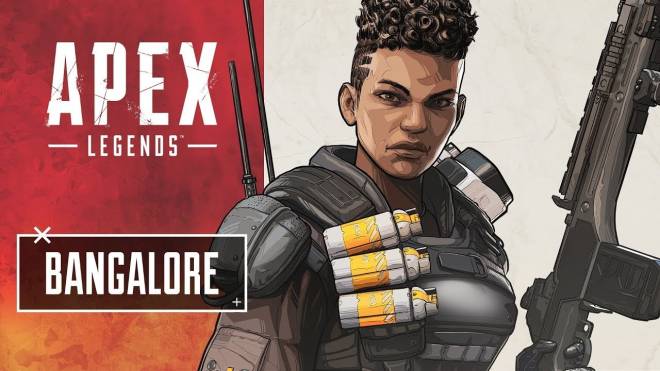 --------------------------Basic Info--------------------------   1.Passive (Double Time): Taking fire while sprinting makes you move faster for a brief time.   Although Bangalore’s passive may not seem like much, it’s quite possibly the best ability in the game. The speed boost it gives you is massive and it makes you great at both getting into fights and getting away from them. It’s worth noting that you don’t actually have to get hit by the bullets - you just have to get shot at. Be aware that in order to receive the speed boost, you have to already be sprinting before you get shot at.   2. Tactical (Smoke Launcher): Fire a high-velocity smoke canister that explodes into a smoke wall on impact.   Bangalore’s tactical ability is a smoke grenade that creates a heavy fog of smoke that is almost impossible to see through. Bangalore’s tactical ability is also very powerful because you get 2 grenade charges, meaning that you almost always have a smoke available.   3. Ultimate (Rolling Thunder): Call in an artillery strike that slowly creeps across the landscape.   You call in an artillery strike that covers a small area. You do this by throwing a grenade, which means you can only use it in an area relatively close to your current position. This makes your ultimate a great tool to engage a fight as it creates a double-threat of both your team engaging and the mortar strike doing damage.   ---------------------Tips for playing Bangalore---------------------   1. Have a plan when you smoke   Your smoke is a very powerful tool when used properly, but can be devastating when misused. The smoke is thick and Bangalore has just as much trouble seeing through it as everyone else (except for Bloodhound who can see through it with his ultimate). This is why it’s important to have a plan and know exactly where you’re going when you use your smoke. You don’t want to use your smoke and end up running into walls.   2. Using smoke to revive teammates   Don’t just smoke and run to them. The smoke lasts a long time so use both your charges and have them crawl to you. Your smoke doesn’t do any good if the enemy knows exactly where you are, so it’s important that both you and your downed teammate relocate before starting the revive.   3. Using your abilities to create a surprise attack   One of the best ways to use your smoke is to begin a coordinated attack with your team. When you smoke on your location, you have the advantage of knowing where the enemy is without them knowing where you are. You can exploit this to reposition and get some nice 3-on-1 situations while the enemy squad has no idea what’s going on.   You can also do this with your ultimate ability. Although the artillery strike isn’t likely to get any kills, it is very loud and dangerous, and usually forces enemies to run away or try to get indoors. You can use this to your advantage because you know where the enemy is likely to go. For example, if there’s only one building nearby, you can mortar strike on the enemy and camp that building because you know they’re going to run in there.   4. Feel free to run away   Bangalore is extremely good at running away from bad situations. Her passive speed boost combined with her tactical smoke makes her incredible at disengaging from losing fights or escaping a surprise attack. She can always rejoin the fight with her smoke and speed boost, so the best way to play Bangalore is often to be constantly engaging and disengaging fights. This ensures that you’re always fighting on your own terms and allows you to have an advantage in almost every skirmish.   #Guide #Bangalore