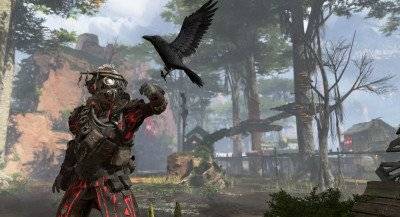 --------------------Basic Info-------------------   1. Passive (Tracker): Foes leave behind clues for you to find   Your passive ability allows you to see the recent actions of enemies. This includes footprints showing where they’ve been and icons showing their recent actions.   2. Tactical (Eye of the Allfather): Briefly reveal enemies, traps, and clues through all structures in front of you.   Your tactical ability scans the area around you and tells you if there are any enemies in your immediate vicinity. If it detects any hostiles, there will be an orange hologram of their last location.   3. Ultimate (Beast of the Hunt): Transform into the ultimate hunter. Enhances your senses, allowing you to see cold tracks and move faster.   Your ultimate is basically like your tactical ability on steroids. It makes all enemies glow red and shows you all their recent actions (where they’ve walked, if they’ve healed, etc). It also lets you move at super speed so you can chase down all your enemies with ease.   -------------------Tips for playing Bloodhound-----------------   1. Use your tactical ability when you land   If there’s other teams dropping in your area, I recommend using your tactical ability right when you enter your first or second building to loot. This will give you an advantage against your enemies and give your squad the information they need to take down the enemy. For the same reason, you should also use your tactical ability any time you approach a suspicious compound.   2. Don’t shoot at the orange hologram   Unlike your ultimate which shows where the enemies currently are, your tactical ability only shows where the enemies used to be. Because the orange hologram isn’t the actual enemy, you want to make sure you don’t shoot at it and give away your position. Instead, use your tactical ability for general information. For example: “there’s 2 guys upstairs and 1 guy downstairs.”   3. Use your ultimate early   After you use your ultimate, there’s a 2 second period where you’re charging up. During this time, you can’t shoot and are completely vulnerable. Your ultimate lasts for 35 seconds which is more than enough time to wipe a squad, so when you know you’re gonna fight just use your ultimate right away before charging in.   4. At least 1 of your guns should be close-range   Bloodhound’s ultimate ability makes him fantastic at sprinting at the enemy and taking them down in close-quarters combat. You’ll want to have a gun that helps you do that. Any SMG or Shotgun that isn’t a pistol should do the trick.   #Guide #Bloodhound