An odd glitch in an Apex Legends match launches a Pathfinder player into the skies above World's Edge, shown in a video.   Pathfinder mains in Apex Legends are certainly used to traveling faster and higher than most of the other playable characters in Respawn's battle royale game, but Reddit user bentrolei seemed to teleport into the air after accessing a survey beacon in a video posted to the game's official subreddit last week.   Jokingly titled "Pathfinder's beacon scan is OP," viewers can see in the video that the player travels from one side of the circle to the other, unintentionally zipping from the Fragment West region of Apex Legends' World's Edge map to Fragment East, and far away from their partner playing as Bangalore. The issue appears to be a physics glitch caused by the interaction between the player, the beacon and the rooftop, though Respawn's awareness of the bug is unclear.   The King's Canyon map recently returned to Apex after briefly being replaced by World's Edge. The battle royale's original map made a permanent comeback during the Old Ways event earlier in April, along with the game's much-requested Duos mode. Developers at Respawn have also made several teases toward a potential crossover with Titanfall, its original first-person shooter franchise, in an upcoming Apex Legends update.   Fans looking for big shakeups in the game still have a wait ahead, as Apex's fifth season was postponed yesterday. Respawn's plans for the upcoming season are unclear, but the studio plans to run a Battle Armor event during the last days of Season 4 that may still keep players on their toes. 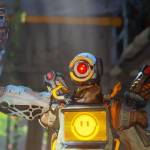