Apex Legends Season 4: Assimilation is almost over, which means it's time to see Respawn add a new character, weapon, and battle pass to its battle royale game.   Apex Legends is about to go into Season 5. If tradition holds, the new season will see the addition of a brand-new playable character, weapon, map changes or new map, and battle pass. Respawn has already revealed that Season 5 will have a "pleasant surprise" for Titanfall fans.   But when can we expect all this new content? The short answer: we don't know for sure. However, we can make an educated guess based on when previous seasons have started.   At the very least, Respawn has already started teasing what's coming in Season 5 with map changes to World's Edge. In mid-April, a datapad appeared in The Dome that has a mysterious connection to Titanfall 2's Effect And Cause level. This week, a second data pad has appeared--this one is in Sorting Factory, as discovered by Reddit user FrozenFroh. The first datapad hinted at secret tunnels beneath Kings Canyon's Singh Labs, while the second implies there may be even more tunnels hidden on the western part of Apex Legends' original map. 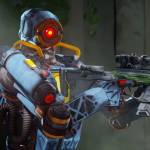