Apex Legends, can it survive?

With Battle Royale games being all the rage right now, EA and Respawn entertainment have now made their mark on the genre. Apex Legends is a new F2P battle royale game that was announced AND released today (February 4th). It takes place in the Titanfall universe, and mixes both the hero shooter genre and the battle royale genre. But can it survive? With Fortnite and other games like H1Z1, Realm Royale and Ring of Elysium still on the rise, can this game really make an impact? It has the potential to. The gameplay looks unique and fresh, something that we haven't seen in Battle Royale games for the past few months. Gun rarity looks semi generic, with the 5 tier system. Movement looks flush and different. An addition of heroes can be both good and bad. It encourages teamplay and coordination, while at the same time introducing balancing. Nerfs and buffs will be crucial at this current stage. If Respawn can't manage it, then the game won't work and will forever be labelled as a flop. My final question to all you Moot users, do you think it can oppose Fortnite? 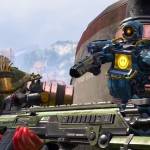