The Best Anime ~ A Review of: Afro Samurai - READ THE WARNING IF NOTHING ELSE

⚠️⚠️⚠️FAIR WARNING! This anime contains graphic imagery, sexual and/or provocative scenes, lots and lots of blood and gore, and I cannot stress this enough. THIS IS NOT FOR THE WEAK HEARTED. ⚠️⚠️⚠️ TL;DR Version: If you want a show, movie and OVA series to watch, this is the first thing that should come to mind. This is more than a classic; it's the criteria for a good anime. This is by far, my favourite anime. PREFACE (AN OPTIONAL READ): So it's January 4th 2007, I'm 10 years old and eager to check out this new anime I kept hearing about within the black community. This isn't modern day where anime is incredibly popular and accepted; you would very much get bullied for talking about anime in public. That being the case, even us black people were bubbling with excitement. Why? It was the first and last anime I've ever seen with a black main character! I'm not aiming to make this about race, but let that sink in. In my 25 years on this planet, I've seen this once, ever. 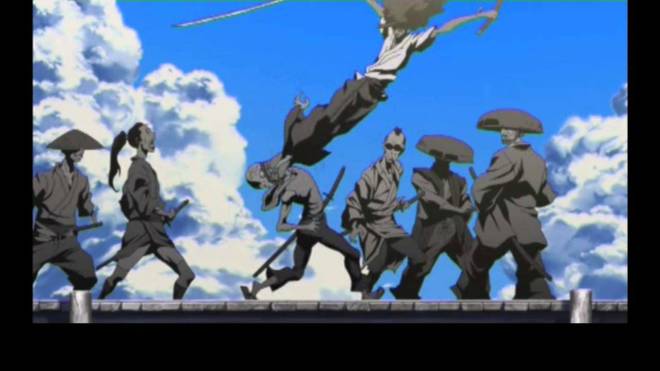 SUMMARY BEGINS HERE: In an undisclosed location in Japan, there's a legend told of the strongest Samurai. The tale begins with the two fabled headbands – the #1 & #2 headbands. (S)He who holds the #1 headband can find some comfort in the fact that none may challenge them, unless the challenger dons the #2 headband. The wearer of the #1 headband is exactly that — the #1 Samurai, an unstoppable force to be reckoned with. The #2 however... Well, they're usually far less fearsome. The #2 Samurai doesn't have the right to deny a challenge and so the title of second best often changes. When he was just a child, Afro looked up to his father, the #1 Samurai, that is until his Dad was challenged by the #2 Samurai where a young Afro would watch as his only parent left was BRUTALLY killed and beheaded in front of him. Swearing to seek vengeance on his father's killer, Afro claims the #2 headband and leaves to become the best Samurai this world had ever seen.

The trauma of watching his father die, as well as the life Afro had to live in solitude caused him to develop something like an alterego or split repressed personality. Afro would be the Yin (darkness) and his inner persona would be the Yang (light). Ironically, Afro is better represented by Yang, which symbolizes the sun, light, masculinity, activity and the heavens, while his inner self is better represented by Yin, which symbolizes the moon, darkness femininity, passivity and the Earth. Afro and his inner voice are two incomplete halves of each other, and that's one of the main concepts of Taoism. Afro is quiet, bold and quick to take acrion; Afro's other half is loud, talkative and cowardly.

How does Afro fare on his travels? Will he avenge his father before it's too late? Will he be alone forever? Will his heart ever mend? There's only one way to find out.