● BREAKING: Elon Musk, the outspoken entrepreneur behind Tesla and SpaceX, is now the richest person on the planet.⠀ ⠀ ● A 4.8% rally in the electric carmaker’s share price Thursday boosted Musk past Amazon.com Inc. founder Jeff Bezos on the Bloomberg Billionaires Index, a ranking of the world’s 500 wealthiest people.⠀ ⠀ ● The South Africa-born engineer’s net worth was $188.5 billion at 10:15 a.m. in New York, $1.5 billion more than Bezos, who has held the top spot since October 2017. As chief executive officer of Space Exploration Technologies Corp., or SpaceX, Musk is also a rival to Bezos, owner of Blue Origin LLC, in the private space race.⠀ ⠀ ● The milestone caps an extraordinary 12 months for Musk. Over the past year his net worth soared by more than $150 billion in possibly the fastest bout of wealth creation in history. Fueling his rise was an unprecedented rally in Tesla’s share price, which surged 743% last year on the back of consistent profits, inclusion in the S&P 500 Index and enthusiasm from Wall Street and retail investors alike. Credit: https://www.bloomberg.com/news/articles/2021-01-06/musk-close-to-surpassing-bezos-as-world-s-richest-person?utm_medium=social&utm_source=twitter&cmpid=socialflow-twitter-businessweek&utm_campaign=socialflow-organic&utm_content=businessweek&sref=xuVirdpv Let me know your thoughts 💭 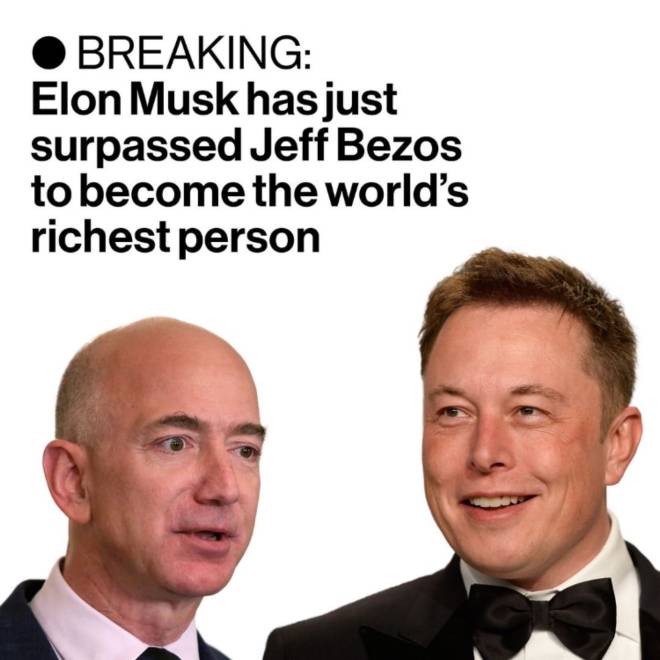