AC Valhalla Melee Weapon types and how to use them 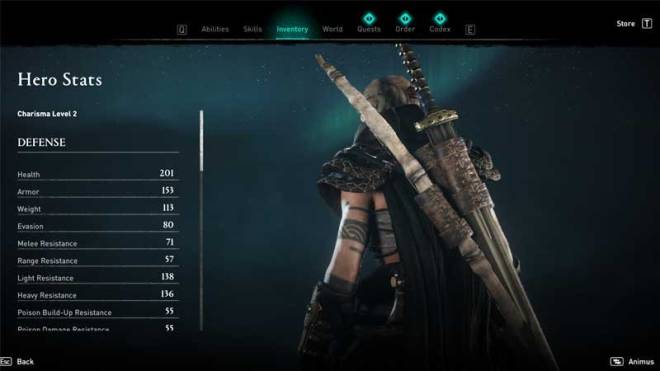 Despite the deluge of weapons that constantly appeared in AC: Odyssey, Valhalla opted to go for a more measured approach on how many weapon types we’d have access to as well as how easy it would be to find them. Early on you can be stuck with only a couple of weapon types, but once you gather all the kinds together, it’s quite the variety to choose from. Let’s explore what we’ve got.   One handed Axe 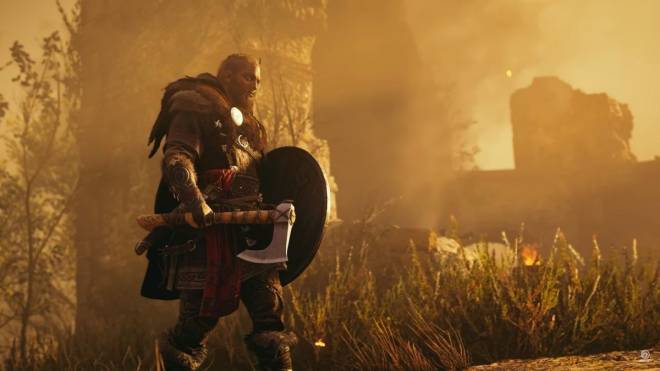 These are pretty much your cookie-cutter weapons in this game and the fact you’re given them at the very start is evidence of that. This doesn’t mean they’re bad though and when upgraded and equipped with the proper damage upgrade runes, you can deal out some serious punishment with these. Your options are to either dual-wield them or use a shield. While dual-wielding is fun, you’re going to be left extremely vulnerable and the secondary attack isn’t that great for the ax and honestly looks completely ridiculous, so I tend to lean towards the shield method here. The one-handed attacks are pretty slow and hard usually give the enemy too much time to retaliate, so I’d recommend getting used to heavy attacks and blocking and parrying frequently to get the most use out of the starting weapons. The heavy attack deals some serious impact and has a habit of breaking an enemy’s guard and dealing some great poise damage as well which will generally set you up for an easy stun kill.   One-handed Hammer 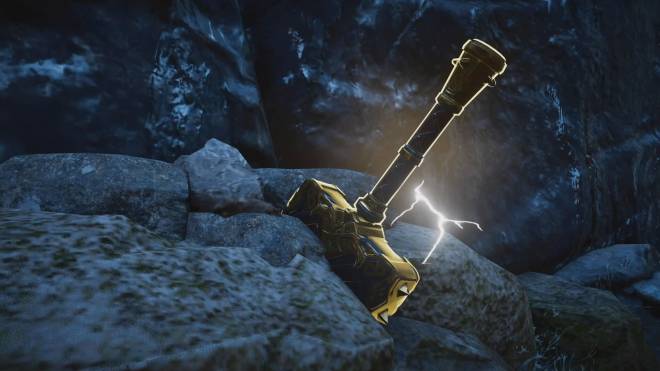 The hammers are probably my favorite weapon to use when it comes to the single-handed variety here. The impact each hit has feels great and the haptic feedback adds to that effect considerably. The thump of the steel smacking off enemy heads is both sickening and satisfying to use and someone makes you feel more savage than dual-wielding axes would. Damage wise, they are slightly higher than the axes from what I’ve collected and the upgrades push them into being as effective as some of the two-handed weapons. The secondary attack is pretty much the same as the axe, but the attacks fly off much quicker than the ax and the strong attack is devastating after a parry or breaking your opponent's poise. The benefit to the hammer is the Blacksmith’s hammer comes with an amazing ability to knock enemies to the ground after every critical heavy attack, which can lead to some very short fights. I’ve only been able to find two variations of the hammer, though there might be one extra special hammer of Norse mythology lying around here somewhere….hint hint.   Iron Flail 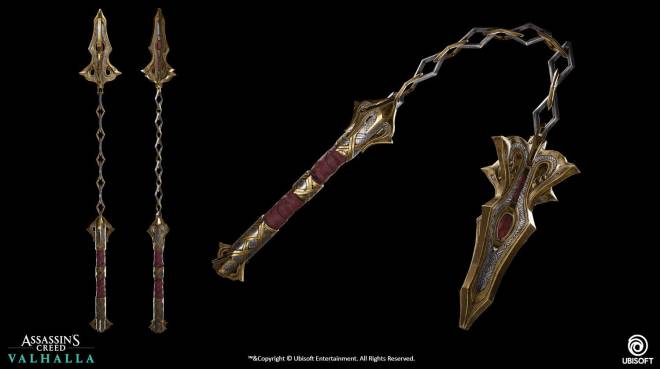 A very unique weapon that takes a bit getting used to, the Iron Flail needs to be revved up a little before it can hit for good damage, that means your first few strikes with it barely make a scratch, but as momentum builds you definitely get your money’s worth with the whirling dervish of death you become. Spinning Death is the flail to find here though as it has a chance to drop a firebomb with any heavy finisher. The defensive capabilities are pretty janky with this weapon though, so if your strategy is to parry a lot I would look elsewhere.   Daggers

Although I’m usually a sucker for any two-handed weapon I can find in a game, in Valhalla the daggers are just so damn powerful it’s tough to ignore them. Taking the place of the sword (for whatever reason) are the daggers in Valhalla and they deal some serious pain out in a lightning-quick amount of time. The speed of the daggers vary from type to type, but the overall feel of them is just incredibly versatile. Whether you’re dual-wielding them or mixing and matching, it’s always good to have a thoroughly upgraded dagger when the fights get tough. The basic attack is a series of slashes with the heavy attack being the one that will likely put your foes in the ground. If you’re dual-wielding, the secondary attack will unleash some super quick stabs that you can usually follow up with a heavy attack for quick finishing combo. The damage is low, but if you focus on the proper path in the skills tree, you can buff the daggers very quickly.   Two-handed Greatsword 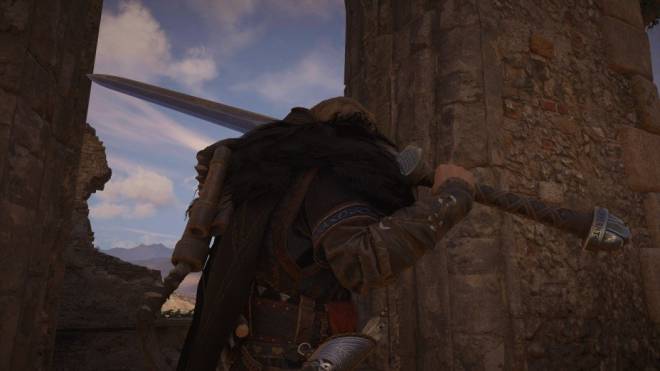 I want to love the greatsword as it’s usually my favorite weapon in any RPG, but in Valhalla, it’s a mixed bag. It’s a bit faster than the two-handed axe, but it feels like it takes ages to down an enemy and that’s not the effect I want out of a sword that looks like The Mountain would have trouble wielding. The light attacks are numerous, which gives it a good ability to wear down an enemy’s poise bar, but the heavy attack is just far too slow to either feel good to use or be effective in combat. The secondary attack has you charge with the sword pointed forward which looks cool, but lacks any sort of impact on enemies and just looks off while also not being too useful to use. There are also only two variations of greatswords in this game. Two. In a 60+ hour game. Good call there.   Two-handed Axes 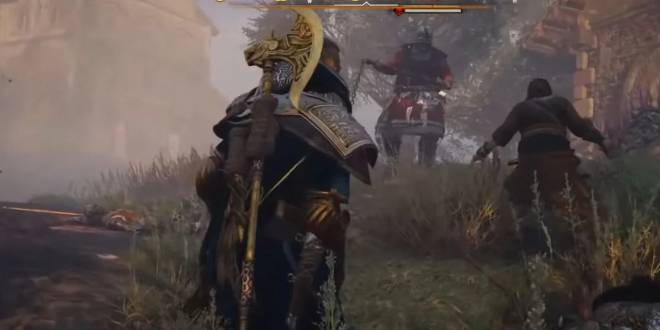 As the cream of the crop, the two-handed ax is both the most thematically satisfying and most powerful weapon to use in the game. There are a handful to find with each one looking distinct from the other providing some crazy powerful buffs. The swings are slower than the greatsword, but that doesn’t matter when they’re incredibly strong and will eviscerate your enemies poise bar if they decide to block you. The haptic feedback on each hit is amazing and the finishers and just so brutal that they never get old. The heavy attack is just a series of brutal swings that just demolishes anything in its path and the secondary attack has you spinning around with the ax, chopping up any enemy in your path. If you need power in a fight, the ax has you covered and things get even more fun when you unlock the heavy dual-wielding option.   Spears 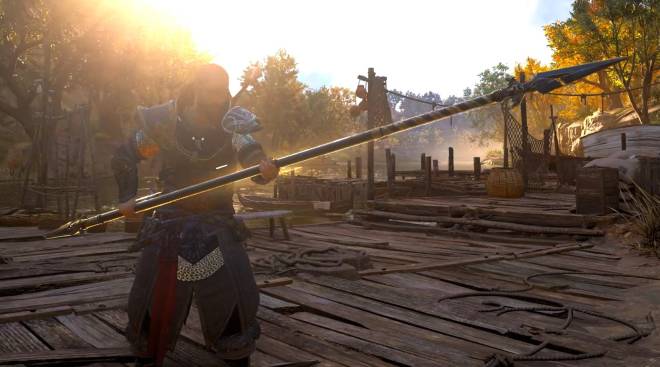 Pretty straightforward, but very effective to use. When you come upon those enemies who just love to get in close and stab you, the spear is there to tell them to back the hell off. This is more of a defensive weapon than an offensive one, but it’s great fun to use when you want a change of pace. The light attacks do mediocre damage, but when you use the secondary attack to impale and fling enemies around the battlefield, you’ll understand the worth of the weapon. The damage never gets too high with the spear though and that’s going to be an issue for tough enemies and anyone playing on the hardest difficulty which is a bummer. You can expect to find three of these throughout your journey, though even the strongest one has a pretty low attack value.   So, what are your favorite weapons to use? Do you stick to one or do you switch it up? Let's talk about it below!