News: Belle delphine, is back on youtube after Mistaken Ban?

Soon after belle delphines youtube account was Randomly Terminated out of the Blue, People went on Twitter about how it wasn't fair that she received No warnings, No strikes, and then all of a sudden get Banned from the platform? It was because it violated youtube polices, Like nudity/Sexual content. First comes from @WillyMacShow on Twitter, "Belle Delphine is now banned for her music videos. No strikes. No warnings. Awesome YouTube. Apparently you can only have sexualized music videos if you’re part of the music industry. Fuck this website #SimpForBella cause she simped for us." And another from, DDsulzbach "Belle Delphine getting banned on youtube is seriously messed up. Nobody should support that shit. The double standard of Youtube when the videos they've had on their FRONT page is on equal if not worse than Belle's music videos makes zero sense to me." Basically She got banned with No strikes and for a channel to be taken down they must Have 3 ACTIVE strikes which she didn't. Some people are happy because they called Her a "thot, and Some people argue that she is Inappropriate to be on the platform, Yes she might do some of a bit sexual Shenanigans but her Getting banned was Wrong. In the end she got her Account back up and Belle delphine tweeted, 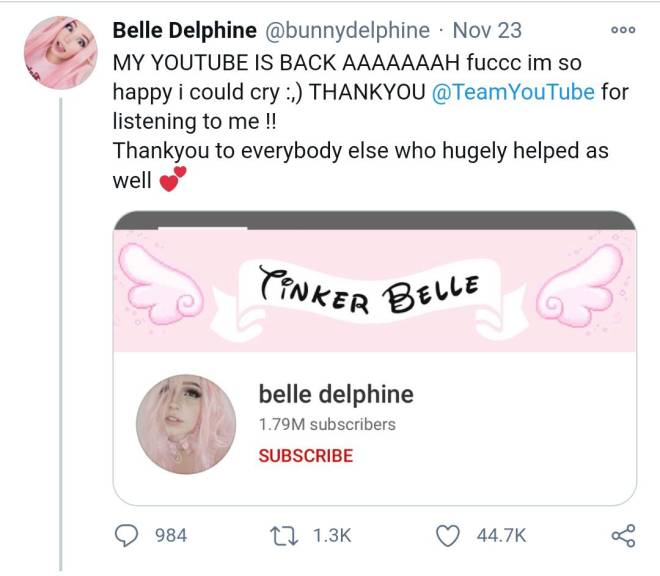 So she did Get her account back, She seems to be happy and supportive of those who pinched in to help, I hate to say it but im Happy for her. What do you all think? Does belle delphine Need to be kicked off of youtube forever? Or is she In the place to stay? 👇Let me know what you think Over this whole mess 👇 And if you want More Post like this then let me know!