🔸Elon Musk’s year of dizzying ascents hit a new apex Monday as the Tesla Inc. co-founder passed Bill Gates to become the world’s second-richest person.⠀ ⠀ 🔹The 49-year-old entrepreneur’s net worth soared $7.2 billion to $127.9 billion, driven by yet another surge in Tesla’s share price. Musk has added $100.3 billion to his net worth this year, the most of anyone on the Bloomberg Billionaires Index, a ranking of the world’s 500 richest people. In January he ranked 35th.⠀ ⠀ 🔸His advance up the wealth ranks has been driven largely by Tesla, whose market value is approaching $500 billion. About three-quarters of his net worth is comprised of Tesla shares, which are valued more than four times as much as his stake in Space Exploration Technologies Corp., or SpaceX.⠀ ⠀ 🔹Musk’s milestone marks only the second time in the index’s eight-year history that Microsoft Corp. co-founder Gates has ranked lower than number two. He held the top spot for years before being bumped by Amazon.com Inc. founder Jeff Bezos in 2017. Gates’s net worth of $127.7 billion would be much higher had he not donated so prodigiously to charity over the years. He has given more than $27 billion to his namesake foundation since 2006.⠀ 🟡Credit: BusinessEmpire🟡 Let me know your thoughts 💭 Side note:F Bill Gates 💯 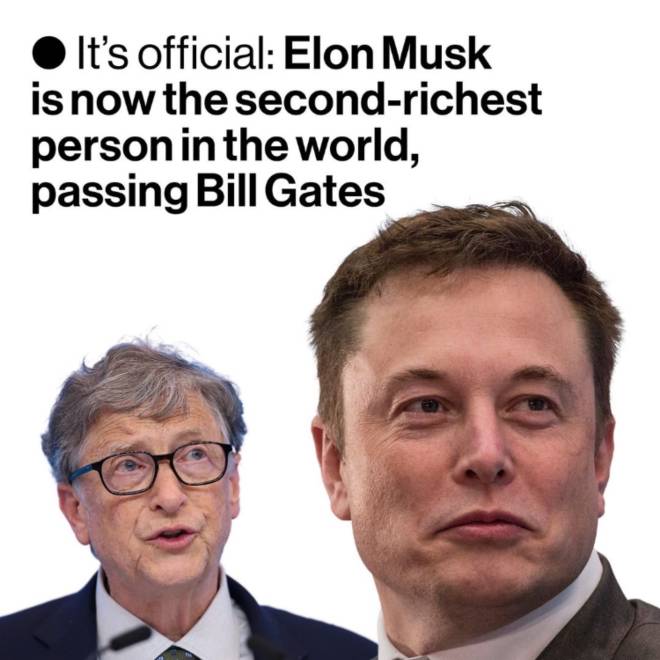