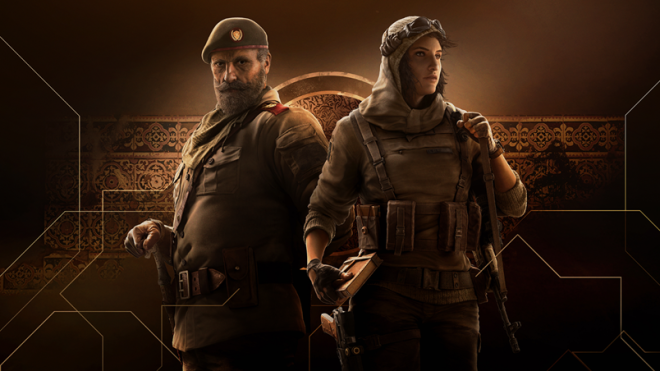 The Groupe d'Intervention de La Gendarmerie Royale (GIGR) is a regiment within the Royal Moroccan Gendarmerie. The Moroccan Royal Gendarmerie was founded in 1957 by the late King Mohammed V. The structure of its functions has been determined by the two major different but complementary traditions. One of them has its roots in the history and culture of Morocco. The gendarmerie was born of Moroccan administrative and political system which has ensured public security and maintenance of public order for centuries. The second tradition (Makhzen) is much newer. Like other members of the FIEP organization, the legislation which founded the Royal Moroccan Gendarmerie describes it as a public force designed to guarantee public security and public order and the implementation of laws. This legislation text attaches the Gendarmerie to the Royal Moroccan Army, then constituting a military force in its structure, administration and command forms. It consists of officers and NCOs. It is an available organization introduced in the Operation Wind Bastion of Tom Clancy's Rainbow Six Siege. 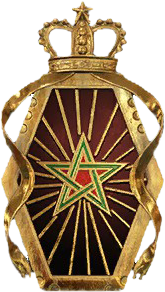 The color of the symbol is Tan which is slightly darker than SEAL. The concept is tan tiger stripe baton pants. The overall concept is to use remote ranged equipment with both remote and small range support, Nomad can support friendly forces by dropping enemies within range with a barrage of guns, and Kaid uses a special ability to install high-voltage generators to power current-carrying steel gadgets within range.     Attacker : Nomad Defender : Kaid 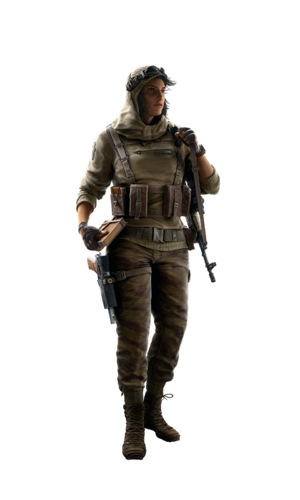 NOMAD (Sanaa El Maktoub) “On the highest peak I found the wind. Now, I let it clear my path.” 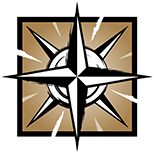 Background Brought up in a wealthy Moroccan family, Sanaa El Maktoub travelled considerably at a young age, visiting Europe and North Africa, and dreaming about braving remote regions. She enlisted in the military at 19 and later joined the Groupe d'Intérvention de La Gendarmerie Royale (GIGR) after graduating from the legendary Fortress. She served 4 tours with the Mountain Infantry Battalion and took part in Flintlock exercises and joint missions with Trans-Saharan Counterterrorism Initiative partners. She became her unit’s expert on environmental operations. Between tours, she undertakes solo expeditions. El Maktoub is among the few explorers who can cross the Sahara, climb up the Alps, trek through Asia’s rainforests, march along the Arctic Circle… and still return to her unit in operational shape. Rain or shine, desert or polar climates, she can walk through it all. Perceptive and resourceful, she’s an expert survivalist who sketches out her trips in her notebook. 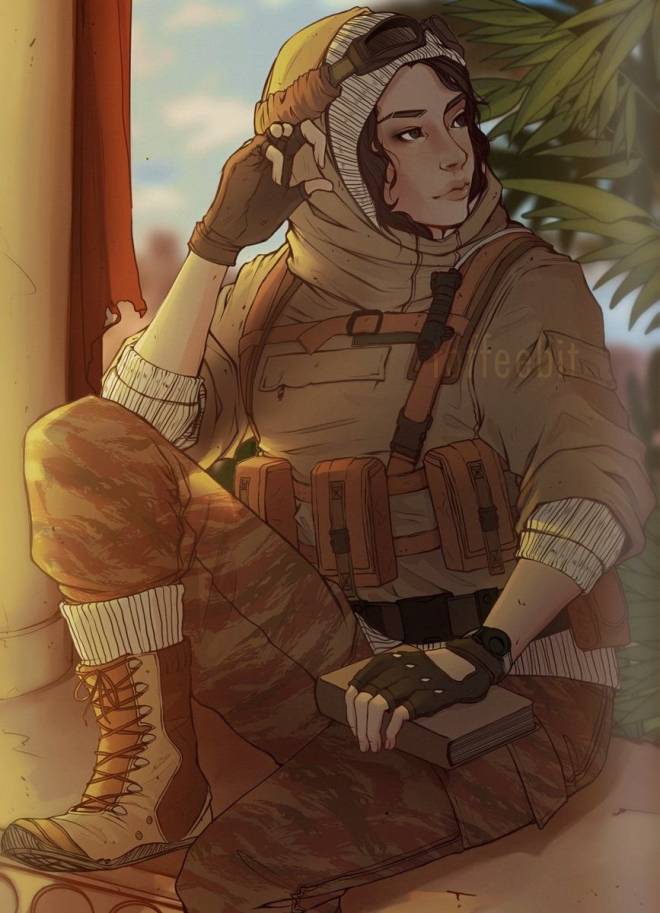 Psychological Report Specialist Sanaa El Maktoub is constantly on the move, thus her codename, "Nomad." The only time she stands still is when she's sketching in her notebook, and following the recovery of her fingers no less. I think her privileged upbringing instilled her with a private need to succeed, pushing her to conquer mountains and terrains her parents never faced. She likely got accused of being soft in her childhood, and she’s set out ever since to disprove it. In her it's created a world-class extreme environment expert whose reputation precedes her. Specialist El Maktoub possesses unmatched resilience to survive the elements, and her endurance is famous within military circles. In fact, the first time I encountered Specialist El Maktoub’s name was through a research paper about military fitness assessments. I can see why she’s invaluable to GIGR. She claims that anyone can develop her survivalist and planning skills with experience, but she's being genuinely modest. Bragging seems antithetical to her and I think that it somehow diminishes her own sense of accomplishment when she has to talk about it. She certainly doesn't do things the easy way… her drawings are her photographs. Truth be told, I’m envious of her spirit. First deployed to the Fortress at the start of her military career, she did extensive training under the leadership of Specialist Jalal El Fassi. It would be interesting to see them working together again under different circumstances.   During her expeditions, she encountered a number of secluded cultures, like the Maasai in Kenya and the Nenets of Siberia. It’s resulted in self-taught skills in cultural diplomacy. While Rainbow Six recruits specialists from around the world, I'd guess no one else has seen as much of the world on their own as she has. And still, she wants to become the first woman to cross Antarctica, alone on foot. I have no doubt she can accomplish that, but I hope it doesn’t cost her more appendages. I privately worry that she considers such injuries a badge of honor and proof that she isn’t some spoiled rich girl. 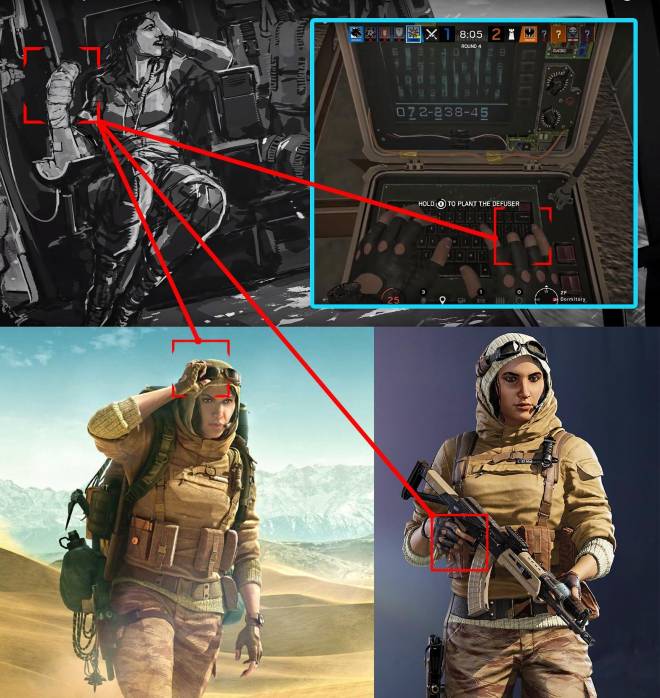 Nomad's last name, El Maktoub (Arabic: مكتوب) translates to "note, letter" in Arabic, a reference to her habit of taking notes.The word also translates to "destiny". Nomad's right-hand model lacks the middle and ring fingers. The loss of these fingers were referenced in her Bio's Psychological Report section and her interactive journal, where they were frostbitten during an expedition and had to be cut off. Although Nomad's journal depicts her as writing with her left hand, she wrote with her right hand during the Operation Wind Bastion menu screen. This implies she is ambidextrous and can write with both hands.The pushback effect of the Airjab grenades is recycled from the Smashers' knockback attack in Outbreak. 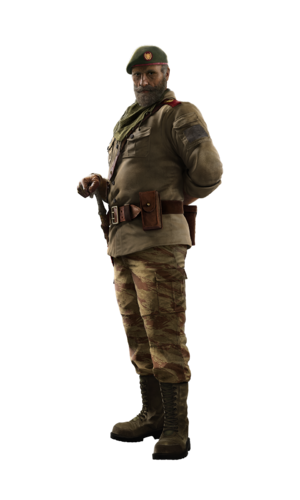 KAID (Jalal El Fassi) “Come, Break your back against the mountain.” 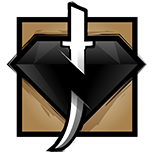 Background Jalal El Fassi was raised on stories of the Fortress, the legendary training facility in the Atlas Mountains. Its incomparable reputation, along with its famed "Kaids" (Commander) were seared into El Fassi.   He joined the GIGR (Royal Moroccan Gendarmerie) at 18, demonstrating natural leadership skills under fire. His ability to effectively command specialized squadrons in joint Trans-Saharan Counterterrorism Initiative (TSCTP) operations led to his promotion as Captain. After years of service, the Fortress' reigning Commander chose his successor: El Fassi, whose authoritative but ethical style made him a worthy "Kaid". His imposing presence and strict values led to success with his graduates, and the Fortress quickly gained accolades. He further proved its excellence through the thousands of soldiers who trained or taught on its grounds. Over years of negotiating, he welcomed troops from across Africa and the Middle-East, fostering stronger ties between TSCTP members and African Standby Force countries. 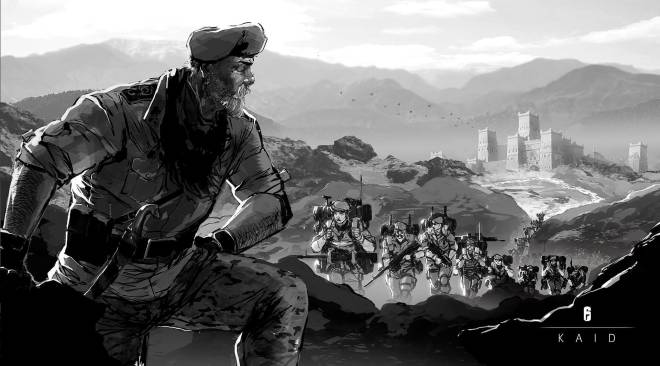 Psychological Report Specialist Jalal "Kaid" El Fassi is an imposing Operator. His appearance alone inspires respect – it's easy to see why his stature and demeanor strike fear in his students. Or how his body language warrants their respect and cooperation without him having to say a word. Frankly, it's both daunting and fascinating at the same time. Specialist El Fassi descends from a long line of Commanders and their Fortress. The Fortress was in disrepute for quite some time, however – some business involving bribes from wealthy families – before El Fassi was at the helm. And it seems his administration not only eliminated these sordid dealings, but elevated the Fortress to heights unimagined by any of his predecessors. It's been difficult separating Specialist El Fassi from his role. He's sacrificed a personal life for the success of his Fortress, and his role makes it difficult to create interpersonal relationships. I suspect he prefers being alone—he certainly isn't the type to open up and share, but I think I understand why. He's taken it upon himself to guide and nurture the future of Moroccan Special Forces, and potentially all of North Africa. He is the rock that all others look up to, so Specialist El Fassi shoulders the brunt of that weight with equanimity because he believes nobody else can. 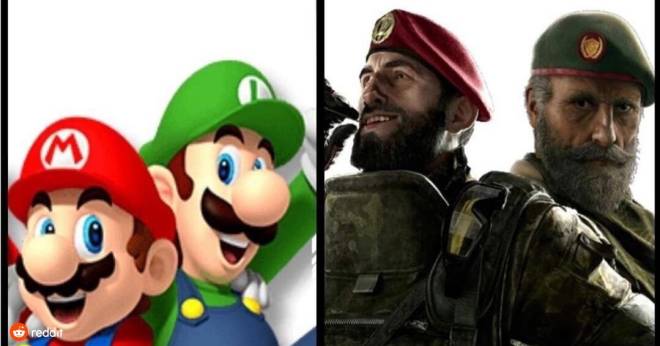 Specialist El Fassi is particularly phlegmatic, and his dedication to his duty as Commander and to the Fortress is resolute. Rainbow spent years trying to persuade him to join, but he is not easily moved. The Fortress and its legacy were instilled in him as a child. It is his home, his castle, and I can see the time he spends there in solitude is invaluable. But we finally managed to cut a deal with him, one that not even the great Kaid could turn down… one to improve his school and propel it into international standing. This will be the first time El Fassi is among equals. Only time will tell how he reacts to not being in a position of authority. A Heavy Armored Operator, Kaid is equipped with two throwable "Rtila" Electroclaws that can be thrown onto any surface it can attach to, electrifying metal objects within a certain radius of the gadget. 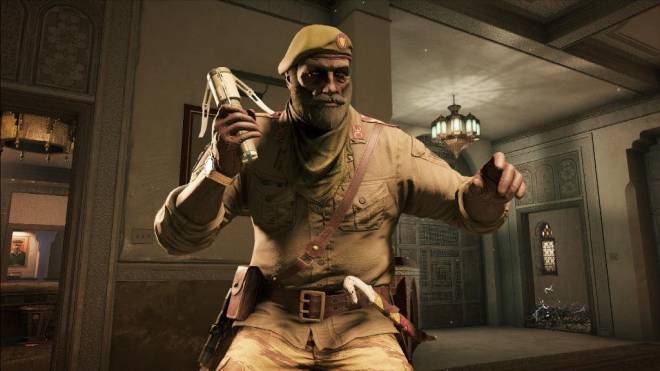 "Rtila" (رتيلا) in Moroccan Arabic means "Spider." "Kaid" (قائد) in Arabic means "Leader" or "commander." Kaid is the oldest Operator, succeeding the previous oldest Operator, Mike "Thatcher" Baker. Kaid is 58, whereas Thatcher is 56.     I hope you have fun reading it. If you have any errors or wrong parts, I would appreciate it. #LOBClancy #OperatorsStory #Operators