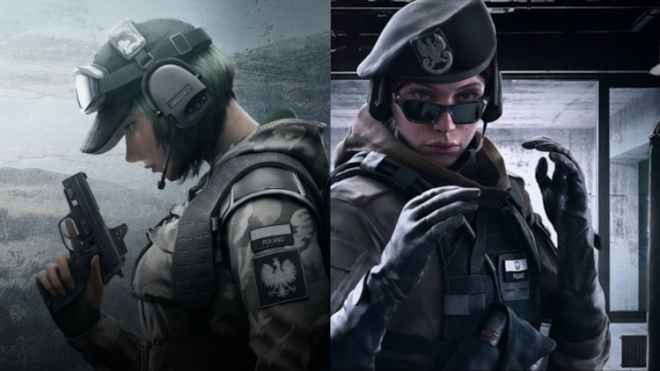 JW GROM (Full Name: Jednostka Wojskowa GROM im. Cichociemnych Spadochroniarzy Armii Krajowej; English: "Military Unit GROM named in honour of the Silent Unseen of the Home Army") is Poland's elite counter-terrorism unit. GROM, which stands for Grupa Reagowania Operacyjno-Manewrowego (English: Group (for) Operational Maneuvering Response), which also means "thunder", is one of the five special operation forces units of the Polish Armed Forces. It was officially activated on July 13, 1990. It is deployed in a variety of special operations and unconventional warfare roles, including anti-terrorist operations and projection of force behind enemy lines. 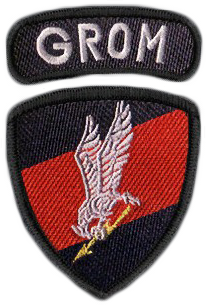 Attacker : Zofia Defender : Ela     The emblem color is slightly brighter than JTF-2. As part of his father's uniform, commander and senior officer of GROM, Zofia is on the left and Ella on the right. 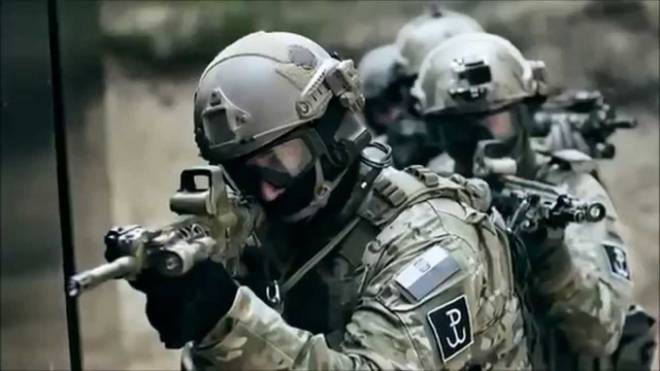 There are many unusual points compared to other units. They are sisters, composed entirely of female members, who use their real name as their code name, and can take special actions in a wounded state. In addition, there is a special note that the concussion effect of each other is 50% shorter in duration. If one person kills one side, an additional 10 points are awarded as "competition between sisters". Even if you look at each other 's interaction script, sister fight is reminiscent.   The whole concept uses a concussion device to neutralize and slow down the enemy with neutralization. 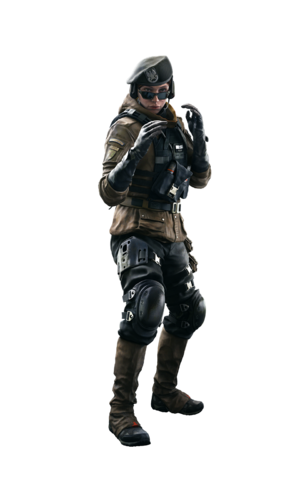 Zofia (Zofia Bosak) “No risk, no reward”   Born in Wroclaw, Zofia Bosak is the oldest daughter of Jan Bosak, former commander of the Polish Special Forces Unit GROM. While attending her father's military high school, she was pressured to perform on every level – a burden her younger sister was not able to cope with.   During a school trip to the Masurian Lake District, Zofia was prey to a disturbing prank that almost cost her life. While she played in the lake, three boys from her class took turns trying to drown her, just for 'fun'. This violent experience marked her with a deep mistrust of others. The following week, she has to sit beside her assailants in class. To deal with her growing anxiety, she decided to push her training further, and ensure she could rely on her skills for protection. Her father agreed to show her more ruthless techniques, given she would never question his methods. 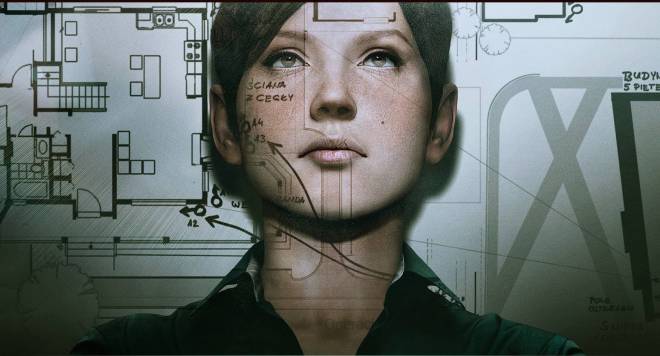 When Zofia hit legal age, she enlisted in the army. Among Zofia's most notable exploits is a rescue Operation in Guatemala, codenamed Red Agatha. A disastrous tropical storm formed a sinkhole in the middle of the city, swallowing an entire neighbourhood. Zofia was deployed to protect a team of scientists examining the perimeter. During a sudden landfall, she saved a child from disappearing into the abyss. To reward her ability to withstand hardships, Zofia received a medal and was promoted to Second Lieutenant.   Throughout her experiences, Zofia forged a second family overseas. to have more impact on the field, she learned to trust her squad mates with her life, reconsidering the cruel lesson from the incident at Lakeland. Far away from her father's brutal training, Zofia let down her walls, developing close ties for the first time. She met her now-husband during a rogue operation in Mali, where they both mistook each other for hostiles.   Challenged by her squad mates on the field, she discovered the true kind of specialist she wanted to become. At the peak of her career, she flew back to Poland for her wedding ceremony. The celebration was kept short, but Zofia quickly returned to Wroclaw for her maternity leave. Her arrival in Poland was soon followed by her father's sudden passing. The birth of her daughter had a profound effect on Zofia, igniting her need to cocoon with her family – but Ela ignored her sister's attempts to reconcile.   Zofia returned to the GROM soon after hearing Ela would pass the selection. Except for her attempts to reconnect with her sister, Zofia kept her distance with everyone else. Her squadron noticed this change and wondered if her recent obsession with her father's pocket watch was a remnant of grief, or something more.   When Ela accepted the prestigious offer to join Team Rainbow, Zofia saw no reason to stay behind. Everything about the GROM now seemed to remind her of her father. Three months later, Zofia became an official member of Team Rainbow.   Psychological Profile Underwent thorough examination, but remains inconclusive. Perhaps too experienced at falsifying test results. Significant divide between the two sisters. Their father had a key role in it. His obvious favoritism towards Zofia is well-known. When asked about their relationship growing up, Zofia kept her answers curt and non-committal. And yet, very protective of Ela. Refuses to discuss her father's suicide. =======================================

In the context of an individual or an object, an 'anchor' provides stability or confidence in an otherwise uncertain situation. This matches Zofia's own character with her own perseverance and determination when it comes to both her military and personal life, the latter of which being her attempts to reconnect with Ela.   The name used to occasionally describe Zofia's Impact Grenades, Filipinka, originate from an unofficial yet common name for the ET wz. 40 hand grenade. This grenade was used in the Home Army resistance movement during Poland's occupation from Nazi Germany in World War II. It was a cylindrical impact grenade, a profile that aptly describes Zofia's own Impact Grenades.   As Ella's sister. When Ella joined Rainbow Six, she joined the Rainbow team in just three months, using her personal connections, as she wanted to make her family relationship more rejuvenated. When I was young, I almost drowned in boys' simple fun, so I closed my mind to everyone, but I learned how to believe in others by their members. It is the operator who mentioned marriage for the first time among the emergence operator, and there is daughter of two years old in the subordinate. Ella is called Zoe.

A Medium Armored Operator, Zofia has access to the KS79 LIFELINE, a double barrel launcher that can launch either impact grenades or concussion grenades. 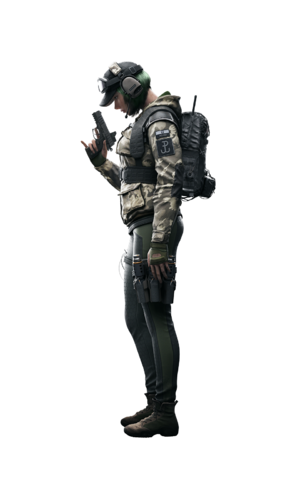 Ela (Elżbieta Bosak) “So, you're a big shothuh?”   Born in Wroclaw, Elżbieta Bosak is the youngest daughter of Jan Bosak, former commander of the Polish Special Forces unit GROM.   Experiencing some difficulties while attending a military high school, Ela left Poland behind after graduation. In Berlin, she studied Fine Arts, but her interest started to fade as the appeal of her old life slowly caught up with her. During her stay there, she made the acquaintance of the owner of a small private military company, who made her a job offer. Craving the adventure and financial independence, Ela accepted. 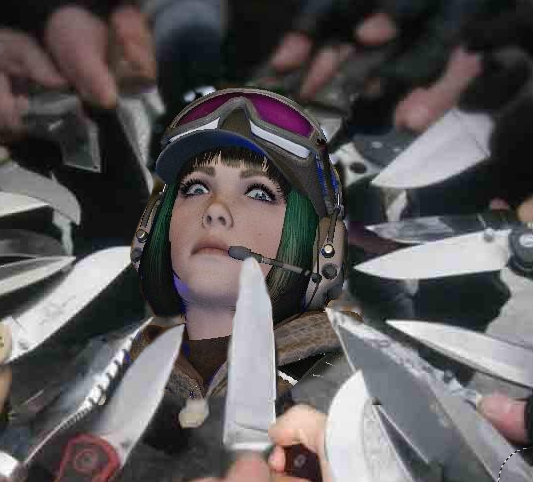 Working as a PMC in Iraq, Ela gained a reputation. Known to possess an impressive range of abilities, her attitude was the only obstacle standing in her way. While she was seen as a prized addition to any squad, her employers monitored her closely to investigate reports of authority issues. Four years into her deployment, she received the first news from home, which stated that her father had taken his own life.   A few months after her father's death, Ela terminated her contract and started training to pass the GROM selection as a civilian. Impressed by her determination and prowess on the field, the GROM saw in her a rare opportunity. Amidst the Polish Forces, she developed an expertise in Countering Threat Networks (CTN) and helped design advanced Exploitation methods to extract intel on a target's intentions and supply routes. One of her most well-known ventures is Operation Orange Sky. Joined by Valkyrie, SEAL's intel expert, Ela spent months infiltrating a warlord's inner circle before dismantling his network without harming a single civilian.   Psychological Profile Independent, creative, and rebellious, Elżbieta is intimate with the risks involved with her particular role, having suffered many losses in Iraq. The sudden death of her father provided her with a profound need of purpose. Elżbieta internalized the belief that she must prove posthumously her worth to her father and make amends. She uses her memory of him to push herself to unrealistic standards and to lead high-risk operations. ================================================

It was not a police officer, but a member of the military. For reference, it was blonde in the first leaked image. 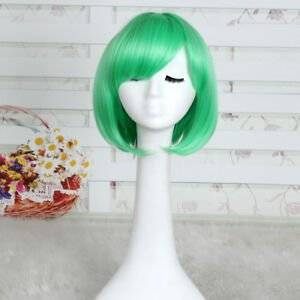 Initially, Ela had a big problem with balance like Blackbeard, and with the best equipment and the high combat strength of the guns, it was the best team of the defense team with the utilities that help the team. Because of this, the strong utility that comes from shrinking mines has been weakened due to the continuous nerf, and the unique one-to-many capability and weakness of mid-range have weakened. A "Tempest" is a violent, windy storm. Reflecting Ela as a character, like a tempest, she's a tumultuous individual, known for her rebellious, independent nature.

A Light Armored Operator, Ela comes equipped with four Grzmot Mines; concussive mines that disorient any who come within range. She also keeps the fourth one in reserve to use when she is in a downed state. Grzmot means "Thunder" in Polish.           I hope you have fun reading it. If you have any errors or wrong parts, I would appreciate it. #LOBClancy #OperatorsStory #Operators