Happy New 2019! This is Lob Clancy’s Rainbow Six Siege Operators Story. Today, I’d introduce the background and story of German GSG 9 crew. I hope you have fun reading it. If you have any errors or wrong parts, I would appreciate it. #LOBClancy #OperatorsStory #Operators 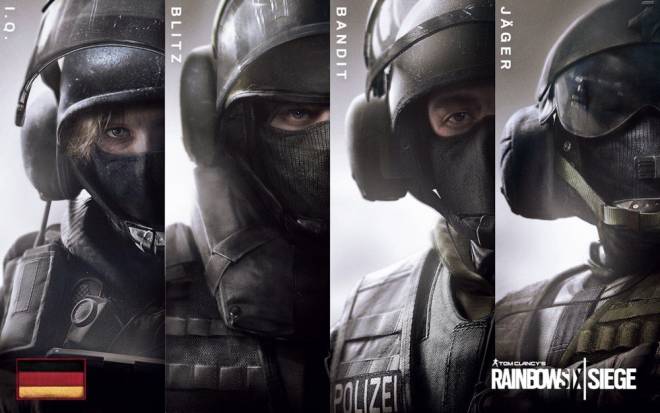 GSG-9 The Grenzschutzgruppe 9 der Bundespolizei (Border Protection Group 9 of the Federal Police), commonly abbreviated GSG 9, is a German counter-terrorism and special operations unit. It was created as a result of the Munich Massacre where Germany's law enforcement found itself severely compromised due to their failure to rescue the hostages and stop the terrorists as well as the country's historic relationship to Jews and Israel. 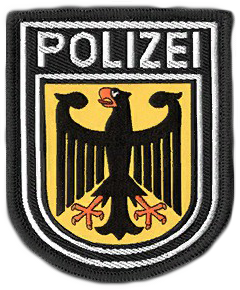 The symbolic color is yellow. They have distinctive wide helmets, comfortable tops and jeans, adidas sneakers. In fact, police officers, including GSG-9, often wear these uniforms. 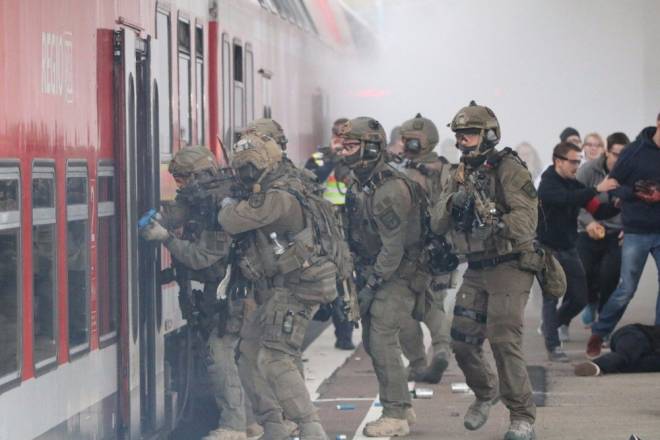 The whole concept is neutralized. Both attacking and defending are specialized in neutralizing their opponents with their own electronic equipment. And all the operators except Blitz are light armor, Blitz is the only middle armor speed among the shields, and the performances of the members' weapons and special abilities are good, and all four operators are popular.   Attacker : Blitz, IQ Deffender : Jäger, Bandit 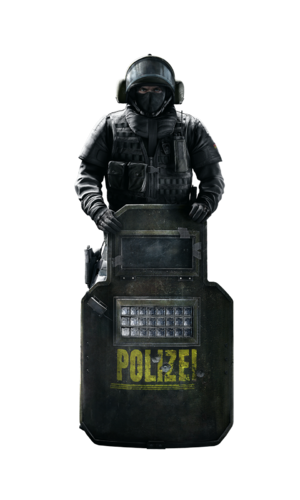 BLITZ (Elias Kötz) “Remember. Point your gun at the bad guys!”   A student of Hermann-Böse-Gymnasium, Kötz excelled academically and as a sportsman in the HBG's bilingual program. His imposing physique made him an exceptional athlete, he carried his experience on the field into his military training. His jovial nature and academic background eased the transition from a Schnelle Kräfte soldier in Kosovo to a member of GSG 9. Kötz was integral to establishing an anti-terrorism unit in India following the 2008 attack in Mumbai.   Psychological Profile Kötz has seen his share of battlefield horrors but is mentally resilient. He uses humor to disarm and as a device to manage stress during operations. He is the first to rush a barricade and is always willing to place the team's safety over his own. Kötz rejects the concept that his deeds are in some way heroic. When faced with overt praise, he will become self-effacing. -------------------------------------------------

Like other GSG-9 crew members, they were heavily armored with shoulder guards and sheath guards as well as robes and aggressive shields. He is small but has a very big body, boasts a unique shoulder width with Sledge, and the difference is obvious when compared to the same team members IQ, Bandit, and Jager. So even if you take the shield, you are struck and die.   Look at the dialogue, he is a slightly shy and playful personality. He use humor to relieve the stress of the crew due to the setup operation. The ambassador for raising the team members is "I'm the blood iron! I will stop it!", "Let me see where I am!" At the start of the terrorist attack, the ambassador said, "If you want to sneeze, do it now." "May I go to the bathroom for a while?" Or "Should I protect my team again?" . He is also a character with a very good character. He seems to have a humble appearance even if he praises the heroism and gives priority to the safety of his team members. The GSG-9 crews are accentuated by German accent, but unusually Blitz is accentuated by German accent. “Reel loading caribami”   An operator with a speed / glove rating changed after Kapkan, and the actual speed is slower than the two speed crews because of the shield. 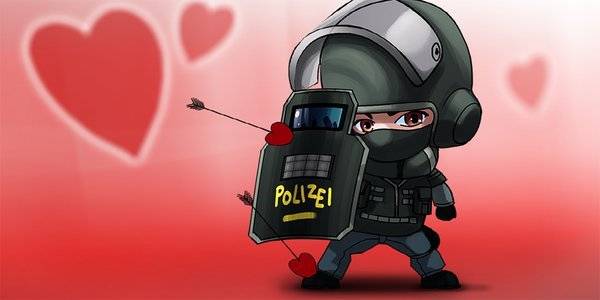 In Valentine's Day memorial illustrations, the arrows of Cupid shot by IQ are shielded. The legs were hit.

IQ (Monika Weiss) “We're not going in blind.”   Weiss developed a knack for electrical engineering early in life. At sixteen, she completed her first internship with a local tech company. She would continue her education at MIT and Caltech in the United States. After university, she traveled for a year before dedicating her life to a new challenge, the Bundespolizei (BPOL). Weiss thrived in her new environment and after two years with the BPOL, she was recruited by GSG-9. A brilliant overachiever and a fast learner, Monika Weiss is a natural at almost everything she tries. With an Ivy Leagueeducation in electrical engineering and service in GSG-9's technical testing and airborne units, she uses a device which detects electronic traps and gadgets at a distance. Psychological Profile A brilliant overachiever and fast learner, Weiss has been successful at nearly everything she tries. This facility, however, has conditioned her to refuse failure as an acceptable outcome. This can be manifest as borderline obsessive behavior when tackling obstacles that are perceived to be difficult or exceptionally challenging. -------------------------------------------------

She is hot and popular amongst the community and has been popular since before the addition of other female operators and appearance updates.   The handgun with IQ in the image is Colt's M1911, but it can not be worn in real games. In the illustration, the pin or cannon wearing the western zebra is a revolver, but the illustrations are illustrations of jade, like an alibi with an automatic pistol.   Because of the passive impression than the idea of ​​special ability, IQ is sometimes referred to as such a nojam car to be alone. IQ is a joke that people who play IQ are supposed to be a GSG challenge, but people who are picked up by Blitz or who are trying to see IQ's butt. Because it has a good firearm and a 3-speed offer, it can be used for rush like a reserve force running on attachments.

It is also useful for beginners to learn the camera position of the map. It is easy to learn the location of the camera if you visit the map by yourself in a custom match. It also has the advantage of being excellent at detecting and removing remote control bombs that terrorists spread all over the place in the terrorist mode. And the biggest threat of PVE, bomb disease, can be detected in advance. If you are a tip, AI usually puts bombs in one room. In the video, I am holding the M1014, the FBI SWAT weapon, but the IQ is an offer that does not use the shotgun itself other than the M1014. A Light Armored Operator, IQ's unique gadget is the RED Mk III "Spectre", which can locate any electronic device in the immediate vicinity. 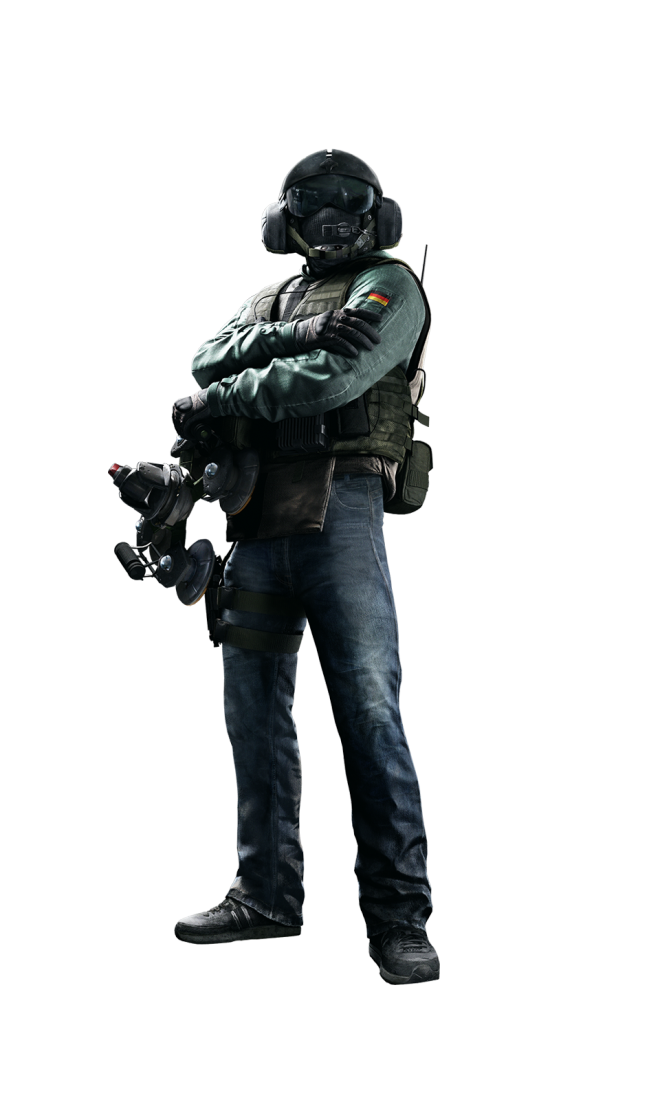 JÄGER (Marius Streicher) "I expect you to perform like a well-tuned engine!"   Raised by his uncle who was a mechanic for what later became the Bundespolizei (BPOL) Aviation Group after reunification, Streicher joined BPOL as a helicopter technician. He began designing defensive weapon systems, including a ground-based Active Defense System (ADS) prototype that caught the attention of the GSG 9. A veteran of the GSG 9 anti-piracy ops in the Indian Ocean, he was later recruited to Team Rainbow.   Psychological Profile Streicher is highly creative and curious, with a strong desire to serve. He has a tendency to lack humility. Though he has a remarkable affinity for complex machinery, he is not adept at reading social cues. Coupled with his boisterous tendencies he can be a bit abrasive. -------------------------------------------------

Jäger, in German, means "Hunter". He is a person with considerable engineer tendencies. The proprietary ADS was developed by Jager. The line "I'm an engineer, not a medic!" is a reversal of the Star Trek catchphrase "I'm a doctor, not a...", originally used by Dr. McCoy. 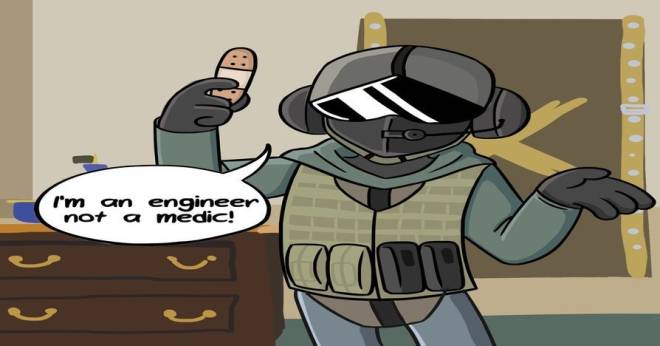 Because he is from a helicopter technician, he wears helicopter pilot helmets. Helicopter operation is also possible, so the helicopter is directly driven by the helicopter, and the UH-60 is driven by the hospital and paradise parts. Height is 180 cm, but weighs 69 kg. The Blitz of the same team is 6 kg more than the smaller one, and is even 1 kg lighter than the Ike, a female operator of the same team. It seems to me that I am a mechanic who does not need to spend much time. However, once the Rainbow Six team members endurance is good, but I do not know the personality that is not modest and not able to stay at a certain time, it is the nature which is disgusting. These symptoms are symptoms and personality that are commonly found in high intelligence, so-called gifted. The part that I understand when I think about the genius of Jager. A Light Armored Operator, Jäger's unique gadget is the ADS-MKIV "Magpie", where they can intercept live grenades before they detonate. 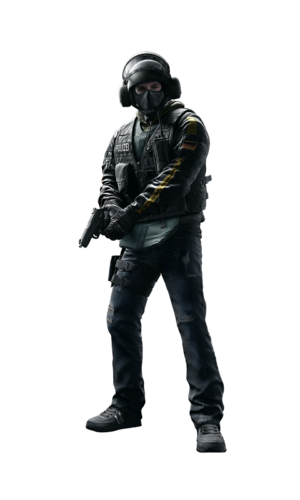 “Your gear come with that polish?”   Brunsmeier and his twin brother Cedrick joined the Bundesgrenzschutz (BGS) the day after their eighteenth birthday. Stationed with border patrol he would spend his first year getting accustomed to following orders and filing paperwork. Psychological Profile A prankster, Brunsmeier honors and humiliates his brother's memory each time he deploys the Crude Electrical Device (CED), the weapon responsible for Cedrick's early retirement from the BGS. Resourceful and adaptive, Brunsmeier relies on his cunning for survival. -------------------------------------------------

There is a video that makes the bandit a druggie by editing only the "drug" part of the introduction video "I had to deal with drugs too".   Bandit was assigned to a joint task force aimed at quelling the growing threat of the Red Army Faction (RAF) in his second year with BGS. He was recruited by the GSG 9, spending four years as undercover in the Hannover Chapter of the Hells Angels. In the Rainbow Six Siege Intro Video, an unnamed, maskless GSG 9 bearded male Operator can be seen as part of a profile dossier. This unnamed operator has been speculated to be Bandit, as the years 2006 and 2010 are marked as notable years on the Operator's dossier. These correspond to dates in Bandit's own bio, where he went undercover in 2006 and departed from his undercover duties in 2010. In addition, after the year 2010, the word "Exits" can be seen, possibly referencing the year Bandit departed from his undercover duties.   A Light Armored Operator, Bandit's unique gadgets are four Crude Electrical Devices (Shock Wires). These devices send an electric charge through metallic gadgets and will damage those who come in contact. In the Closed Beta of the game, Bandit had an overall 52.3% win rating as a defender.