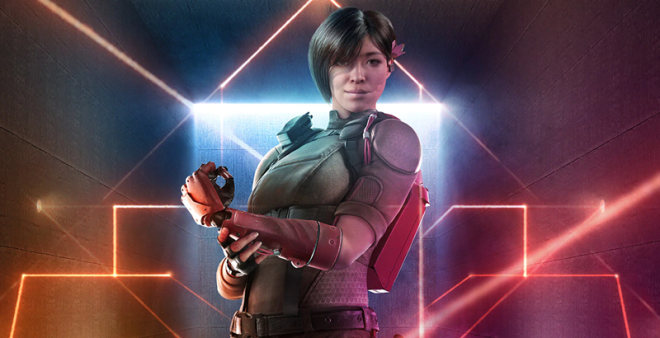 On November 9th,, Rainbow Six Siege’s Y5S4, Operation Neon Dawn update was revealed and Aruni was available to the test server. Aruni’s background story is that she used to be part of the Royal Thai Police (RTP), but after an accident, she retired and joined the Rainbow team as part of Nighthaven.   Aruni’s appearance is quite unique. Due to her background of getting seriously injured during a terror investigation, her left leg and arm are replaced with prosthetic ones, and she has a scar on the left side of her face. In game, she uses her prosthetic arm to shoot the Surya Gate, her unique ability, and punches with her prosthetic arm as her melee attack.   This time, we are going to check out Aruni’s ability and her loadout, who will be available soon at the Y5S4 season. 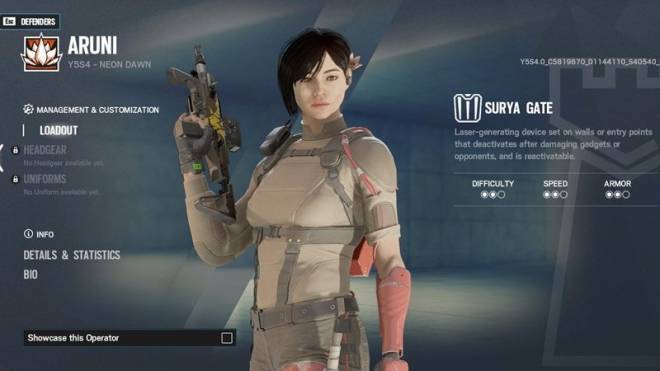 ▲ Aruni, with her impressive scar on her face, and both her left arm and leg replaced with prosthetic.   ▣ Unique ability - Surya Gate   Aruni has the Surya Gate, which she can deploy on walls, windows, doors, and hatches, as her unique ability. Surya Gate shoots out a laser gridline, which can damage the attackers, or disable projectiles, gadgets, and drones. This allows her to not only delay the attackers coming in, while blocking enemy projectiles like Jager’s ADS or Wamai’s Mag-Net System. Here are the specific details on the Surya Gate.   ▶ If the attackers run in to the Surya Gate they will take 30 damage.   ▶ You can deploy up to 3 Surya Gates, and because they are deployed from her prosthetic arm, you have to be close to where you’re deploying.   ▶ If defenders get near the laser, the gridline deactivates and can freely pass through. The laser reactivates once defenders are away.   ▶ If an attacker got in contact with the laser or if the laser disabled a projectile, it gets deactivated for 30 seconds, and it can be reactivated by having a defender shoot the Surya gadget.   ▶ Surya Gate does not get destroyed if you destroy the wall or window it’s deployed on.   ▶ When the Surya Gate is deployed, if leaves a gap big enough for a drone to go by, and you can throw projectiles through here without getting destroyed. If you block this gap with a deployable shield, the drone can’t go through. 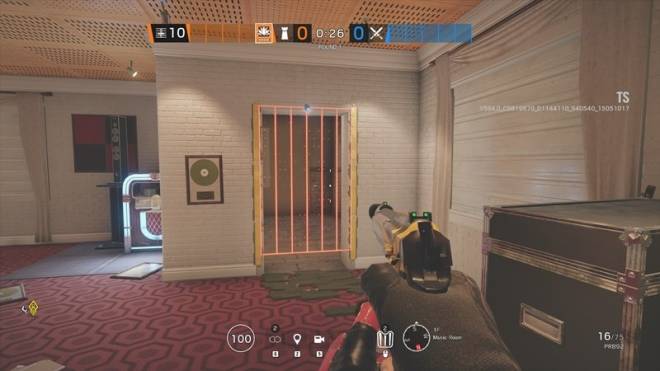 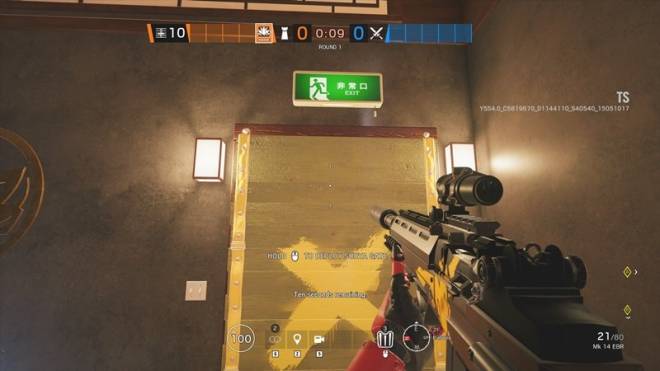 ▲ You can’t launch the gadget from a distance, so you have to be this close when deploying. You can pick it up and redeploy as well. 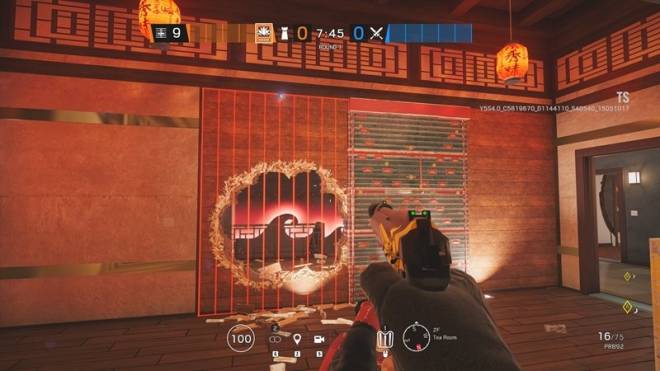 ▲ You can make a rotation and set the lasers there so only the defenders can use the rotation. 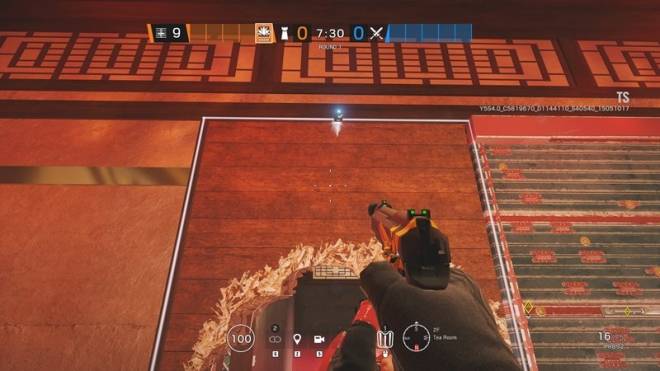 ▲ Once the defenders get this close, the laser automatically disappears and can safely pass through 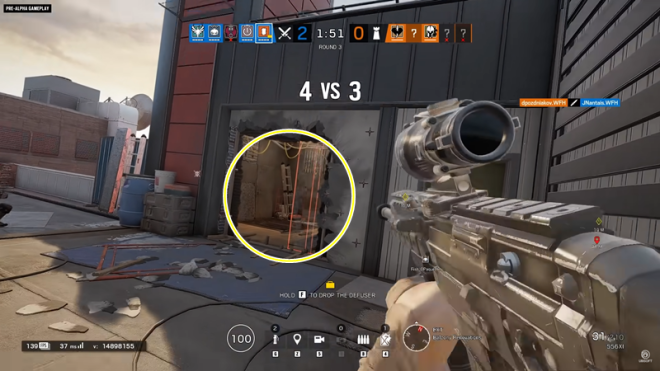 ▲ If the attackers go through the laser or throws a projectile at it, it gets deactivated for a while. 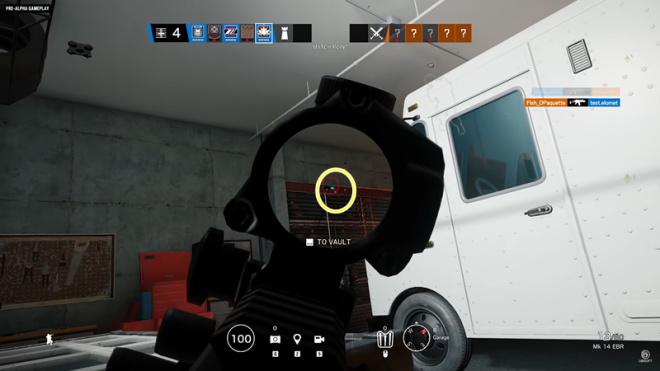 ▲ After its deactivated, if the upper part of the gadget opens, you can shoot it to reactivate it. 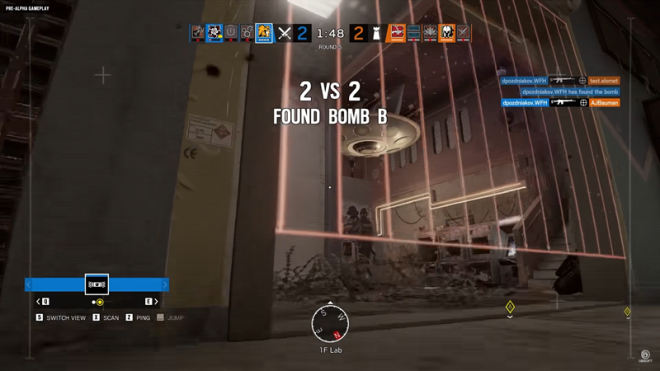 ▲ If deployed on a door, it leaves a gap on the bottom for drones to go by. You can roll your frag grenade through here too. 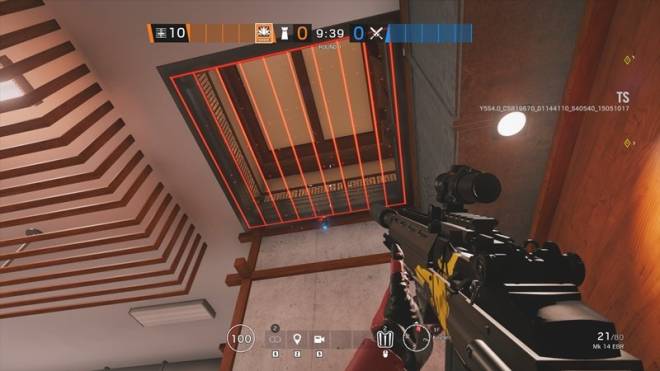 ▲ You can use it on a hatch as well, making it useful when defending 1F after breaching 2F.   ▣ Passive Skill – Reinforced Prosthetic arm   Aruni’s prosthetic arm has a special passive. Due to it being a special reinforced prosthetic, her melee attack is a punch motion, and you can destroy barricades or Castle’s Armor Panels with one melee attack. This gives her an advantage when doing a surprise runout play.   Not only that, punching a non-reinforced wall leaves a decently big size hole on it. It destroys the inner wooden structure as well, so you can use it like a shotgun. This means you can melee attack a wall 4-5 times to make a rotation you can crouch through. This is slower than using an impact grenade or Oryx’s Remah Dash, but it doesn’t require a gadget or health, so it’s quite useful. 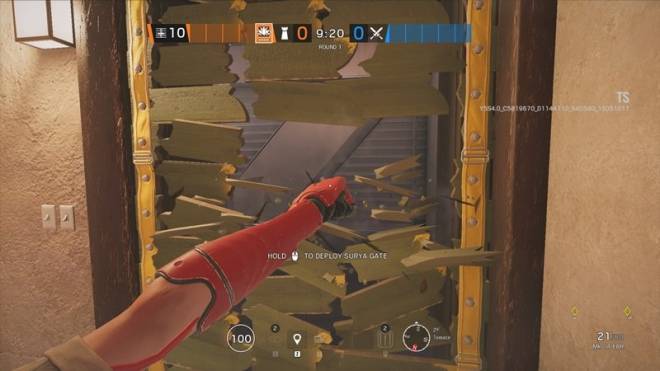 ▲ Being able to destroy a barricade with a single punch is big. 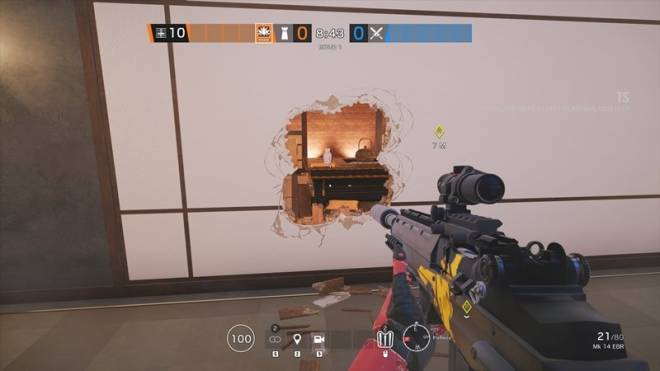 ▲ Being able to make a hole you can vault over with four punches is also big. 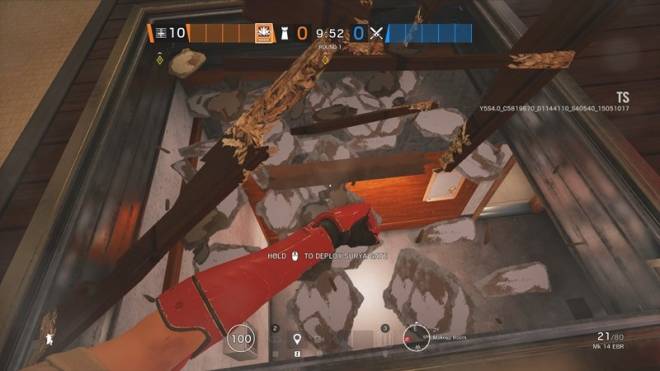 ▲ You can open a hatch with only one punch too, making it useful for a surprise drop.   ▣ Loadout - Mk 14 EBR DMR and P10 RONI SMG   Aruni has Mk 14 EBR DMR and P10 RONI SMG as her primary weapon, and is the first defender with a DMR. Mk 13 EBR is Dokkaebi’s DMR, but she can only use a suppressor as attachment and the Scope 1.5x for magnification.   However, if in range, you can down an enemy with 2-3 three body shots, so if you can get used to the DMR, it’s a great choice. However, unlike Dokkaebi, you don’t have a machine pistol like SMG-12 as your secondary weapon. You have PRB92, a regular pistol so be mindful of that. 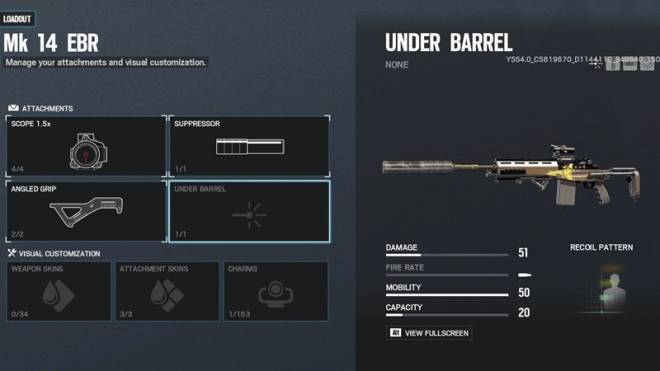 ▲ She’s the only defender with a DMR, but unlike Dokkaebi, she has some limits to her attachments. 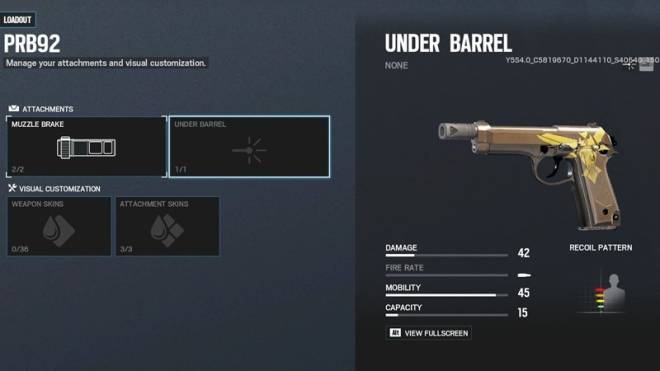 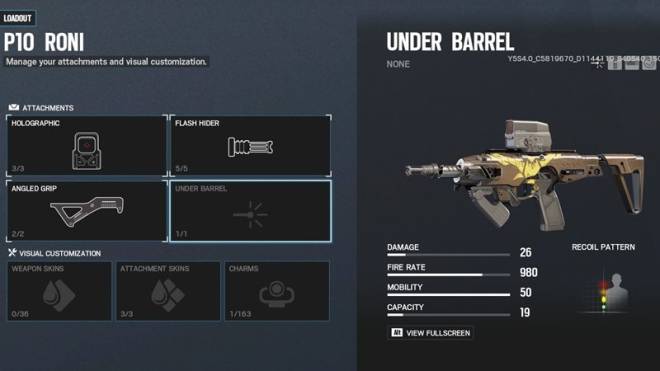 ▲ If you get used to the reloading, P10 RONI SMG is also a good idea since it has a fire rate of 980 and low recoil.   P10 RONI SMG was Mozzie’s primary weapon, with a high fire rate of 980, and low recoil, but it has a very small capacity of 19+1. However, the reloading is extremely quick, and if you know when to reload, it’s a strong choice. Unlike Mozzie, Aruni doesn’t get magnification, which is a bummer.   Aruni can take the barbed wire or proximity alarm. Considering Surya Gate is a gadget that delays the attackers entrance, they both have their advantages. While barbed wire can delay the attackers coming in even more, the proximity alarm can be placed at other entrances where the Surya Gate wasn’t deployed, to detect where the attackers are coming in.