Greeting! This is Lob Clancy’s Rainbow Six Siege Operators Story. Today, I’d introduce the background and story of Russian Spetsnaz crew. I hope you have fun reading it. If you have any errors or wrong parts, I would appreciate it. #LOBClancy #OperatorsStory #Operators 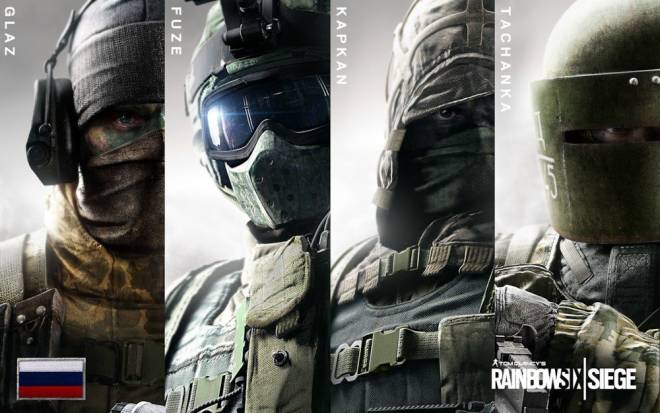 The Russian Special Purpose Forces, or Spetsnaz, is an umbrella term for any special forces in Russian, literally "force of special purpose". 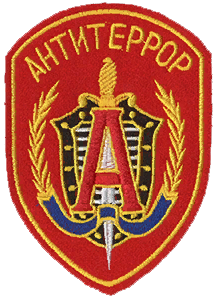 The symbolic color is red. The concept is the Gorka combat uniform, the SSO СМЕРШ, and the Defender 2 body armor worn by personnel except Glaz, one of the combat uniforms worn by Russian Special Forces. The camouflage patterns are different for SS, EMR, and KZS. It belongs to Alpha group among the specs. Unlike other troops, it seems that they have carried out politically sensitive operations, considering that there are many edits to the toxic dispatching activities in the history of the members except for TACHANKA. 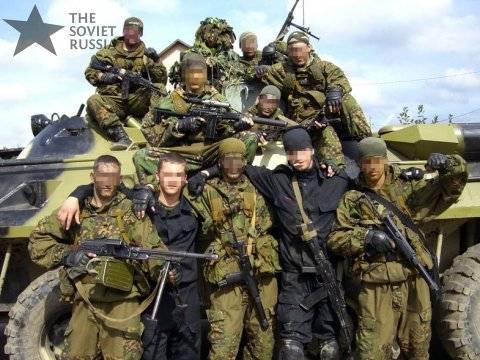 The overall concept is firepower, armed equipments are concentrated on the aggressive side, which is quite good firepower, but all of the unique equipment has a limitation that the limit is clear and can play an active role.   Unlike other units, Russian optic sights are used instead of sights. The magnification is the same as that of the other unit but differs in the reticle and sphere border thickness. With the exception of Tachanka, there are no more than 40 generations. Compared to other units, the average age is younger. In addition, with SAS, all members of the crew are men.   Attacker : Glaz, Fuze Defender : Kapkan, Tachanka ----------------------------------- 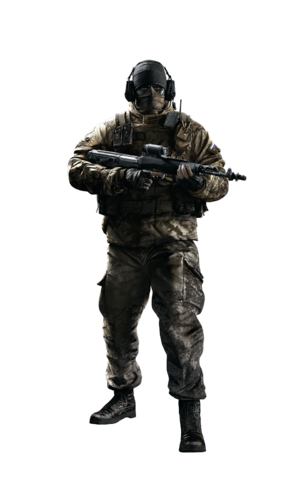 Giaz (Timur Glazkov) “Не тратьте ваши пули. (Do not waste your bullets.)” Glazkov was born and raised in Vladivostok, Russia where his father worked in the shipping industry. Glazkov studied art in secondary school, until the Beslan school hostage crisis inspired him to transfer to the Cadet Corps and pursue a career in the armed forces.   Psychological Profile While Timur doesn't thrive in large groups, he is engaging and expressive in one-on-one conversations. He has a patient temperament and can be very introspective. His background as an artist, his curiosity, and attention to detail has trained him to be mindful and precise. This trait makes Timur an excellent spotter and sniper. -------------------------------------------------

Glaz is a skilled painter. His artworks are expressive and colorful which starkly contrasts his military life. Glaz (Russian: Глаз) means "eye" in Russian, this coincides with his stealth and marksmanship. Glaz's headgear consists of a Russian "Chechenka" hat, either a "Kosynka" or a "Multi-wrap" over his face, and a form of active hearing protection similar to MSA Sordins, or Peltor ComTacs.   A Medium Armored Operator, Glaz's unique gadget is an HDS Flip Sight for his OTs-03 marksman rifle. Whilst Aiming Down Sights with it, it also comes with a Thermal Feedback System which can outline long-range marks even through smoke for easier shooting. 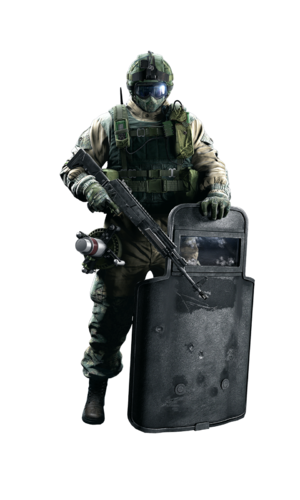 FUZE (Shuhrat Kessikbayev) “Focus on the task at hand.”   Kessikbayev grew up in a military family in Samarkand, Uzbekistan. After his family emigrated to Russia shortly before the collapse of the Soviet Union, Kessikbayev followed in his father's footsteps and enrolled in the military, where his facility with technology landed him a spot in the coveted weapon testing brigade at Alabino firing range near Moscow.   Psychological Profile Kessikbayev is an expert tinkerer and a master craftsman, more at ease with the workings of machines than those of people. His gruff demeanor and curt speech should not be mistaken for misanthropy. He possesses a strong moral conviction. -------------------------------------------------

Except for recruits, it is the only operator who can use shields as his main weapon, even though he uses his own equipment instead of shields. Since the Blitz update, he has become a Named 1 Speed Operator with only two of the attacking teams with Montagne. The defending team has the slight advantage that even if the character itself is identified, it can not be seen whether or not the shield has been heard until the character is seen directly or the team member notifies the armed state. It is also the only first-rate offer to equip a rifle except for reserve forces. 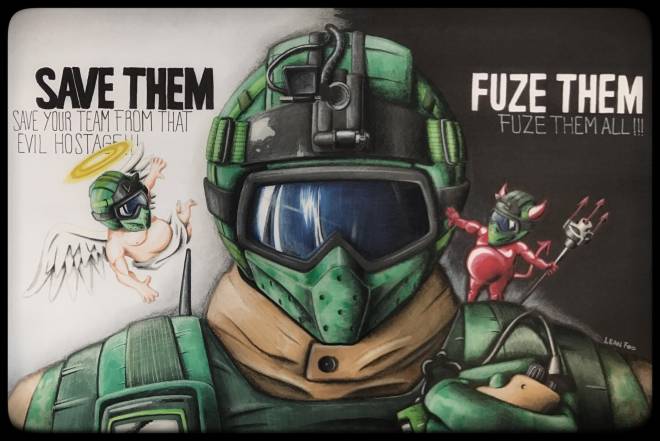 Because newbies and trolls choose Fuze, Team Kill as a Cluster Charge, or kill hostages, there is a meme called "Fuze puts a Cluster Charge on hostages." In the explanation of the operator, "If Fuze does not care about the incidental damage," Fuze is the best. "In the background of this meme, Fuze does not consider the civilian casualties in the background of the meme. There is a part where Ash is dry, and Fuze's elite skins have a message to bomb hostage. Because of this, it is portrayed as killing the hostage or co-worker in the hostage before the second creation. 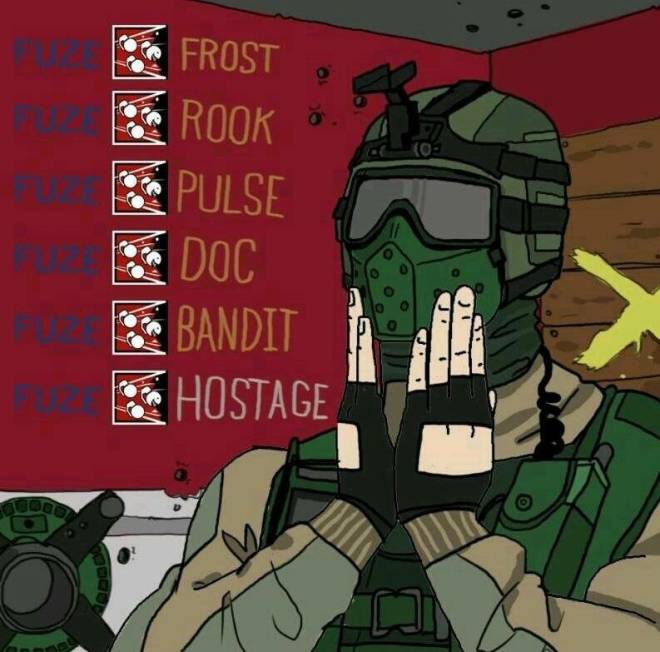 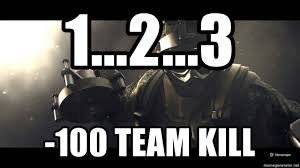 KAPKAN(Maxim Basuda) “Mind your step.”   Born and raised in Kovrov, Basuda is the eldest of three sons of parents who were factory workers. Hoping to escape a grueling life in the factory, he enlisted with the Ministry of Internal Affairs and was sent to Naryan-Mar, a small sea and river port town on the Barents Sea. Basuda became an avid hunter and trapper during his time in the Arctic Circle, before being transferred to Beslan in 2002.   Psychological Profile Basuda is a self-sufficient realist. He has seen the harsh reality of the world and does not allow that to hinder his ability to act. He's fascinated by psychology; what allows one creature to become a hunter and the other prey.   -------------------------------------------------

Kapkan (Russian: Капкан) means "trap" in Russian. Kapkan is the first Operator, not including the FBI SWAT Recruit, to receive a change post-launch related to their Armor and Speed rating. His Armor and Speed rating at launch was Heavy (3 Armor, 1 Speed).Kapkan wears a Gorka 4 in SS-Spring pattern with a Gearcraft Viper Hood and a Fort Defender 2 Low Profile body armour with an SSO/SPOSN Avizent Smersh AK over it. A Medium Armored Operator, Kapkan comes equipped with his homemade EDD MKII Tripwires, special mines that can anchor on doorway and window frames, detonating when enemies trigger its laser. Kapkan has up to five Entry Denial Devices that can be anchored on any barricadable doorway and window frame. These devices will trigger immediately when an enemy passes through the tripwire, dealing heavy damage to anyone and anything in its explosive radius. 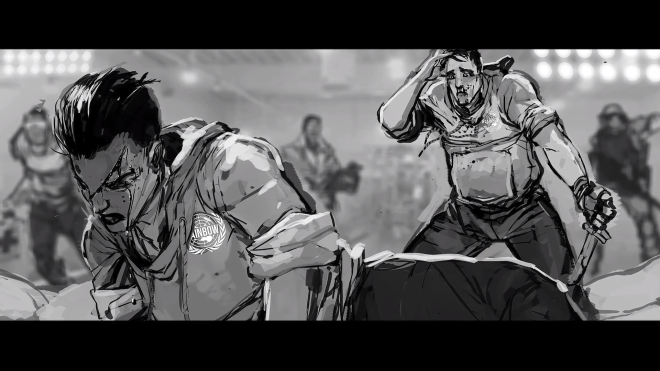 The relationship with operator Finka belonging to CBRN was added. While Finka was training in melee training when he enlisted in Spetsnaz, he took an exaggerated pose, slapped his feet and cut Finka's face, and at this time Finka's fist, Kapkan ran his nose and ribs. But since then, they have recognized each other and have become close.   Kapkan is a very efficient trapper, being capable of placing his traps inside doorways and windows, which will be detonated by enemies going through them. The EDD Mk II can be mounted into windows and door frames. It explodes when enemies enter trapped entryways, projecting shrapnel at anyone located in the device’s blast radius.

TACHANKA (Alexsandr Senaviev) “Весомый аргумент готов. (A weighty argument is ready.)”   Born into a Red Army family, Senaviev enlisted when he turned eighteen. After the Soviet Union pulled out of Afghanistan, Senaviev was transferred into the Spetsnaz shortly before the collapse of the Union.   Psychological Profile Calm in crises. Alex harbors a joyous, if acerbic outlook. He has a limited social filter, which has gotten him into trouble in the past. -------------------------------------------------

His face was revealed that the helmet was taken off from the Outbreak scenes, but unlike Ash and Thermite that exposed the top face in the same trailer, it did not reveal the face with the camouflage balaclava. The first appearance comes with a DP-28 on his shoulder. When the troops ask where they came from, they smile and say, "I got it from a pile of bodies." Here is the tackle of the thermite, whether or not you get tired of the same jokes every time. After a few conversations with Serumite, Ash arrives at the briefing site. Since then, I have been briefed on the Soviet army firearms of the Second World War such as the DP-28, SG-43, PPSh-41 submachine gun and Najiang M1895, Ash was informed of the Soviet cosmic capsule, which was the cause of the incident, and he tackled the question of whether he thought it would be Russians, and of course the secrets of the Soviet Union. He answered that he wanted to let it know before it became a political issue.   Tachanka's machine gun is his most favorite thing, and he says he has restored the original parts as much as possible. The reason why Tachanka likes old-time weapons that have proven to be more practical than modern experimental weapons is because the modern warfare comes out without any reason. So to appeal to those who do not have military knowledge in UBISOFT, even with the RPK or PKM a little unusual, the old-fashioned Pulemyot Degtyaryov Pekhotny appeared. 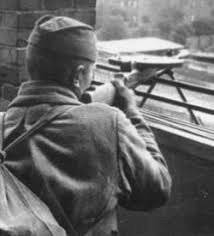 Tachanka's original affection is also great. The RP-46, which is not the original DP-28 but also a gun, can be used as a bullet. Perhaps the people around me seem to enjoy the surprising reaction quite. In addition, the magazine bin on the mount is actually a DP-28 magazine bin. In fact, there was a Tachanka infantry support wagon in Russia in the past. 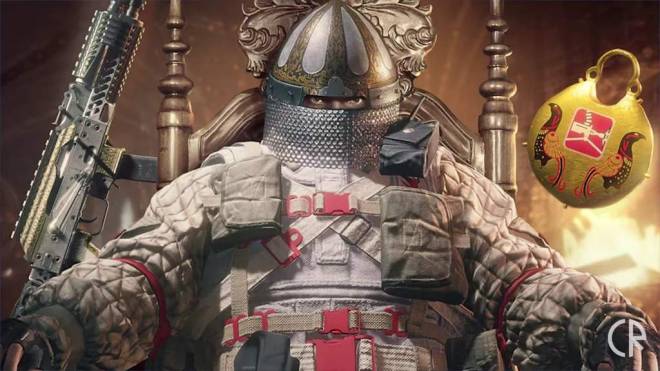 Tachanka's ballistic shield has "Lord" (Russian: Лорд) on its side panels, a reference to the community meme "Lord Tachanka".   The news about TACHANKA's rework has been around for a while, but it's not going to be fast because it's not so important among developers. There is also a possibility to delete the character. After the major tournament in Paris, Rainbow Six Tuber coreross and Bikini Bodhi talked to a developer who said, "TACHANKA may become a completely new character when trying to do a massive rework of a character called TACHANKA, It can be completely removed from the game by dealing with death. " There are a lot of people who talk about the comment in a joke such as 'Ubisoft can not kill God' and 'the monarch gets stronger when he dies'.