Welcome to Lob Clancy’s Rainbow Six Siege Operators Story. Today, I’d introduce the background and story of GIGN crew. I hope you have fun reading it. If you have any errors or wrong parts, I would appreciate it. #LOBClancy #OperatorsStory #Operators 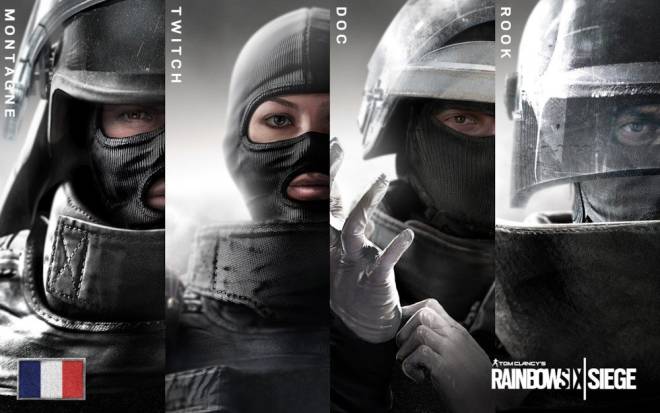 The National Gendarmerie Intervention Group, commonly abbreviated GIGN (French: Groupe d'Intervention de la Gendarmerie Nationale), is a special operations unit of the French Armed Forces. It is part of the National Gendarmerie and is trained to perform counter-terrorism and hostage rescue missions in France or anywhere else in the world. The symbolic color is dressed in blue. The concept is navy blue combat uniform, balaclava, bulletproof glass helmet, R1N Rhino body armor. 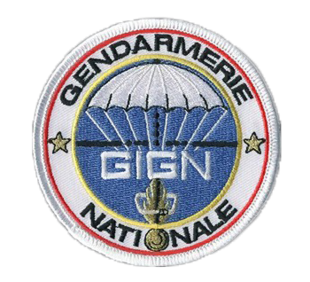 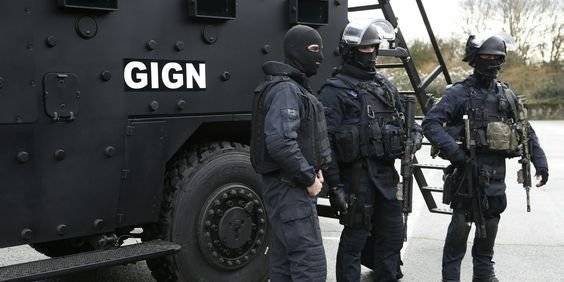 The whole concept is supported. Attack members eliminate threats or defend attacks to facilitate friendly entry, and defenders focus on strengthening the team's viability. With the exception of the two tricks, all 1 speed 3 armored crew members, the MP5 and P90, both of which are the common submachine guns of the defense crew, are excellent SMRs for both accuracy, performance and versatility. Good viability and easy-to-use gadgets make it suitable for beginners to play, but there is a disadvantage that the limits are clear due to the slow speed of movement, which is a chronic problem of one-speed offerings.       Attacker : Twitch, Montagne, Defender : Doc, Rook -----------------------------------

TWITCH(Emmanuelle Pichon) “Stop complaining. It's just electricity.”   Born in the historic town of Nancy, Pichon grew up in a family that valued education, particularly math and science. Early participation in sponsored computer programming competitions led to her joining the army cadets at sixteen.   Psychological Profile Pichon demonstrates an affinity for complex robotic systems and mechanical academia, due to an early exposure to analytical problem-solving. This ability transcends academia. Unlike many engineers who have the propensity to be emotionally disconnected or apathetic, Pichon is strongly intuitive and empathetic. She believes that technology's best use is to improve the quality of life. This principle motivates Pichon in her military service. -------------------------------------------------

The only 2 speed crew members of GIGN do not wear helmets, and they are the only female members. In reality, women can apply to GIGN, but there are no cases that have passed. He has been working as the engineer for the Rainbow team. He has developed the EE-ONE-D drones for Lions, Evil eye camera for Maestro, the hologram projector for Alibi (co-developed with Echo) and the CCE shield for Clash (co-developed with Mira).   Ghost Recon: Wildland Colaboration was in Bolivia to track Caveira. (...) The ghost team is a submerged troop, so quietly pulling the door with a rocket and going to the quiet side of the tunnel. He responds to Trident that he prefers a girl.   Medium Armored Operator, Twitch can deploy up to two Shock Drones. These drones can take out enemy gadgets from afar and shock enemies. The Shock Drones are specialized that can shoot shock darts at a target. Twitch has two Shock Drones, which replace her normal Drones and are deployed in the same manner, one spawned in during the Preparation Phase and the second one carried by Twitch on spawn. Shock Drones can fire small electric shock darts that can easily destroy enemy electronic gadgets and deal small damage. They can also be used to take out cameras on the map, removing the Defenders' access to map visibility through them. 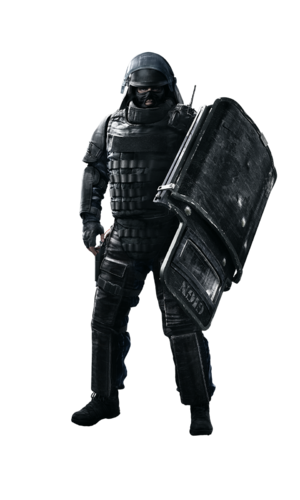 He has had a career in Flight 8969 Hijacking in 1994 and is a proven battlefield with a number of melee combat awards in the SWAT competition between Europe and the United States. He is Rainbow's third tallest big man. The scene of holding the shield is really Hype. Compared to other Heavy Armor Operators, the body itself is armed with armor, bulletproof, and protective gear, and it is the rock itself, the alias of the shield, and its own code name, MONTAGNE itself. (Montagne, in French, translates to "Mountain." ) Montagne is close friends with fellow GIGN Operator and CBRN specialist Olivier "Lion" Flament.   A Heavy Armored Operator, Montagne comes equipped with his Extendable Shield, "Le Roc", which can fully cover him from head-to-toe while standing, providing extra protection that no other shield in the game offers. This also allows him to be the ultimate point-man, blocking enemy bullets as allies attack from his protection. 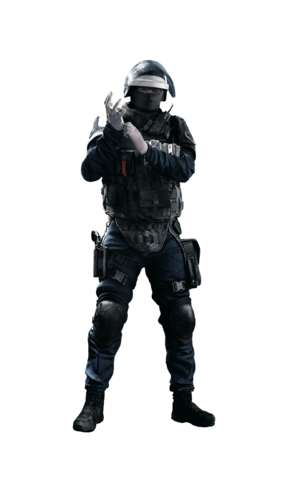 DOC (Gustave Kateb) “Call if you need a hand.”   Kateb grew up in an affluent family, in Paris' 16th arrondissement. At twenty, he abandoned a potentially prominent private medical practice in favor of a career with the French Defense Health Service.   Psychological Profile Kateb demonstrates a high degree of empathy for human suffering; he is a rare genuine altruist. He sees military service (especially the role of CTUs like GIGN) as noble in their dedication to protecting civilians. He considers the front line his natural habitat, as it provides him with the opportunity to have direct influence and impact of the welfare of the unit. His proclivity for conflict resolution makes him a valuable asset. -------------------------------------------------

As if to emphasize the concept of a doctor, there is a white shield on the shoulder and a white line on the helmet. There is defibrillation on the upper body, and surgical latex gloves are attached instead of regular tactical gloves. Among the GIGN members, French accent is strong, and French accent is notable.   An altruist with a strong conviction of compassion and for others. He hate fighting between the members of the team, but Doc is at odds with fellow GIGN Operator and CBRN specialist Olivier "Lion" Flament, whose actions in an incident in West Africa in 2015 for reasons of safety caused the deaths of several medical personnel, including one of Doc's colleagues. Doc thinks Lion lacks the empathy necessary to help in medical crises, while the latter think's that the former's humanitarianism is a liability. He appeared in the outbreak trailer. Dissect the cut arms of the infected person, explain the characteristics of the infected person to Ash, and then reappear as a controversial issue about ashes and measures against infection. Ashley and the Thermite react to nervous reactions to the C4, thermite and nuclear attack on the quarantine zone, and McIntosh, who is trapped in isolation, persuades Ash to rescue her doctor. Also, in the same event cut scene, the naked face of the helmet and baliklava was also revealed. Despite being in his early 40s, his head is bluish presbyopia, but he is a fairly handsome middle-aged man. 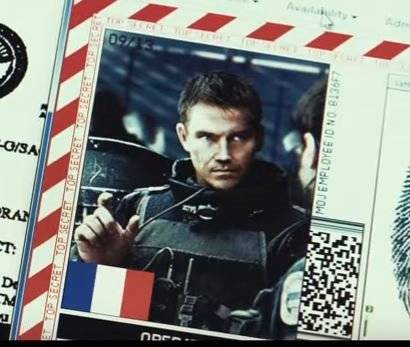 A Heavy Armored Operator, Doc's Unique Gadget is the MPD-0 Stim Pistol. It is able to revive and heal allies from afar. The Stim Pistol is suited for revitalizing Defenders, healing 40 health to any Operator that Doc hits with it, including Attackers. It is also able to revive downed Operators from afar with a single shot. 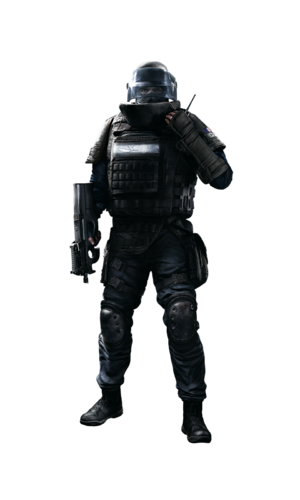 ROOK (Julien Nizan) “I won't let you down.”   In school, Nizan excelled at athletics, specifically in Track and Field. The youngest son of a working-class family, he enlisted in the Gendarmerie Nationale at eighteen and found himself assigned to the Highway Patrol unit. During basic training, Nizan discovered his aptitude for firearms, a skill that he would continue to develop and master over them during his time with the Gendarmerie Nationale. His skill with a rifle eventually attracted the attention of the GIGN.   Psychological Profile Nizan is idealistic and trusting. He can be impulsive and must self-regulate in order to remain on task. When his focus is clear, he is decisive and driven to complete the task at hand. -------------------------------------------------

According to his career, he is the instructor of trust training received by the recruits of GIGN. Operators in non-English speaking countries have accents that are unique to their home country, and look is a pronunciation that seems to have grown in the United States or Canada. I studied under American professors at high school and was fluent in English. It is also the youngest operator after mute. Rook's birthplace, Tours, reflects his nickname as the word "tour" can mean "rook" in French. 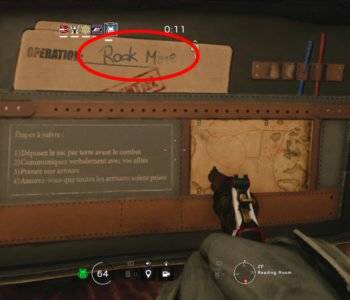 There is Rook mine meme. When I asked the reason why the player who had been teamed up asked me why, I came from the Rook mine. This meme was also applied to the Kevlar pack with the look of the Elite skins, and the Rainbow Sixth Reddish masse code also wears a look dress with MINE on the upper body. A Heavy Armored Operator, Rook comes with a bag of five R1N "Rhino" Armor Plates. These Armor Plates can be picked up and equipped for added damage resistance. Rook's Armor Plates come in a satchel which he can place down. In it, there will be five Armor Plates ready to be picked up. When worn, they grant a 20% reduction in damage for all Operators.