A guide to using Lion on Club House

■ Using Lion on Club House Club House is a large map with three floors, designed with a focus on rotation and mobility. It provides attackers with great opportunities to traverse safely as there are many smaller connecting rooms an attacker can use to flank and rotate around their opponent. However this map is also great for spawn peaking with many windows facing the main spawn areas of the attackers, so be cautious on your approach to the main buildings that make up this map.   Lion is a two speed, two armor operator offering a great weapon selection with a specialization in crowd control.   His gadget, the EE-ONE-D is a device that highlights any enemies that continue to move after a three-second warning. This scanning period lasts for several seconds forcing the defending team to remain where they stand unless they want to risk revealing their location. Their exact position can also be seen through walls and obstacles, making this particular type of scanning extremely useful. Don’t expect to actually reveal the locations of many enemies when using this gadget, rather think of it as a method of holding defenders in their current position allowing you and your teammates to move more confidently throughout the map. This gadget is especially useful if you have planted the defuser at a bomb site and you know defenders must now retake that bomb site. Using your EE-ONE-D device here makes this task immensely difficult for the defending team.   Lion the choice of using three primary weapons. The first is the V308 assault rifle. This weapon has a high level of recoil making it difficult to control. This weapon also features a 50 bullet drum magazine allowing you to suppress and pre-fire with confidence. The second option is the 417 Marksman Rifle. This is a single fire weapon that features a high damage output. A drawback to this weapon is the small magazine size. Regardless, this weapon is an excellent choice for long-range duels.   His third choice of weapon is the SG-CQB Shotgun. It is difficult to recommend this weapon as you will more than likely be facing most enemies at medium to long-range, however, if you want to have fun and rush with a shotgun, don’t let me stop you!   Lion has a choice between two secondary weapons. The first option is the P9 handgun which is a typical pistol and a solid backup weapon. The second option is the more atypical LFP586 magnum revolver. This weapon offers extremely high damage output at the expense of fire rate, recoil, and reload speed.   With Lion you can also choose to use stun grenades or claymores. Select whatever suits your play style. 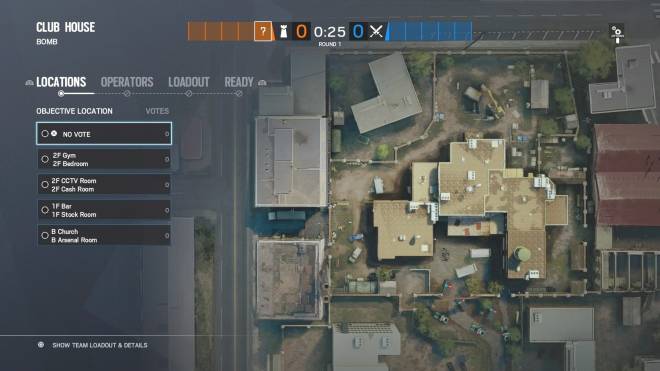 ▲ The sites you will have to attack on Club House   ▶ In case, the site is located at '2F Gym ~ 2F Bedroom' The Bedroom, Bomb Site A, has a lot of entry points that can get heavily exposed, use this to your advantage. There is a landing outside of the main window from which attackers can stand and peek from. As an attacker I would maintain the sight line this window provides for as long as possible, you will more than likely pick up at least one kill from this position. 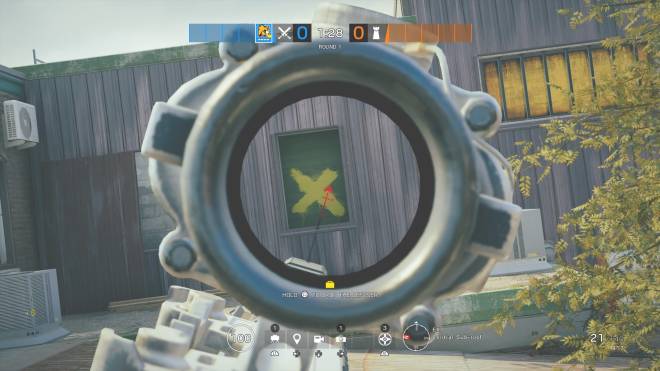 ▲ If you do decide to engage enemies from the sub-roof, beware of defenders peaking from this window.   There is a Bathroom in this site which can provide some cover for defenders. Drone out and frag this area to clear out any defenders unfortunate enough to be anchoring inside. 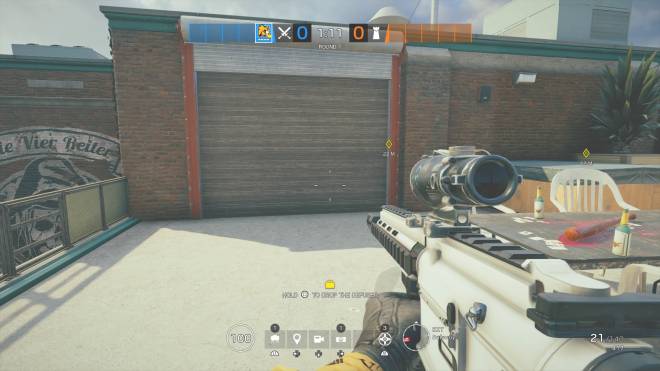 ▲ Opening this wall will allow you and your teammates to view the hallway that connects the bombsites.   The Gym or Bomb Site B is quite a small claustrophobic room. It has one window and one door opposite that window. This door opens out to the Bedroom Hallway. Attackers can use the Central Stairs to come up to this hallway or simply breach the side wall which can be accessed from outside. This wall will more than likely be reinforced. If you are a hard breacher such as Thermite or Hibana I would focus on using your gadget to open this area. Once opened it provides a great view into the hallway and stairs, you are sure to catch some defenders unaware as they move between the sites. ▲ Opening this hatch on the roof will put you in close proximity to Bomb Site A. 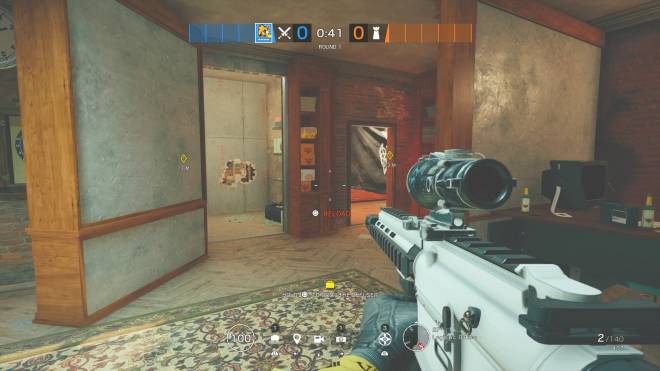 ▲ Going through the hatch will put you here in Logistic Office.   ▶ In case, the site is located at '2F CCTV Room~ 2F Cash Room' For the CCTV Room or Bomb Site B, attackers can approach from three different locations. The Eastern stairs provide attackers a view directly into the left side of the site. The Eastern sub-roof allows attackers to stand and engage defenders through the window. The walkway above garage can also be accessed by attackers. There is a breakable wall in this site which can be opened from outside while standing on the landing outside. 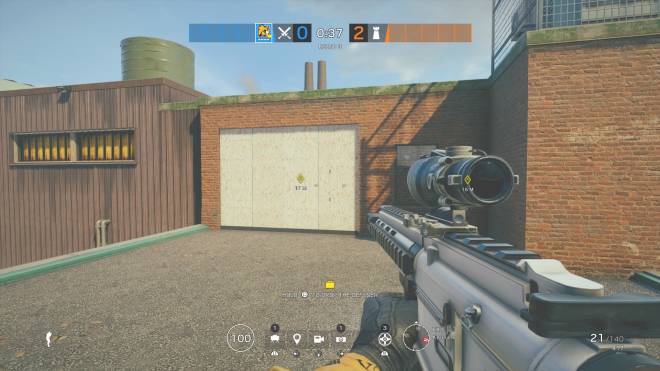 ▲ Use your gadget to get this wall opened as soon as possible. This will put defenders at a great disadvantage. This wall will probably be reinforced, requiring that your team has a hard breacher. 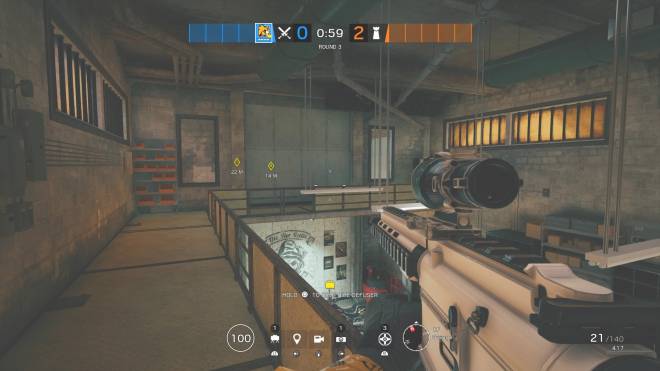 ▲ The other side of Bomb Site B, which can be accessed from the garage.   For the Cash Room, Bomb Site A, attackers should take caution if they are approaching from the garage, you will be exposed when crossing this open area. There is a breakable wall in this room which can view the Eastern Stairs when opened. 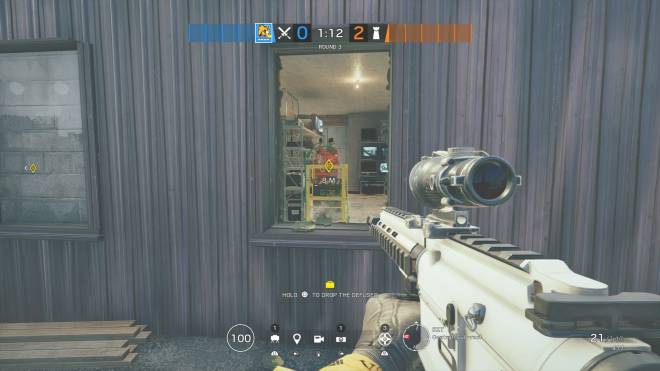 ▲ The Central Sub-roof provides you with a window directly into Bomb Site B. Make use of all of the access points into this room to overwhelm the defenders inside. 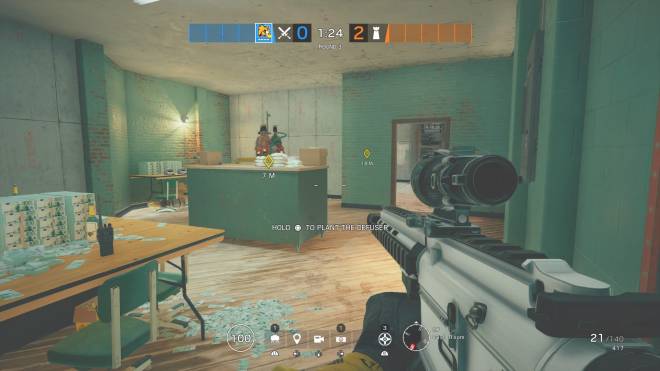 ▲ Bomb Site A is connected to Bomb Site B by a single door. 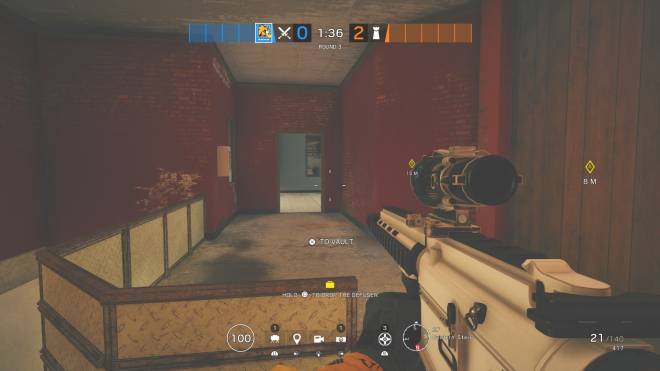 ▲ From the Eastern Stairs we can reach Bomb Site B, or breach into Bomb Site A.   ▶ In case, the site is located at '1F Bar ~ 1F Stock Room' The Bar, or Bomb Site A, has a lot of breakable walls and entry points for attackers. Both of Lion’s weapons are excellent options for this site as you will more than likely be engaging defenders at range. In addition to the breakable walls there are two wide doors from which you and your teammates can enter. Making a hole in the breakable wall between the bomb sites will allow Lion to use his V308 assault rifle or 417 marksman rifle to maximum effect, covering both bombsites and engaging enemies at range. Use the ACOG scope attached on your weapon to your advantage and quickly peak this area aiming for headshots each time. 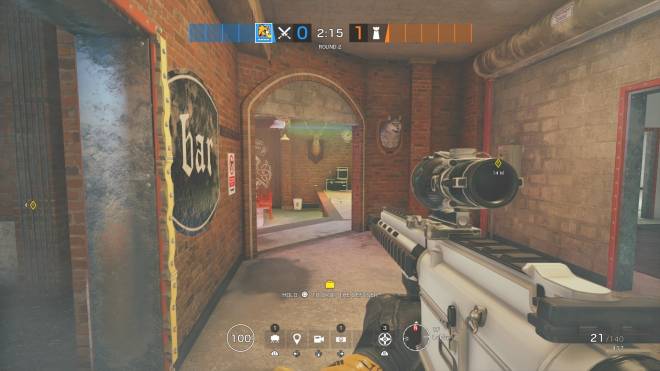 ▲ The Lobby provides a route to both bomb sites. Expect heavy resistance here. 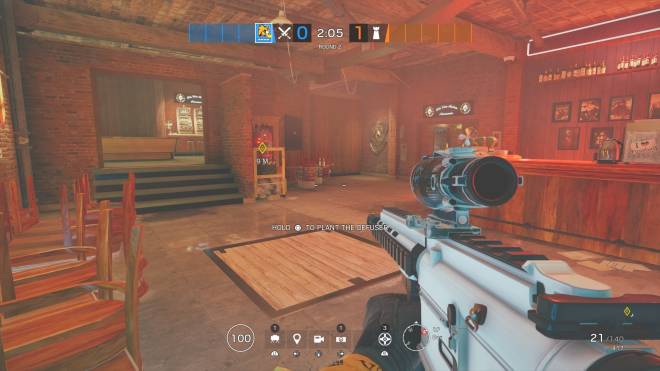 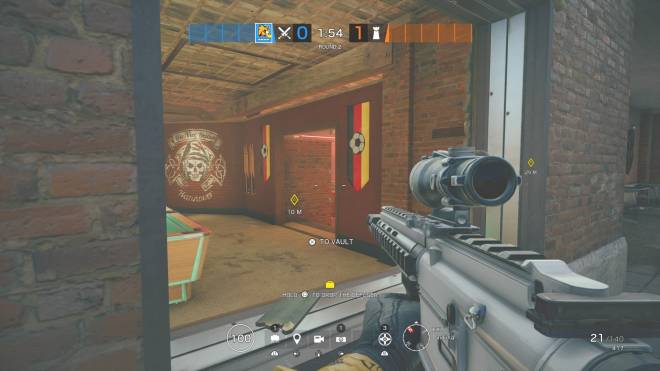 ▲ This window at the front of the building can provide you with a viewing angle into the Bar.   The Stock Room, Bomb Site B, is a very dangerous place for defenders to stay. There are two doors leading directly outside, and another wide door giving attackers a view of the entire site. Open all these entry points and hold the angles these openings provide. You are sure to pick up at least one kill if you are patient enough to wait for a defender to cross your path. 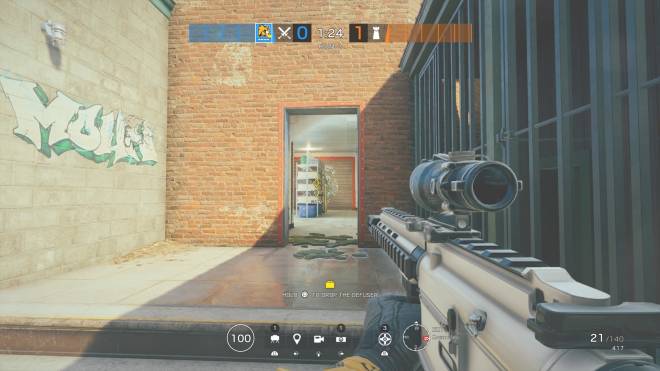 ▲ This door leads directly into Bomb Site B, and allows you to engage enemies at range. 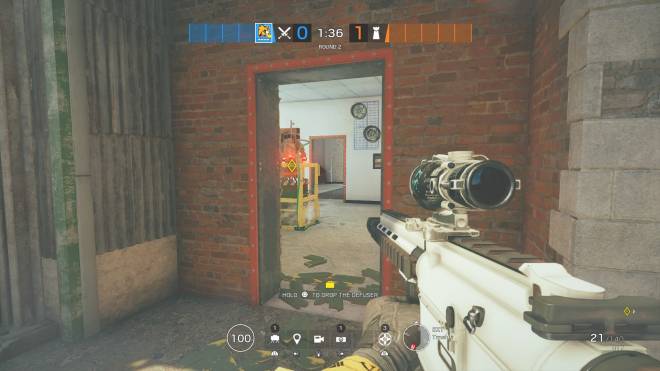 ▲ The other entry point into Bomb Site B can provide you with an alternate view of the room.   ▶ In case, the site is located at 'B Church ~ B Arsenal Room' The Church Room, Bomb Site A, is separated from Bomb Site B by a long hallway (Basement Hallway). Gaining control of this hallway will be instrumental in a successful attack on these sites. 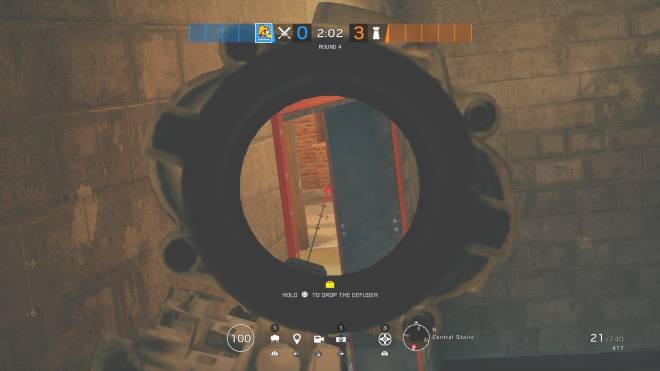 ▲ Beware this line of sight when coming down Central Stairs.   You can approach the basement using the Central Stairs, which is accessible near the Bar area. However defenders have a useful sight line of these stairs so be careful if you choose to use this route. ▲ Bomb Site A, the Memorial Room on the left side of this image is a popular position for Defenders to take up.   The Arsenal Room, Bomb Site B, is more complex. Attackers have the use of a tunnel from which they can directly access from spawn. Approach with caution if you plan on using this tunnel, defenders could be lurking around any corner of the winding tunnel. They also have the option of using a hatch directly above the bomb to provide pressure from above. ▲ This tunnel leads to Bomb Site B, however approach with caution as defenders will probably be lurking around the corner.   Attackers also have access to the Utility Room, a room leading directly to the site, which provides some cover to attackers. Being Zofia, either open one of the hatches above and engage enemies from there, or approach via the utility room and use your gadget to assist your teammates in breaching one of the bomb sites from there. 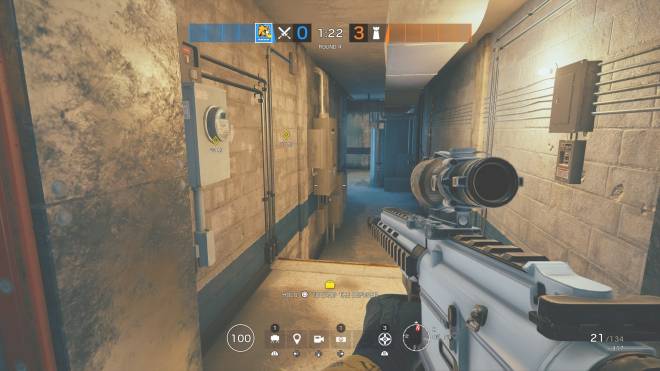 ▲ You can reach the Utility Room from the Oil Pit. ▲ Blue Stairs provides an alternate route to the Utility Room. 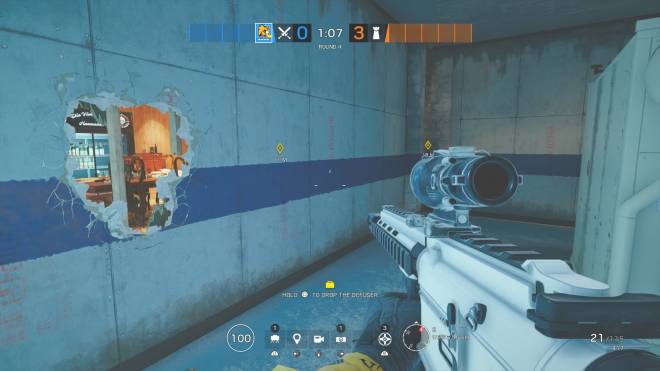 ▲ Once inside Utility Room you can create a large opening into whichever bomb site you prefer.