A guide to using Lion on Bank

■ Using Lion on Bank Bank is a very sized large map designed with large rooms. This map has three floors. Attackers will have to be careful when crossing the map’s open spaces. This map is also great for spawn peaking with many windows and doors facing and leading to the different spawn points of the attackers.   Lion is a two speed, two armor operator offering a great weapon selection with a specialization in crowd control.   His gadget, the EE-ONE-D is a device that highlights any enemies that continue to move after a three-second warning. This scanning period lasts for several seconds forcing the defending team to remain where they stand unless they want to risk revealing their location. Their exact position can also be seen through walls and obstacles, making this particular type of scanning extremely useful. Don’t expect to actually reveal the locations of many enemies when using this gadget, rather think of it as a method of holding defenders in their current position allowing you and your teammates to move more confidently throughout the map. This gadget is especially useful if you have planted the defuser at a bomb site and you know defenders must now retake that bomb site. Using your EE-ONE-D device here makes this task immensely difficult for the defending team.   Lion the choice of using three primary weapons. The first is the V308 assault rifle. This weapon has a high level of recoil making it difficult to control. This weapon also features a 50 bullet drum magazine allowing you to suppress and pre-fire with confidence. The second option is the 417 Marksman Rifle. This is a single fire weapon that features a high damage output. A drawback to this weapon is the small magazine size. Regardless, this weapon is an excellent choice for long-range duels.   His third choice of weapon is the SG-CQB Shotgun. It is difficult to recommend this weapon as you will more than likely be facing most enemies at medium to long-range, however, if you want to have fun and rush with a shotgun, don’t let me stop you!   Lion has a choice between two secondary weapons. The first option is the P9 handgun which is a typical pistol and a solid backup weapon. The second option is the more atypical LFP586 magnum revolver. This weapon offers extremely high damage output at the expense of fire rate, recoil, and reload speed.   With Lion you can also choose to use stun grenades or claymores. Select whatever suits your play style. 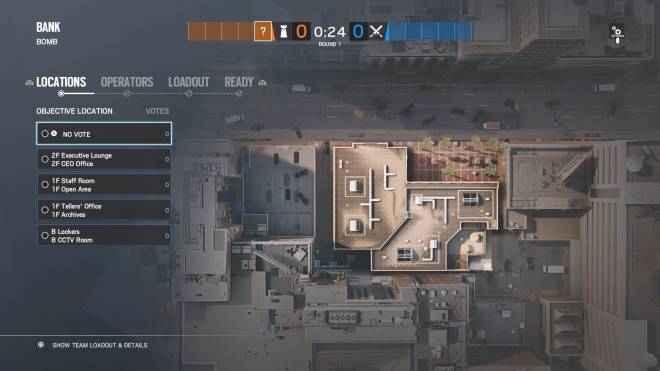 ▲ The sites you will have to attack on Bank.   ▶ In case, the site is located at '2F Executive Lounge ~ 2F CEO Office The CEO Office, Bomb Site A, features two windows and one large door connecting this site to Bomb Site B. You will have to consider many directions of attack when in this room. This room also features many breakable walls which attackers can use to open up this site and create sight lines into both bombs. Focus on trying to open these walls, you will probably need a hard breacher such as Thermite, Ace or Hibana. 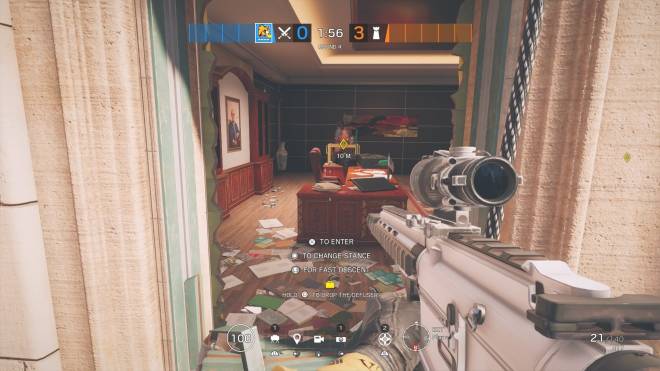 ▲ This window looks directly into Bomb Site A.   Don’t be afraid to get on the rooftop and use these angles to your advantage. You have a view of the two main walls into Bomb Site A and the hallway which runs parallel to the bomb sites. 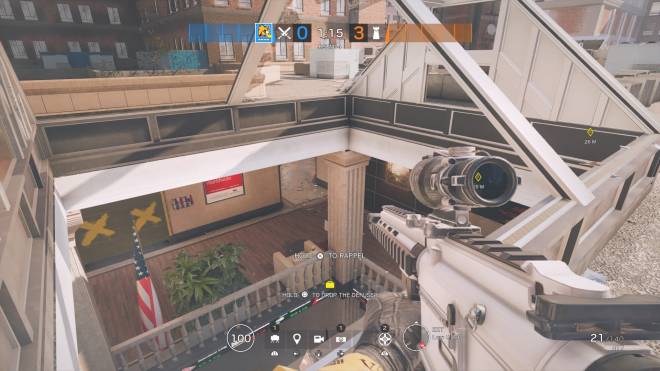 ▲ The view from the rooftop.   The Executive Lounge, Bomb Site B directly connects to Bomb Site A, almost forming one large site. This room features two large double doors. One leads to the Front Desk, the other leads to the Conference Room.   Attackers should focus on gaining control of the Hallway. This will restrict defenders from roaming throughout the floor. 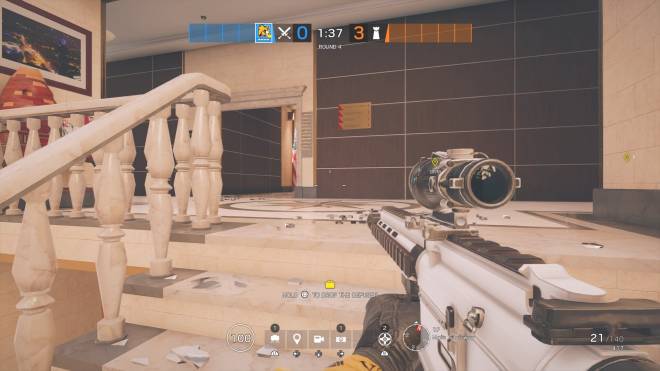 ▲ From the Main Stairway you can look directly into the Conference Room. 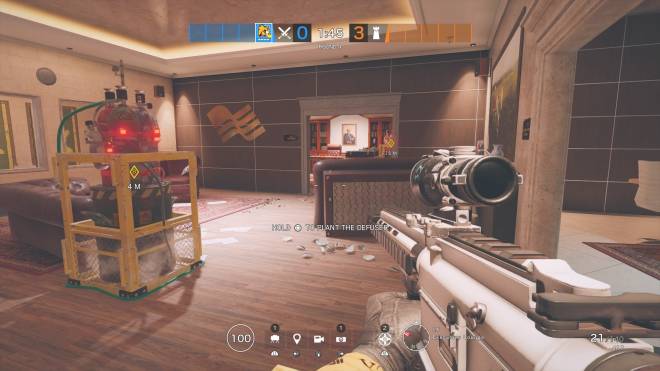 ▲ How the bomb sites connect to one another.   ▶ In case, the site is located at '1F Staff Room ~ 1F Open Area' Open Area, Bomb Site A, provides defenders with a lot of space in which to move and a lot of cover. There is one window you can access from an attacker spawn point which leads directly to Bomb Site A. Defenders will be actively defending this window though, so approach with caution. 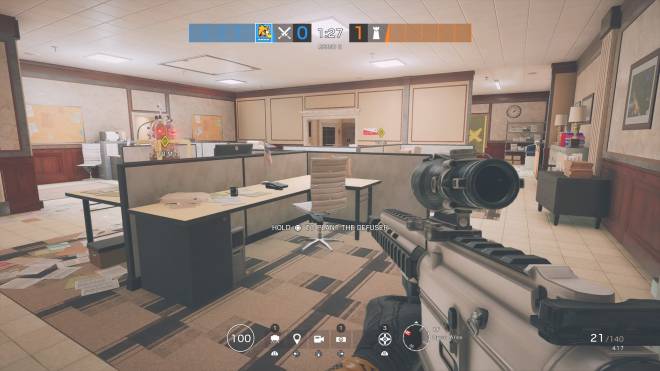 ▲ The expansive Bomb Site A. 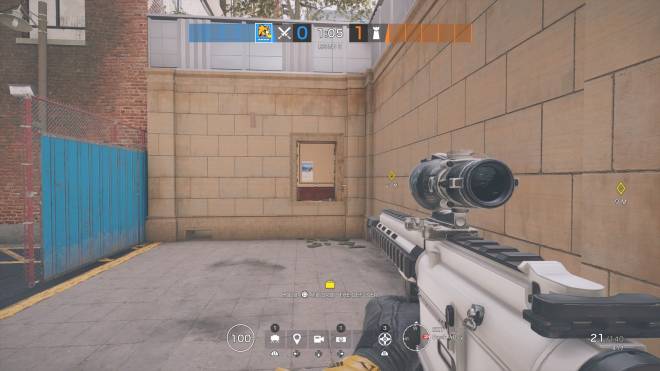 ▲ This window leads directly into Bomb Site A, it will be well defended. 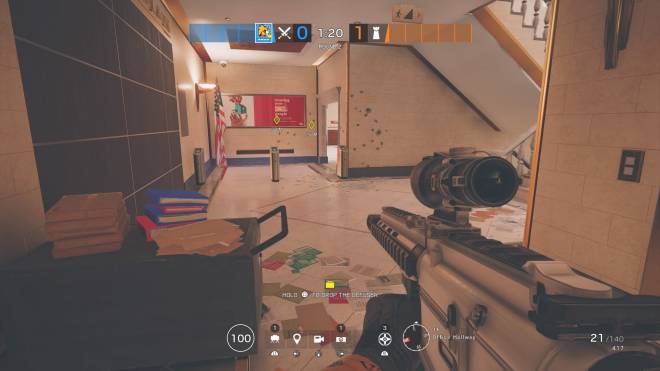 ▲ The long hallway which leads to the bomb sites.   There is also two hatches directly in this site, and another in a connecting room, Admin Office. If opened these hatches give great view points into Bomb Site A, and will allow attackers to keep up the pressure from above.   Attackers can approach the bomb sites using the Office Hallway. This wide hallway has a staircase branching off which attackers will have to be mindful of on their approach. Beware of the metal detectors at the end of this hallway, located just ahead of the doorway into Bomb Site A. This will be set off if you go through it, alerting defenders to your presence.   Staff Room, Bomb Site B, has one large door leading to the Skylight Stairwell, and many breakable walls which attackers may use to their advantage. Breaking the walls in between these two sites can create additional sight lines of which you and your teammates can use to gain the advantage in a firefight. 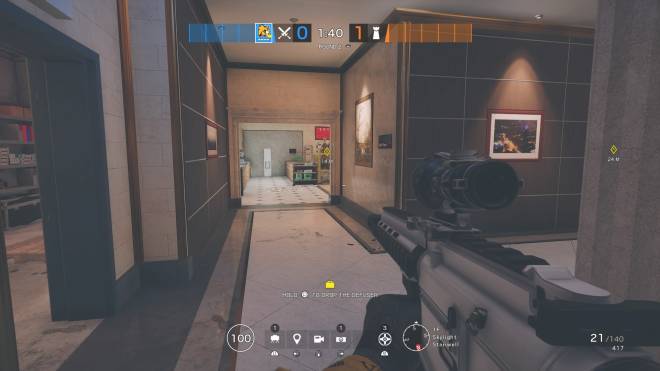 ▲ You can reach Bomb Site B by traversing Skylight Stairwell.   ▶ In case, the site is located at '1F Tellers Office ~1F Archives’ Tellers’ Office, Bomb Site A, has two doors on either side, separated by a breakable wall in the middle. It also has a breakable wall on the left. You will need four reinforcements to cover these walls. Attackers will have great access to this site as they will be coming from the Lobby. A large expansive area with lots of cover and entry points. Attackers can approach this Lobby area by using the main doors to the building. Be cautious, as there may be defenders roaming throughout this area. Once in the Lobby take out the camera on the back wall to avoid being spotted. Keep your guns trained on the two doors that lead into Bomb Site A. 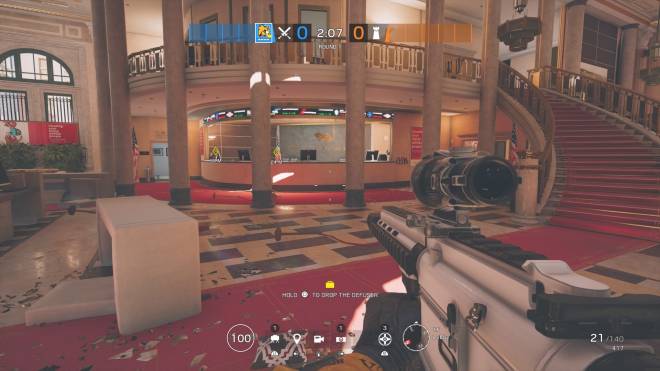 ▲ You will be very exposed trying to cross the Lobby. 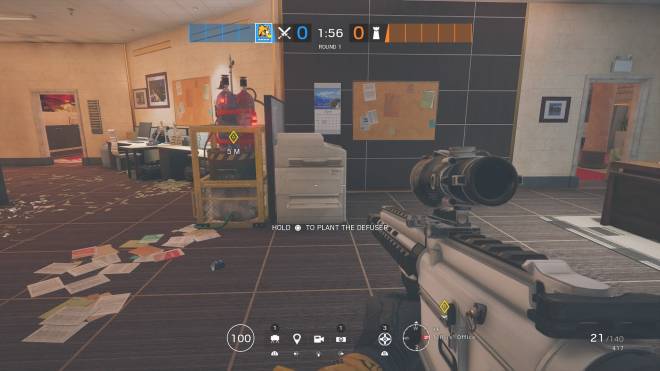 ▲ The view from inside Bomb Site A.   The Archives, Bomb Site B is connected to the Tellers’ Office by a door and a breakable wall. The Archives has one window and one door which attackers can use to apply pressure to any defenders located inside. These access points lead out to the Skylight Stairwell, which as you can tell by how many times it has been mentioned thus far, is a focal point of this map. By maintaining control of Skylight Stairwell attackers should be able to peak into Bomb Site B and take out any defenders unfortunate enough to be inside. 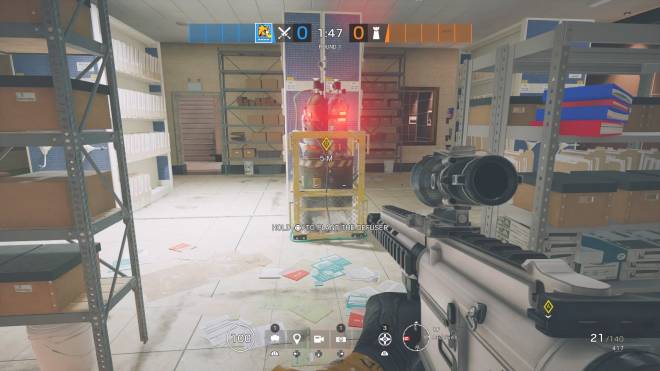 ▲ The door and mid level window in Bomb Site B.   Being Lion, I would try to use your gadget at key moments, such as when you and your team are close to the bomb sites and are planning to breach or maybe when you have already planting the defuser, forcing defenders to rush back and try to retake the site.   ▶ In case, the site is located at 'B Lockers ~ B CCTV Room These bomb sites are located in the basement, which has many entry points for attackers to utilize. CCTV Room, Bomb Site A, is small and provides only minimal cover. Attackers can approach from two main directions. The first is the Server Room. The Server Room has a tunnel that leads directly to a spawn point for the attacking team, making it a popular point of entry. In Server Room, there is also a door leading to a staircase, which may be used by attackers as an alternate entry point. Working your way through the Server room can be difficult. Make use of any stun or smoke grenades you may have to cover your approach. 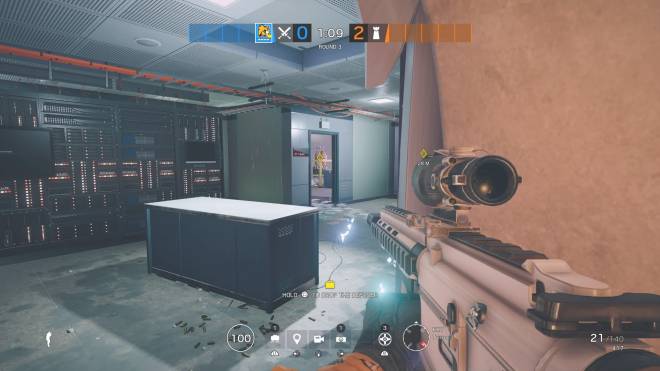 ▲ The view of Server room from the tunnel.   Lockers of Bomb Site B, is an even smaller room. The main entry point to this room is from the Garage. Attackers can access the Garage from a nearby spawn point, and this Garage directly faces Bomb Site B. Expect a long range duel with defenders. If you are able to control Garage you can flank behind any attackers that may currently be located in Bomb Site A. 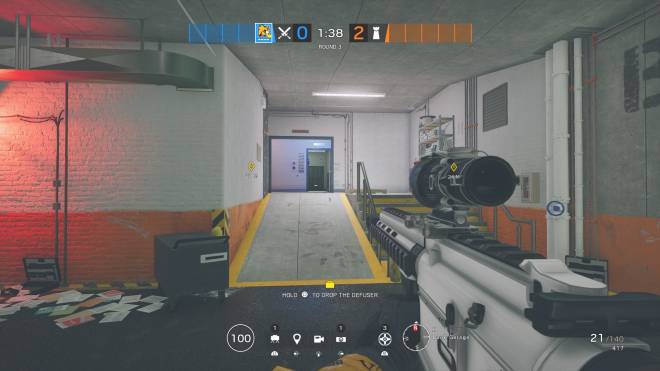 ▲ This will be your view of the bomb site if you choose to come through the garage. 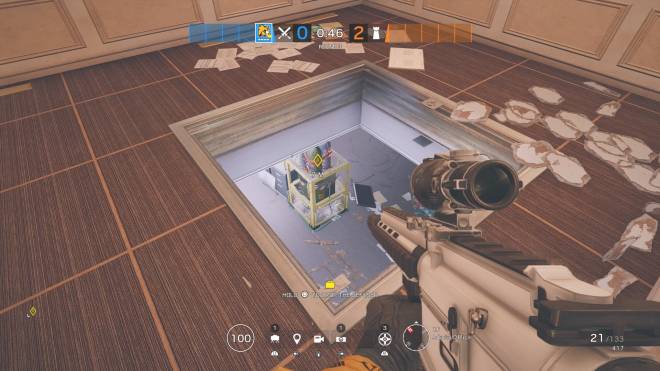 ▲ You can also open this hatch in Admin Office. This will allow you to view Bomb Site A directly.     The final point of entry is Main Stairway. This goes from the basement all the way to the top floor. It provides defenders an opportunity to roam, and provides attackers with another entry point to the basement. 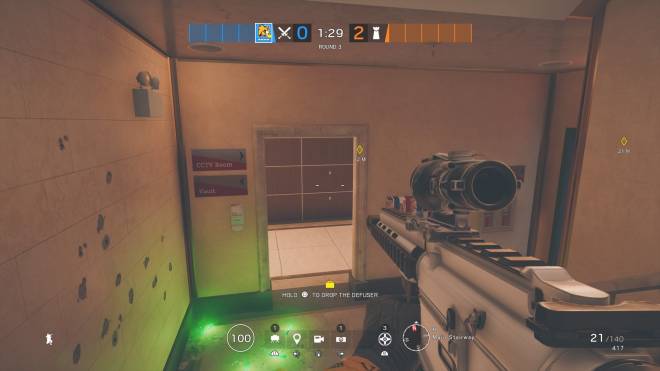 ▲ The Main Stairway can be used to reach the basement.