A guide to using Zofia on Kanal

■ Using Zofia on Kanal Kanal features two separate buildings, both with multiple floors of elevation. Kanal can be an excellent map for roaming, as attackers try to rappel up one building, defenders can be in the opposite building shooting them from a multitude of windows. Beware attacking on this map as it allows defenders to spawn peek most of the spawn locations.   Zofia is a two speed, two armor operator and proves to be a useful pick for most situations. Her gadget The KS79 Lifeline, is a grenade launcher that comes loaded with two impact grenades and two stun grenades (similar to Ela’s mines). This allows her to breach walls and suppress enemies behind those walls seamlessly, making her an excellent choice if you’re trying to lead the push to an objective. Zofia also has a secondary ability. When Zofia is downed, she can choose to Withstand, allowing her to pick herself up but with only 5% of her baseline health.   Zofia has a choice of two primary weapons, an assault rifle and a light machine gun. The M762 assault rifle is an excellent choice offering a high DPS, a decent rate of fire, and minimal recoil. It is hard to find any major faults with this weapon choice. The LMG-E is a light machine gun that offers good damage output with a large clip size that you would expect of an LMG, however, the recoil of this weapon is a bit more sporadic when compared to the assault rifle option.   The only choice of secondary is the RG15 pistol, which comes equipped with a red dot sight by default. This pistol handles as expected, similarly to most other handguns in the game.   Zofia’s ideal secondary gadget is the claymore, as her breaching capabilities are already covered by her grenade launcher. ▲ Assist your hard breacher in attempting to get this door opened, this will help you and your teammates massively.   Another aspect to consider with this site is the long hallway in the which lead to a window and a staircase, of which attackers can use to gain access to the room. You can reach this window by rappelling to the rooftop, however beware of defenders peaking out from the various windows and doorways which lead to the roof. ▲ How the bombs connect to one another. 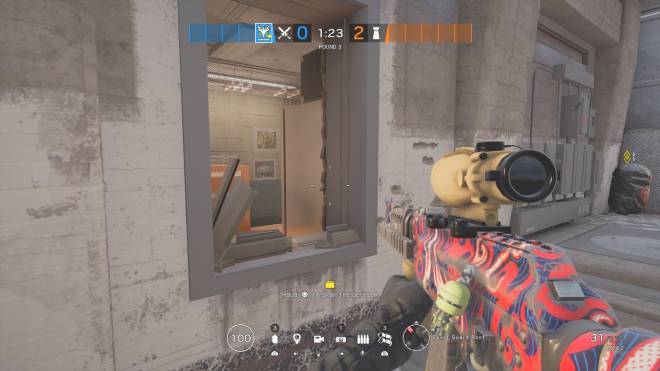 ▲ The view of Bomb Site B from Green Stairs.   ▶ In case the site is located at '1F Security ~ 1F Map Room' Map Room, Bomb Site A, is a small room which has a door leading to the main hallway. The other door in this room leads to an adjacent room which defenders may be taking cover in. Attackers should look to gain control of the hallway and associated stairwell between the bomb sites. In doing so, you will essentially cut off the defenders from one another, and possibly pick up some kills, as defenders often use this hallway to traverse the first floor. ▲ From this window you can create an angle into both bomb sites.   Holding sight lines into the hallway and stairways can be instrumental in mounting a successful attack of these bomb sites.   ▶ In case, the site is located at '1F Coast Guard Meeting Room ~ 1F Lounge' The key to successfully attacking these sites is gaining control of the Radio Room Hallway. This is a long hallway which runs in between the bomb sites. Holding a sight line of this area makes passing between the sites difficult for defenders. One must expect an engagement each time they enter this hallway. 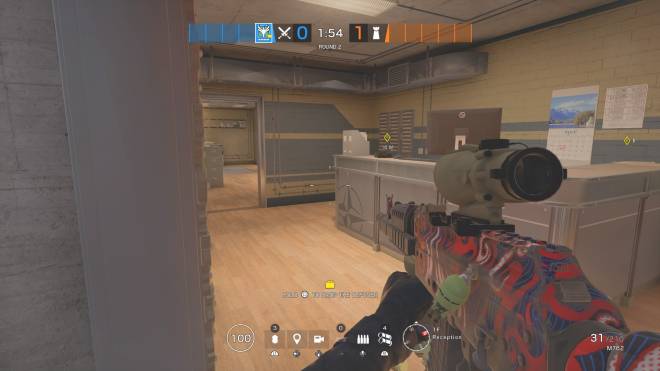 ▲ Notice the proximity of this entrance leading to outside to Bomb Site A. ▲ The view from inside Bomb Site A.   The room adjacent to this one is called Archives. A long room with sight lines overlooking the main entrance, of which attackers can spawn next to. Defenders may be taking cover in this area so be cautious when deciding to enter the building using the main entrance.   At the other end of the hallway is the Lounge, Bomb Site B. This site is considerably smaller, it has a doorway leading to the hall, and two windows that can be breached and rappelled through by attackers. Opening both windows can give the defenders a lot to think about, however rappelling and hanging at windows can be quite risky. 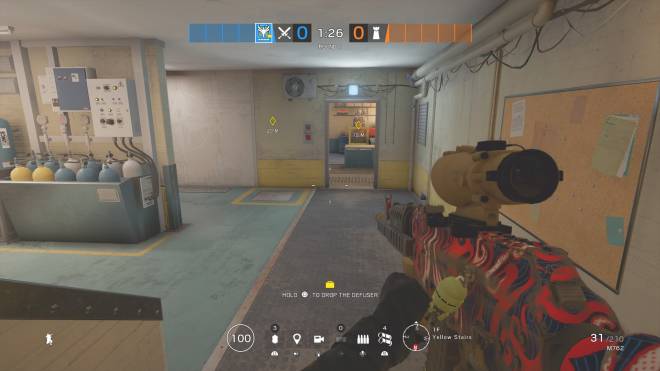