A guide to using Zofia on Chalet

■ Using Zofia on Chalet Chalet is a medium sized map with three floors. It provides defenders great opportunities to roam thanks to it’s three floors, with three separate staircases. This map is also a spawn peeker’s delight with lots of windows to peek from, and also doors to burst out from to grab some quick kills.   Zofia is a two speed, two armor operator and proves to be a useful pick for most situations. Her gadget The KS79 Lifeline, is a grenade launcher that comes loaded with two impact grenades and two stun grenades (similar to Ela’s mines). This allows her to breach walls and suppress enemies behind those walls seamlessly, making her an excellent choice if you’re trying to lead the push to an objective. Zofia also has a secondary ability. When Zofia is downed, she can choose to Withstand, allowing her to pick herself up but with only 5% of her baseline health.   Zofia has a choice of two primary weapons, an assault rifle and a light machine gun. The M762 assault rifle is an excellent choice offering a high DPS, a decent rate of fire, and minimal recoil. It is hard to find any major faults with this weapon choice. The LMG-E is a light machine gun that offers good damage output with a large clip size that you would expect of an LMG, however, the recoil of this weapon is a bit more sporadic when compared to the assault rifle option.   The only choice of secondary is the RG15 pistol, which comes equipped with a red dot sight by default. This pistol handles as expected, similarly to most other handguns in the game.   Zofia’s ideal secondary gadget is the claymore, as her breaching capabilities are already covered by her grenade launcher. 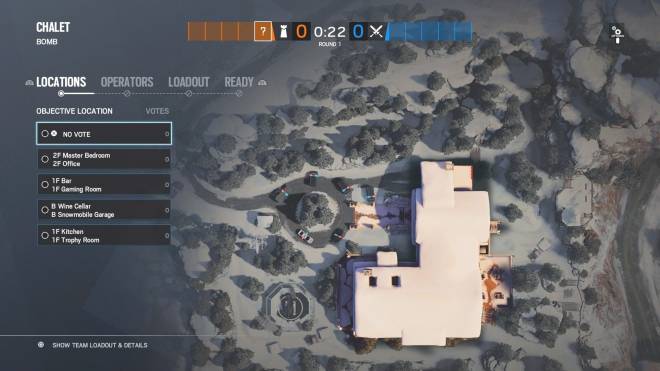 ▲ The sites you will have to attack on Chalet   ▶ In case, the site is located at '2F Master Bedroom ~ 2F Office' The site of 2F Master Bedroom ~ 2F Office, provides a lot of entry points for attackers, making this one of the easier bomb sites to attack in the game. The Office, Bomb Site A, has a window and a door which leads to a walkway outside. This threat is difficult to defend against as, if both of these are opened, attackers have a view of the entirety of Bomb Site A. The main concern for attackers should be their approach. Try not to get spawn peaked or killed on route to the ladders. Once climbing a ladder, or rappelling, you will be very exposed. If you avoid getting killed while attempting to get into position, this site should not prove too difficult. Open up the multitude of doors and windows and proceed to hold these angles, eliminating any defenders unfortunate enough to cross your path. 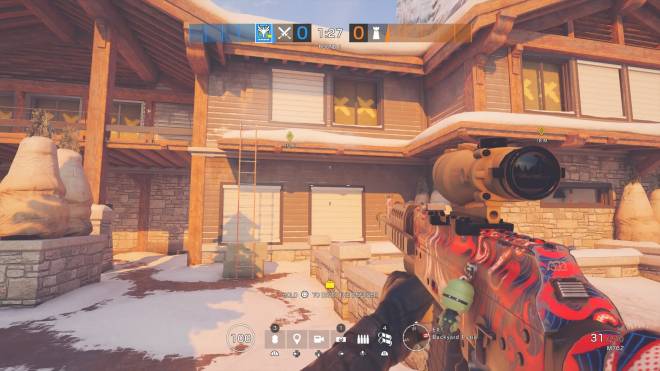 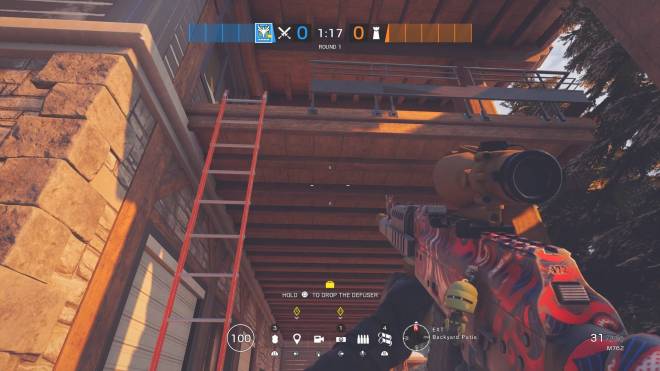 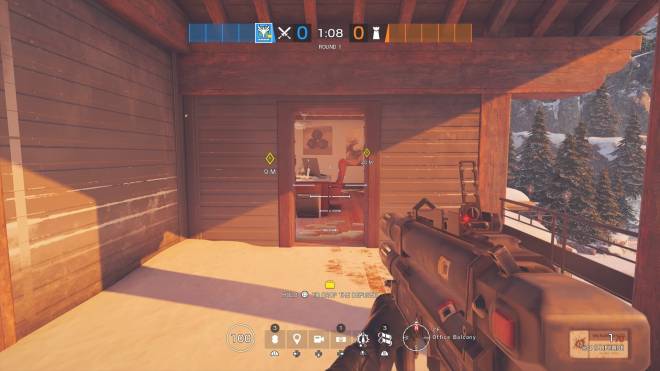 ▲ This door leads directly to Bomb Site A. 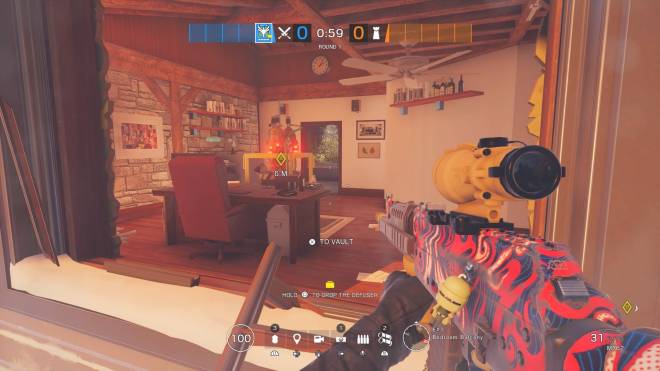 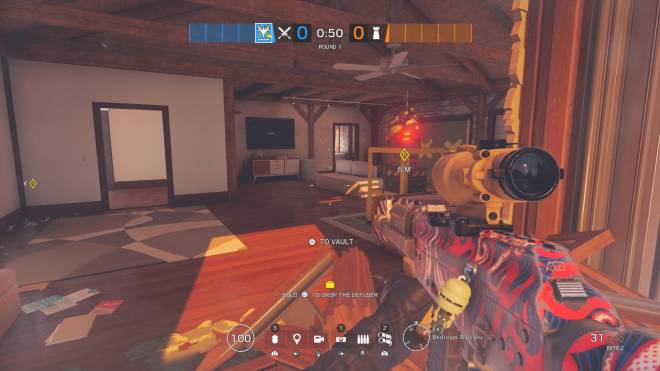 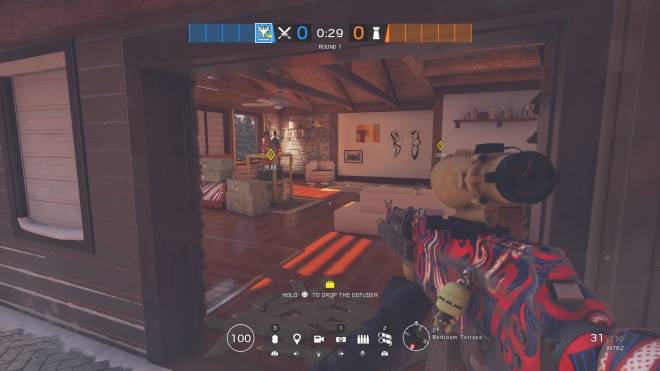 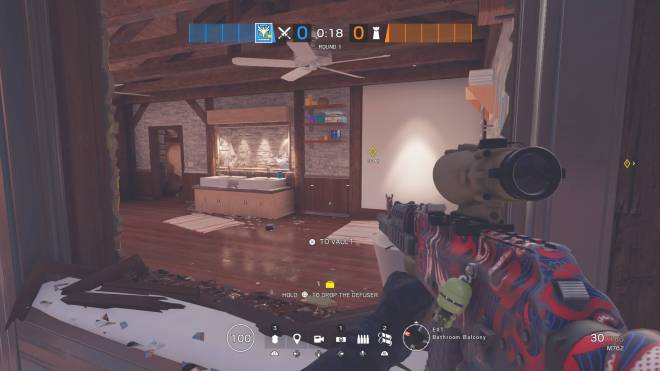 ▲ The bathroom adjacent to Bomb Site B.   When attacking these bomb sites, maintain the sight lines provided to you by opening up the windows in the sites. You should be able to pick up at least one or two kills from this position. Hold these angles for as long as possible, waiting for your opportunity to enter one of the sites and planting the defuser.   ▶ In case, the site is located at '1F Bar ~ 1F Gaming Room' The 1F Bar ~ 1F Gaming Room sites can become very exposed. The Gaming Room, or Bomb Site A is very difficult to hold. Attackers have the use of a doorway and two windows, when opened, provide you and your teammates with a full view of the bomb site. Open these access points and quickly peek into the site, taking out any defenders that may be anchored there. Defenders may have opened the breakable wall between two bomb sites which you must be mindful of. 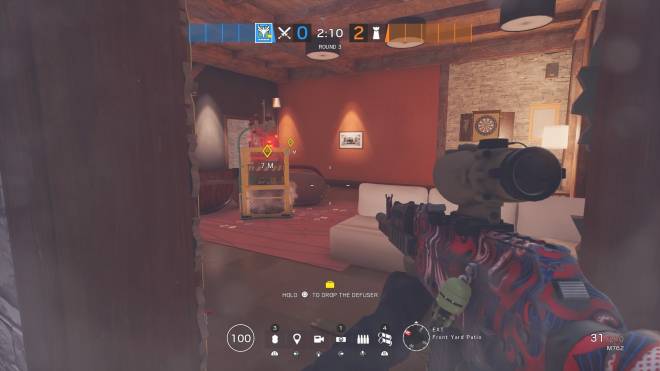 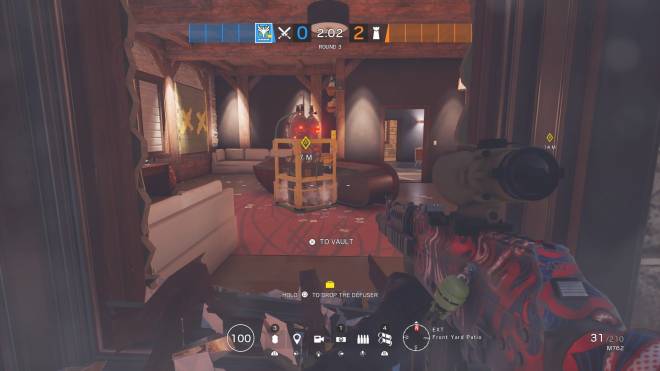 ▲ This window provides an alternate view of Bomb Site A.   In Bar, Bomb Site B, you and your teammates will have an excellent opportunity to engage the defenders at range. There is a large door into this site which will attackers a great view into the room You should also try to breach the breakable wall on the same side as this door. When opened, it will expose any defenders that may be taking cover behind the bar. I would engage enemies at range using your M&62 assault rifle or LMG-E. 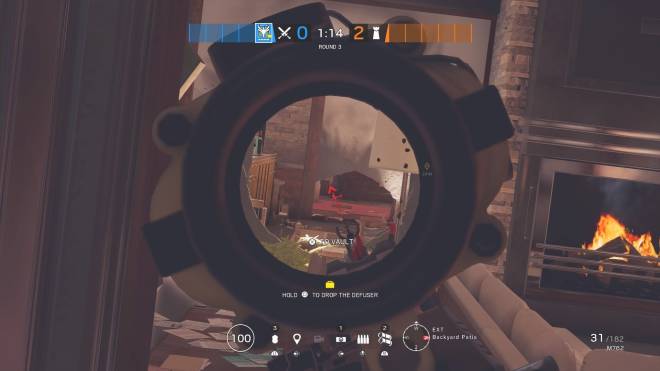 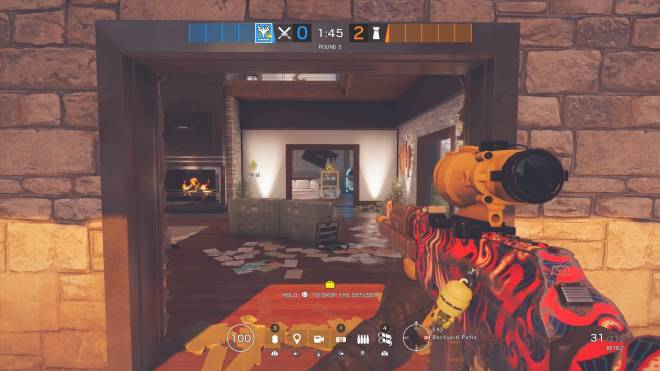 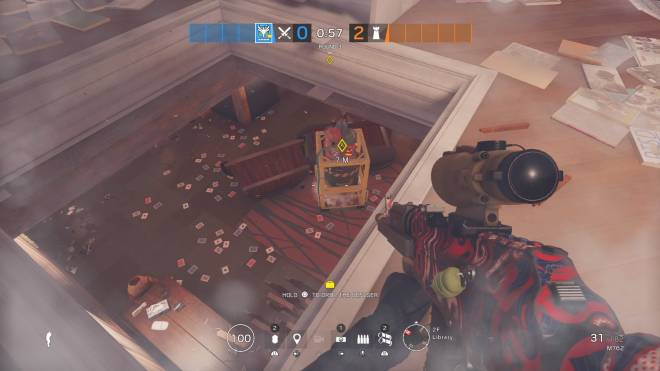 ▲ You can also open this hatch above Bomb Site B. From here you can also use Zofia’s gadget to full effect.   ▶ In case, the site is located at '1F Kitchen ~ 1F Trophy Room' When attacking the 1F Kitchen ~ 1F Trophy Room there are some key entry points that you and your teammates can use to your full advantage. In Trophy room, Bomb Site B, there is a window that leads directly outside. This window is at ground level, meaning attackers can engage defenders at range from this position. 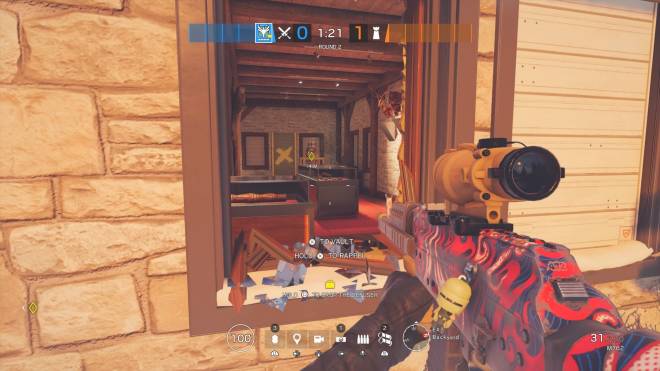 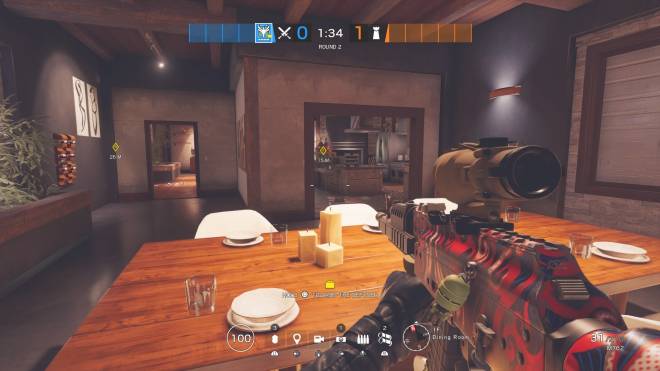 ▲ The hallway between the bombs. 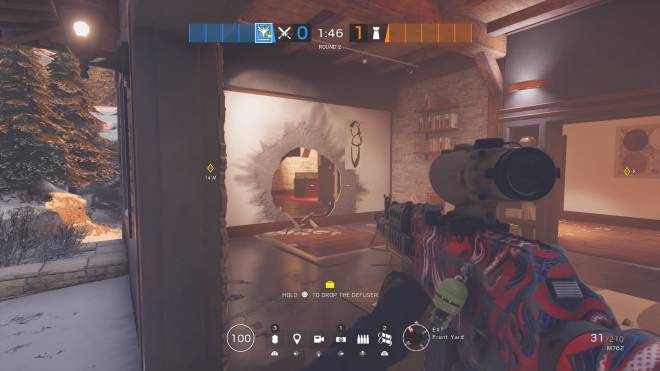 ▲ This door will put you in close proximity to both bomb sites, expect it to be well defended. From here you can use your gadget to breach the wall if it is not reinforced.   In Kitchen, Bomb Site A, attackers have a great opportunity to overwhelm defenders through two different means. The first is the narrow window on the right side of the site. Attackers can both shoot through this window and throw their respective gadgets and projectiles. There is also a hatch in this site directly above the bomb, when attackers have access to both the hatch and the narrow window it won’t take long before defenders are picked off. 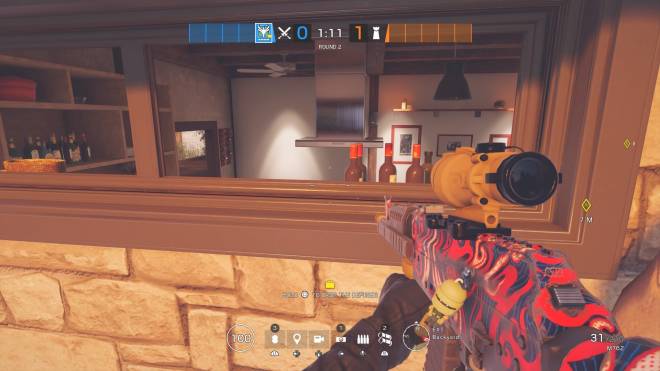 ▲ This window provides the attackers with a slight view of the Bomb Site. It is very useful for throwing grenades or gadgets. 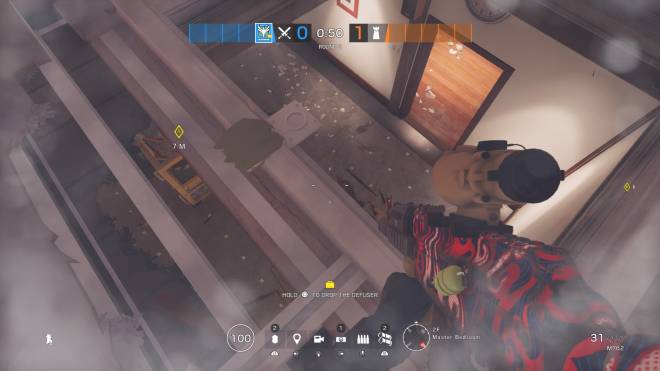 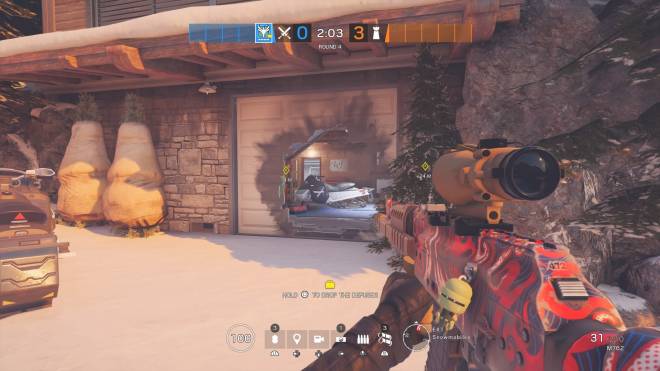 ▲ The Snowmobile Garage, hopefully your team has a hard breacher that can assist in opening up this garage.   In Wine Cellar, Bomb Site A, there are two main points of entry. The door at the back of the room, as well as a hatch. This site opens out so a long hallway with a staircase leading up to the first floor. Attackers can get access to this long hallway by opening a door which leads to another garage area. 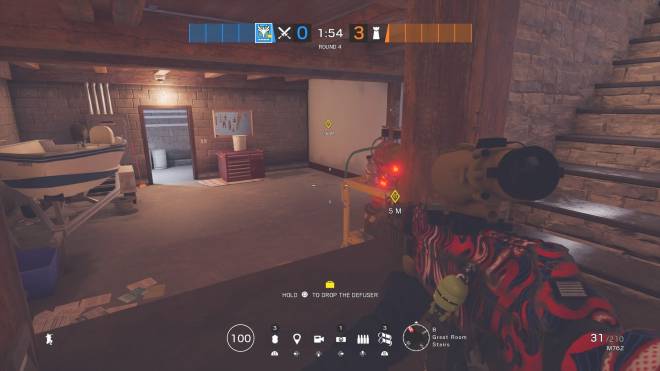 ▲ The view of Bomb Site B when approaching from the Great Room Stairs. 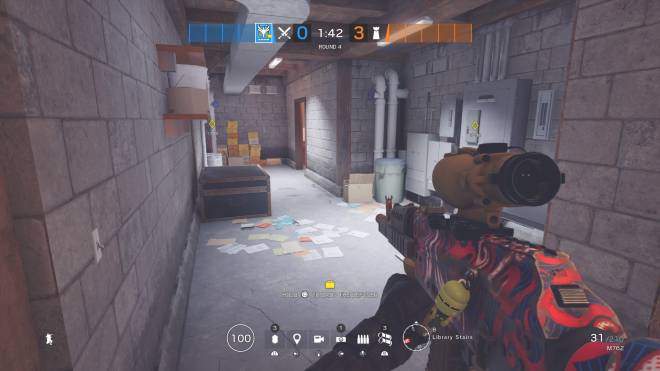 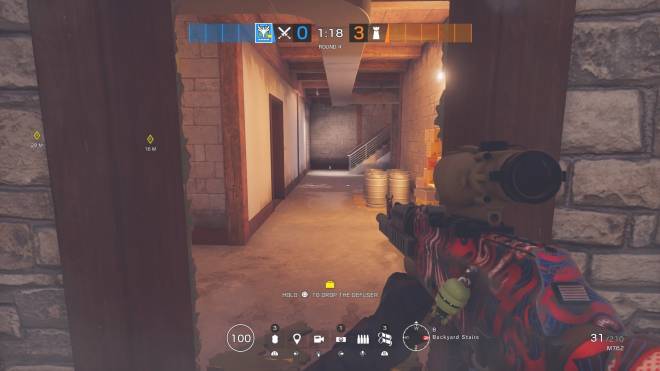 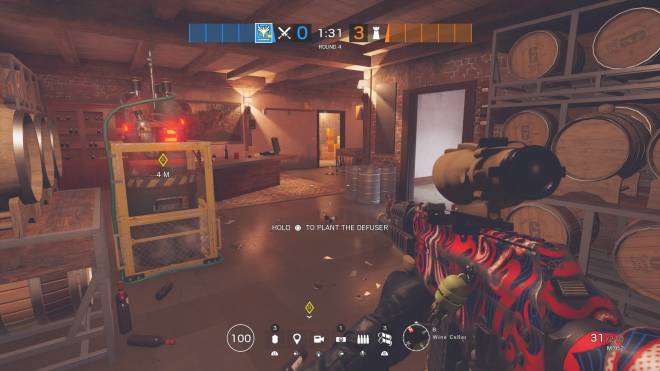 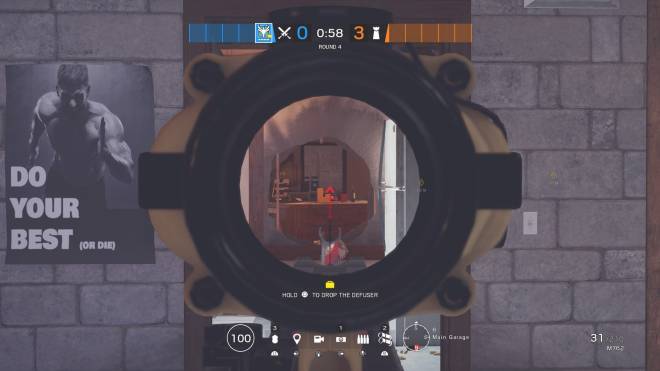 ▲ From the Main Garage, you have a sight line of Bomb Site A., if you can open up the wall that is.