Guide on playing 'Melusi' in 'Consulate'

■ Consulate - Melusi guide   Consulate is a map with basement, 1F and 2F. Each floor isn’t that wide, but if you combine all three floor, it’s one of the bigger maps. Each floor has stairs, so defenders should utilize roamers to catch the enemy from behind.   There are windows around the map so the defenders will try to spawnkill and attackers will go for rappel plays. Attackers should make sure they don’t see any open windows when trying to enter the building and the defenders should make sure they position themselves, so they don’t get shot from outside the window.   There is one objective location on each floor and a weird one where there’s a bombsite on basement and 1F. This weird one forces the defenders to defend both 1F and basement so it’s not exactly the defenders’ favorite place to vote for. 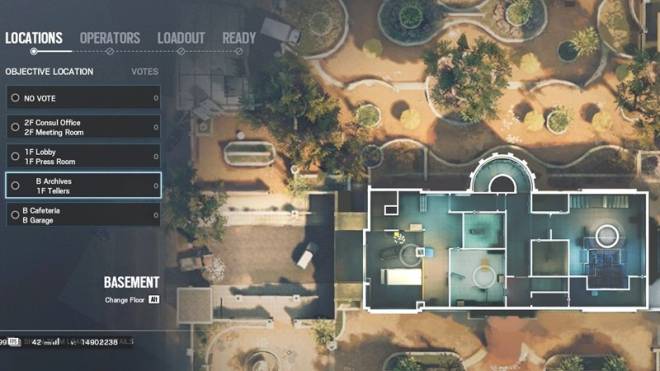 ▲ The one where there are bombsites on both 1F, and basement is the hardest one to defend   Melusi is an operator that was added during the Y5S2 Steel Wave. She is a 3 speed 1 armor operator, with the Banshee Sonic Defense, which makes a unique noise to slow down the attackers’ speed in a certain radius. The Banshee Sonic Defense is a bullet proof gadget, and can be destroyed with explosives or mele attack, but you can slower as you get closer to it, so it’s hard to destroy it with a melee attack, forcing the use of explosives.   Melusi has the MP5 SMG and the Super 90 Shotgun as her primary weapon. Usually the MP5 SMG is chosen, but she can’t use a magnification scope with her MP5 unlike other operators. She can take the impact grenade if she needs to remodel, or the nitro cell if you want to protect your Banshee Sonic Defense. 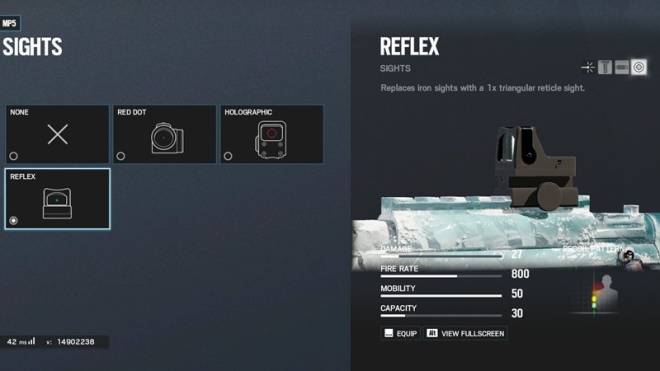 ▲ It’s a shame she can’t use a magnification scope on her MP5 unlike Rook or Doc   ▣If '2F Consul Office ~ 2F Meeting Room' is the site Bombsite is on the top floor, meaning attackers will try to come in through the windows all around the building or come up the stairs. The defenders, should know this and divide the team and place people in different routes where you expect the attackers to come.   Melusi can act as an anchor where she places here Banshee Sonic Defense and lurk around it, but she’s a 3 speed operator so she can be a roamer as well. In this area she’s better at facing enemies coming up the stairs instead of coming from windows, so she should place her BSD at Exit Stairs, Main Stairs, and Service Stairs. While the attackers are stalled here Melusi can be a roamer and get them from behind. 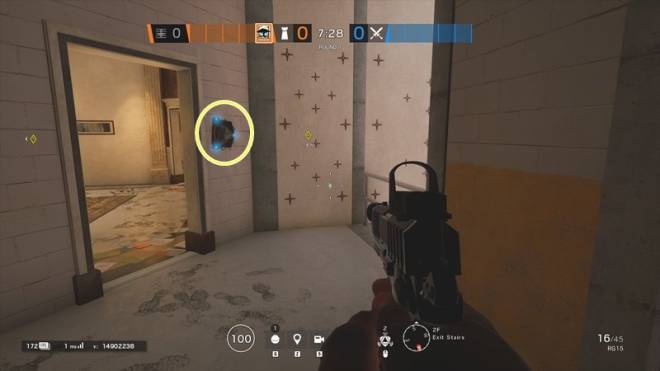 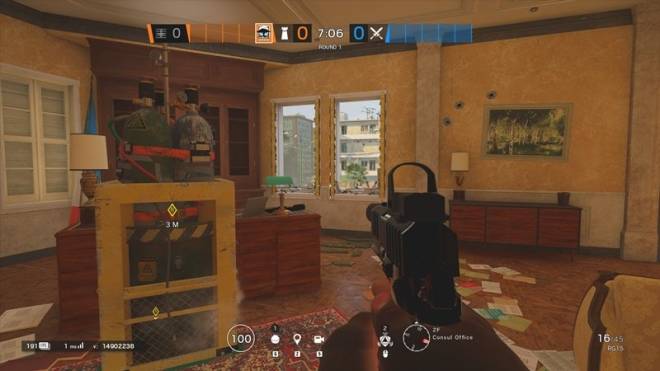 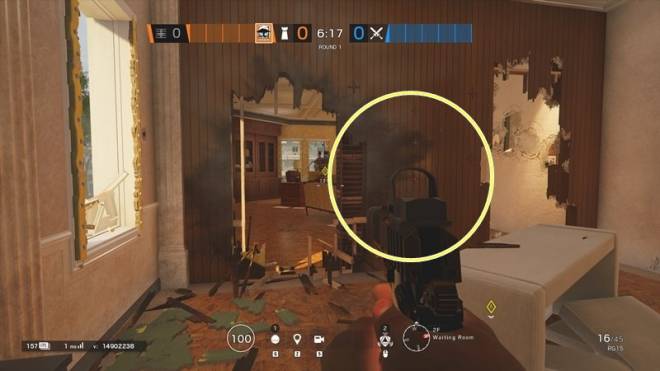 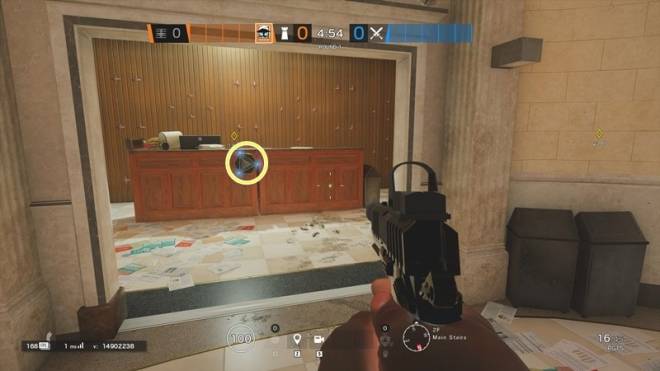 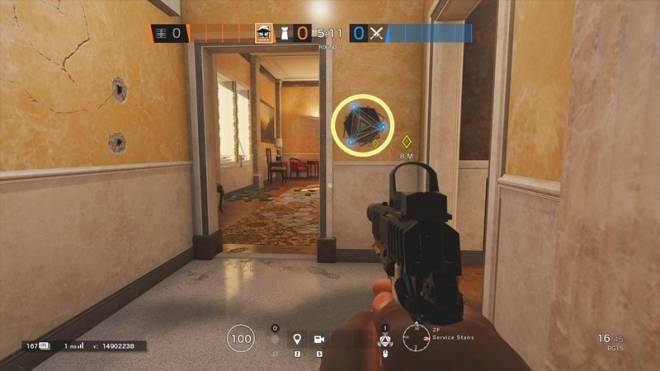 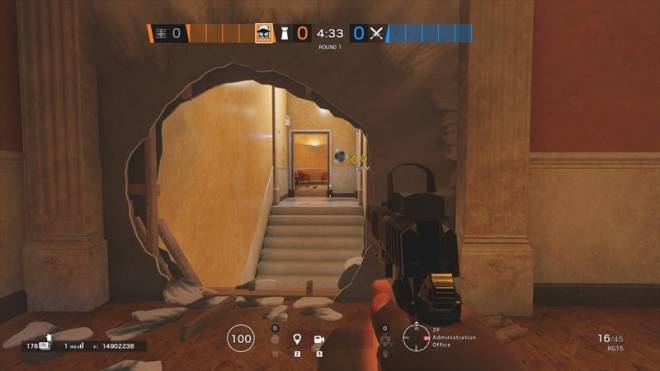 ▲ You can defend both Service Stairs and Meeting Room from Administration Office if you open this wall   ▣If '1F Lobby ~ 1F Press Room' is the site   Bombsite is on the 1F, and it’s severely exposed to the outside. The attackers can get a clear view on the entire bombsite just by breaking a barricade or a window. The Lobby is especially great for the attackers, so the defenders usually place themselves in the Public Bathroom or look down from 2F Meeting Room.   If you use the BSD, you should use it at the 1F Lobby or Exit Stairs to stall the attackers entering the building. Place it so that you force them to use their explosives instead of melee. It’s better if you have a Jager and his ADS around. 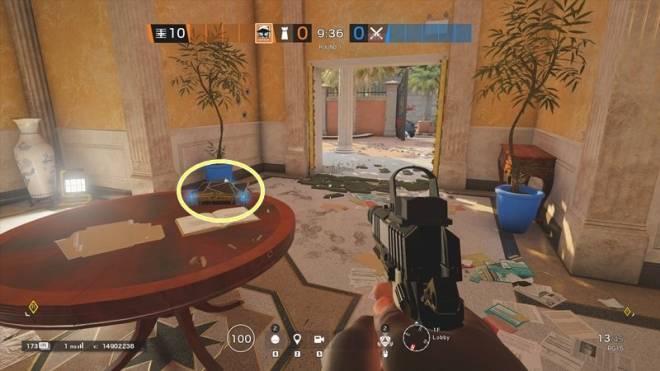 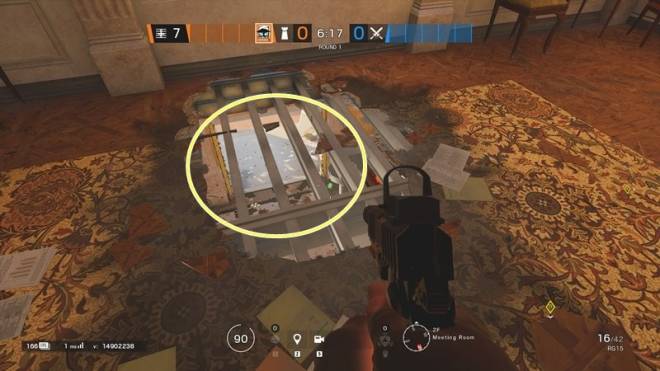 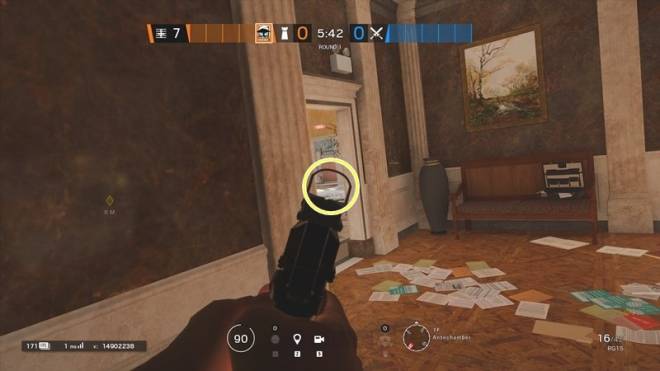 ▲ It’s hard to defend in the Lobby, so it’s better to do so at Antechamber or Public Bathroom 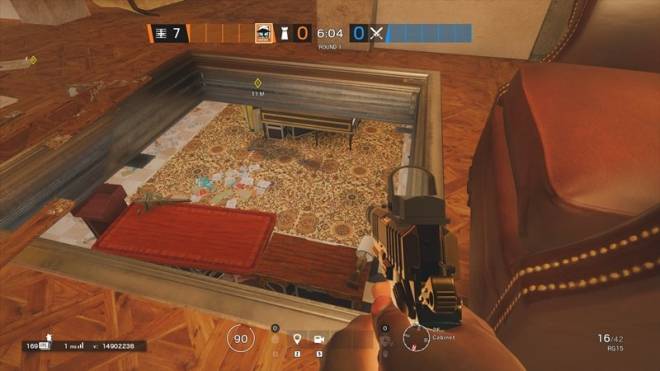 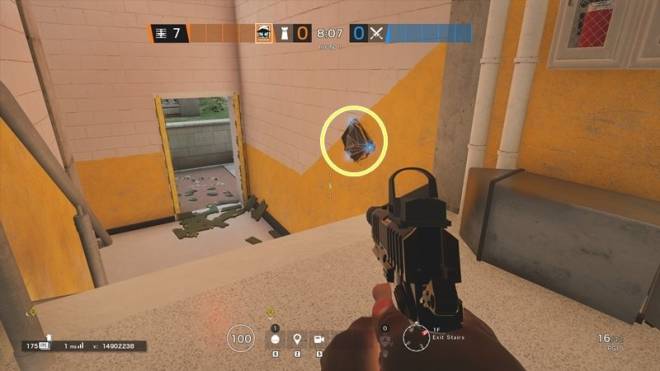 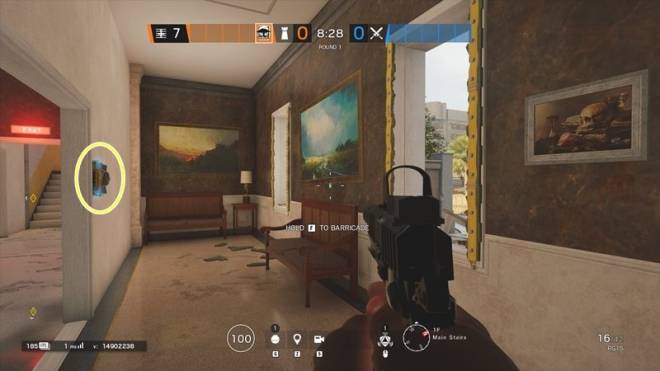 ▲ BSD location to stop attackers coming through West Corridor window     ▣ If 'B Archives ~ 1F Tellers' is the site   As mentioned before, the bombsites are placed one on basement and 1F, so you have to defend both floors. The Bombsite isn’t that far apart since it’s Archives, which is right below Tellers, but you have to divide your team which is the real problem. So if Melusi can use her BSD to stall the attackers pushing in, it would be helpful.   Sometimes, the attackers rappels and comes through the 2F Administration Office to open the hatch and come to 1F Tellers. If this is the case, it’s going to hard to defend Tellers. You can counter this by opening the Administration Office’s hatch, and catch the attackers pushing in through Visa Office, so having more than one person on the 2F is recommended. 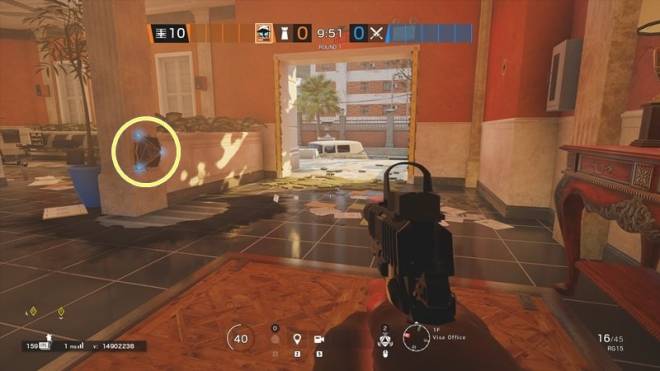 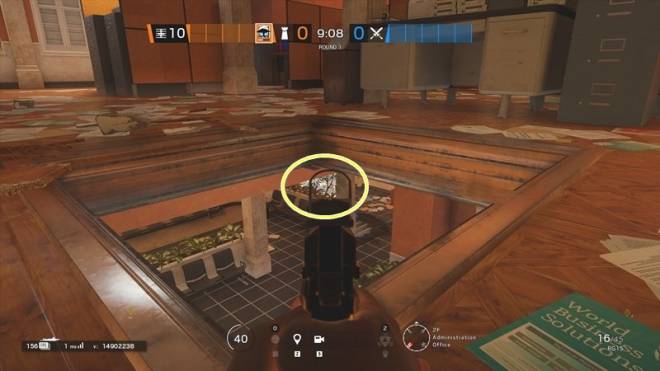 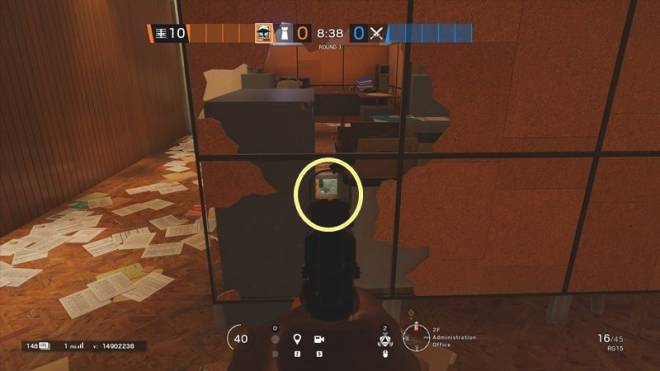 ▲ If you shoot the desk next to the hatch, you get an angle on Visa Office window 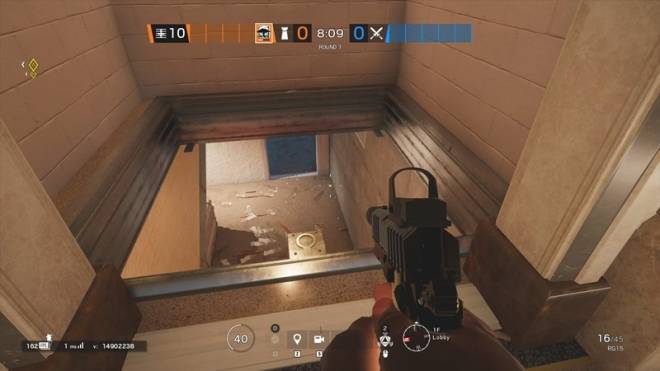 ▲ If opened from the Lobby, this hatch leads to Archives Corridor so be careful of this route 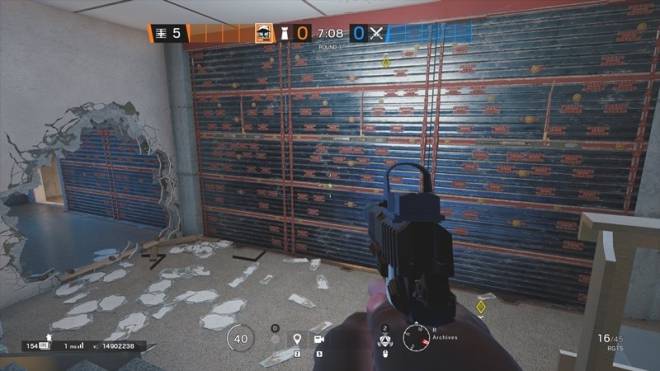 ▲ Defense setup for basement Archives. You can use Black Mirror here. 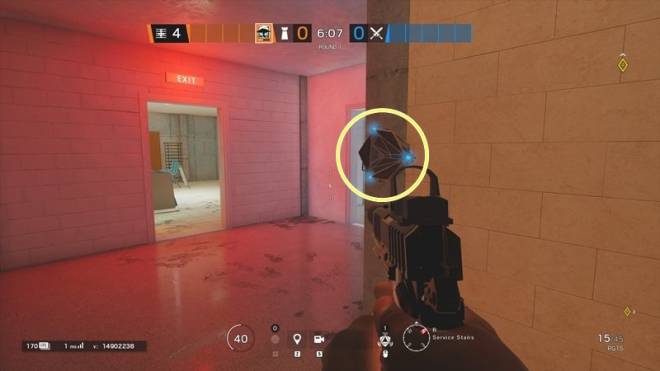 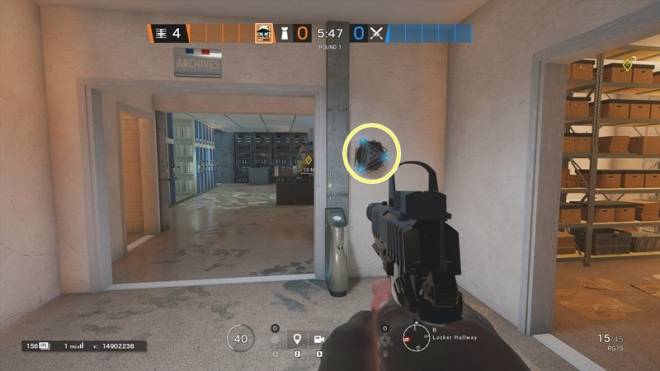 ▲ BSD to slow down attackers pushing from Locker hallway to Archives   ▣If 'B Cafeteria ~ B Garage' is the site   There are three walls to the outside of the Garage, so it’s important that these walls don’t get breached easily. Bandit or Kaid is often used here for a Bandit trick. However, if the attackers hold an angle from Exit Stairs or do a vertical play from 1F Press Room, it’s hard to defend this area forever, so setup the bombsite with this in mind.   Like 1F Press Room, Melusi can anchor here with her BSD. Attackers not being able to frelly come in here means longer the walls at Garage stays. Using the BSD and Cafeteria or the Main Stairs to stall the attackers coming from the other side is also viable. 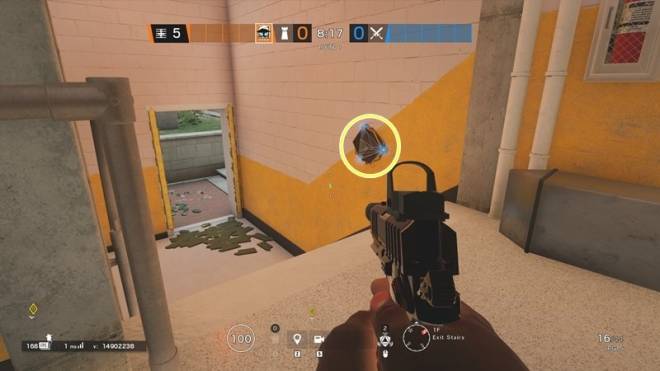 ▲ Place BSD at Emergency Exit and stall the attackers 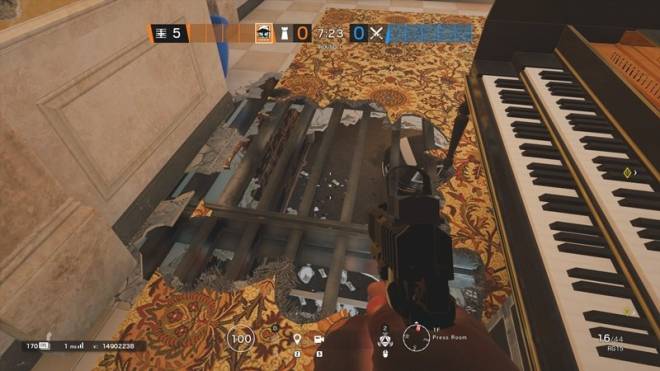 ▲ Attackers may do a vertical play from Press Room, so be careful 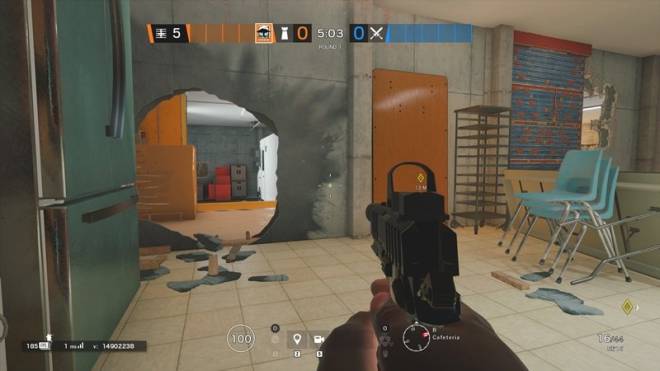 ▲ It’s useful to have a rotation from cafeteria to Garage 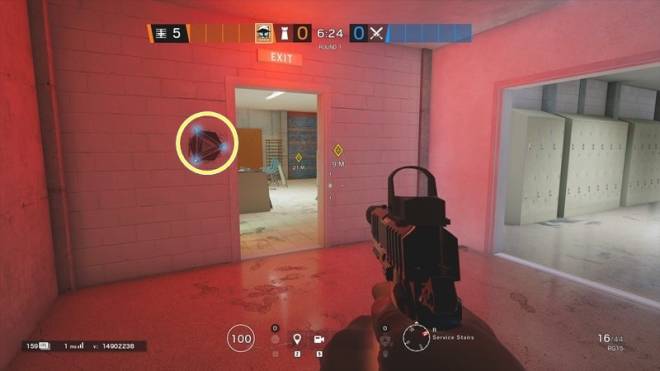