Guide on playing 'Blackbeard' in 'Themepark'

■ Theme Park - Blackbeard Guide   Theme Park is a 2 story building map. There windows all around the building, so the attackers can consider starting their attack from these windows. However, the windows are also useful to the defenders because they can try spawnkilling or do a run out play. The inside of the building is very complex and you can easily be ambushed by the defenders’ roamers, so be careful.   There are two objective locations on each floor. The Armory ~ Throne Room has limited number of entrances and it’s hard to do a vertical play, so unless you bring a hard breacher to make a new angle, it’s very hard to win here. This is why the defenders often vote for this area even though it is on the 1F. 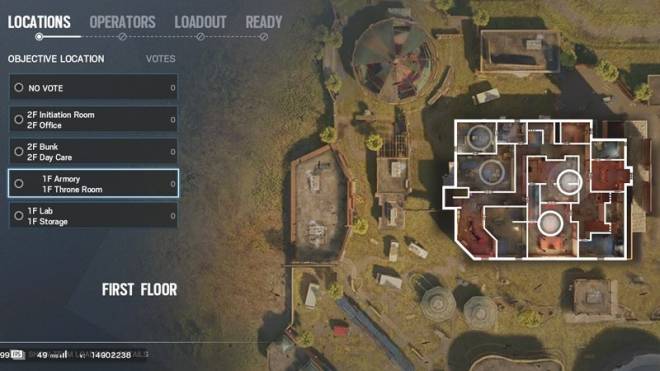 ▲ The 1F Armory ~ Throne Room is infamous for being favored towards the defenders   Blackbeard can attach a rifle shield on the front part of his primary weapon, and his ability is made for quarrels, making it powerful in 1v1 situations. The rifle shield has 50 HP, so it can block one or two shots from the defenders. This means you can block up to two headshots, which is huge. This ability makes Blackbeard extremely strong in situations where he can fight while covering his body.   As a consequence, Blackbeard’s primary weapon isn’t exactly the best weapon. The MK17 CQB assault rifle has a high damage of 49, but has a low fire rate of 585, and its’ capacity is only 20. Not only that, after the Shadow Legacy season’s scope rework, it can’t use the ACOG scope anymore and can only use the Scope 1.5x, making people choose the SR-25 DMR more often. 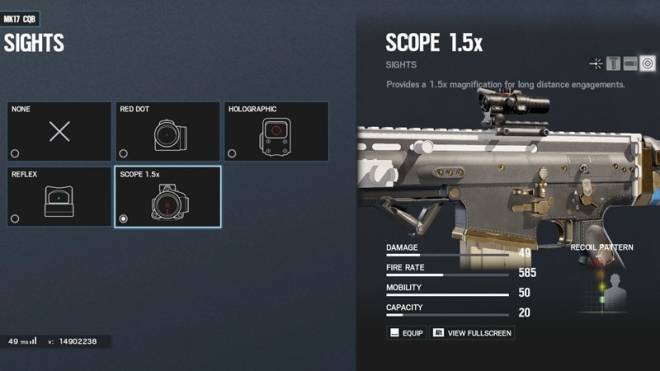 ▲ MK17 CQB can only use the Scope 1.5x or use one without magnification after Shadow Legacy 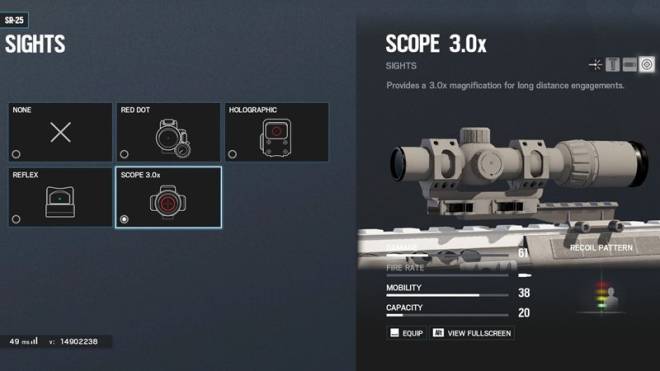 ▲ SR-25 on the other hand can use Scope 3.0x because it’s a DMR   ▣ If '2F Initiation Room ~ 2F Office' is the site   This area had the bombsite in the middle of the 2F, so the basic plan for the attackers would be to attack from both sides and surround the bombsite. For example, part of the team can come through Café or Arcade Stairs from Café Terrace, while others rappel up to castle Entrance and head to Cash Stash or Dragon Stairs.   There are a lot of good angles from the windows, so doing a rappel play around these windows isn’t a bad idea. Blackbeard can hold an angle on the inside of the bombsite while only exposing his head. Just doing this distracts the defenders and allows your team to move around more freely. 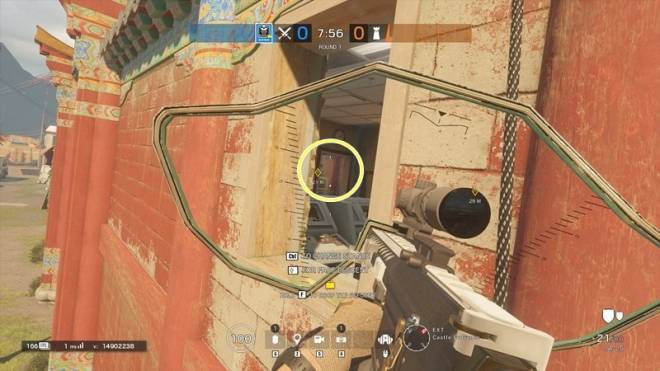 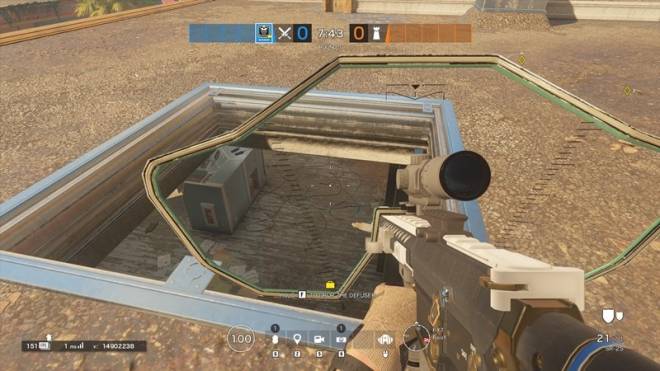 ▲ There’s a hatch to the Control Room from the rooftop 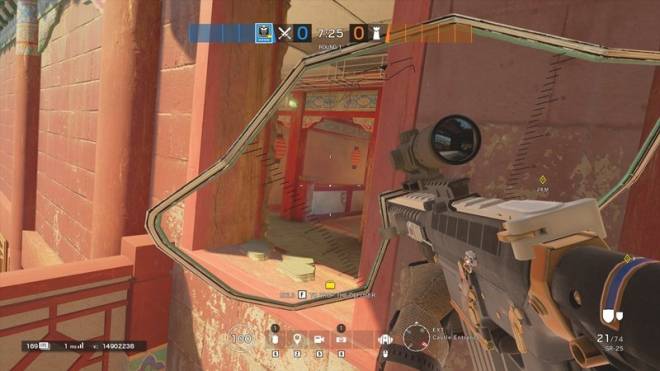 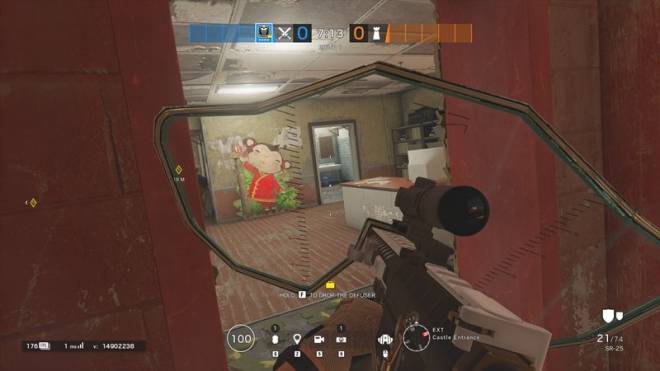 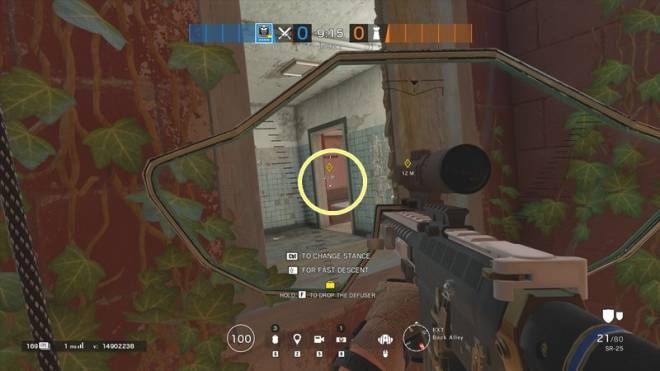 ▲ The Office Showers window gives an angle on Office 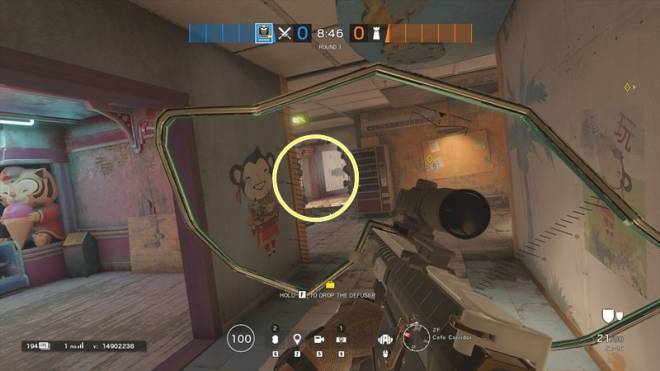 ▲ If a hard breacher takes down this wall at Yellow corridor, you can get an angle on Office   ▣ If '2F Bunk ~ 2F Day Care' is the site   It’s focused more on the west side of 2F. You can start the attack by going to Café or Upper Arcade from the Terrace. Of course, the defenders might be aware of this and could be waiting for you so always be careful. It would be best if you split the team to stall with the defenders at Café or Upper Arcade while the rest flanks the enemy from a different angle.   It’s also possible to rappel down the south side of the building, and attack from the Break Room window. Depending on the defenders’ setup, you can hold an angle upto Bunk, making it rather powerful. However, there are times when the defenders do a runout from the 1F window to catch people doing this so listen to the sound of the barricade being destroyed. 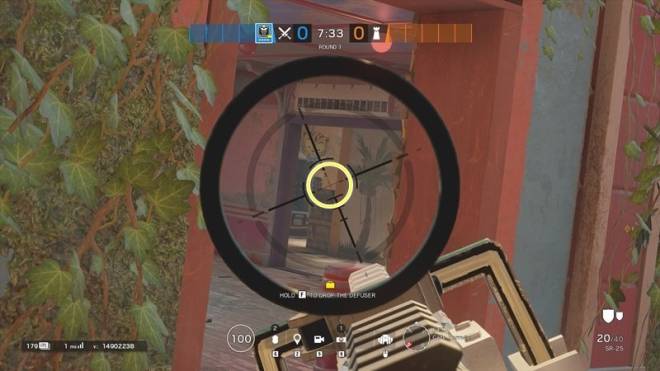 ▲ When the going through the Café door, you might see a defender peaking, and waiting for you 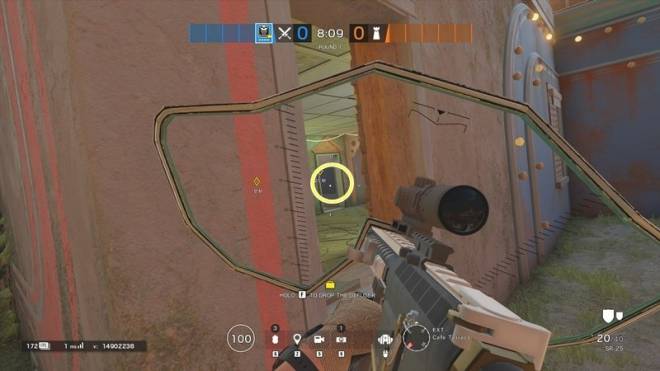 ▲ When entering from Upper Arcade window, careful of this angle 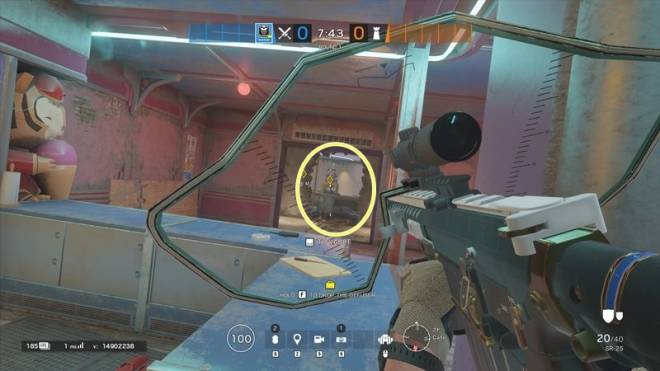 ▲ If you cleared Café corridor and Upper Arcade, a hard breacher can take down this wall for a new angle 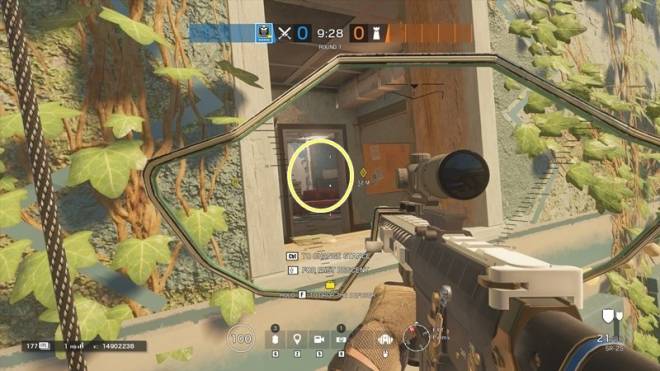 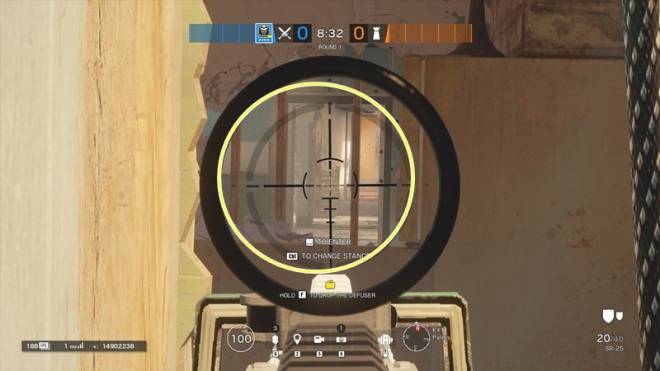 ▲ If you shoot this wall down, you get an angle on Yellow Corridor 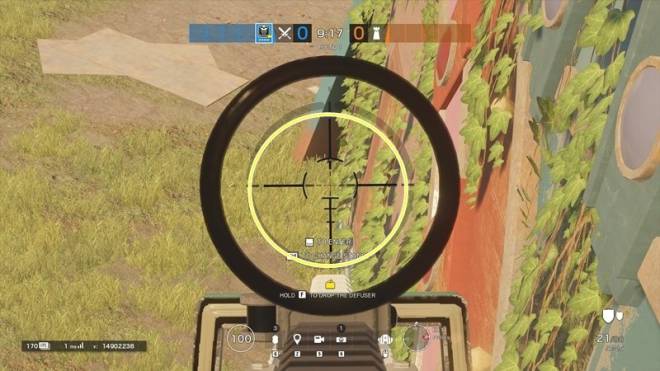 ▲ If you do a rappel play here, the defenders might do a runout play from the 1F window.   ▣If '1F Armory ~ 1F Throne Room' is the site   The bombsite is right in the middle of 1F, and there aren’t any windows or hatches from 2F, meaning you have to go inside through entrances. Not only that, the bombsites are stuck together, so there are only two entrances for the bombsites. Therefor it’s necessary for the attackers to have a hard breacher make a new angle for them.   There isn’t an angle to attack from the outside, and Blackbeard doesn’t have any breaching ability, so it’s not Blackbeard’s favorite area. If you want to help out, you can cover your hard breacher working on a wall. However, there is a penalty for equipping the rifle shield which is making zooming in slower. This can be dangerous when suddenly faced with a roamer. In such cases where immediate reaction is needed, it might be better to use your secondary weapon D-50 Pistol. 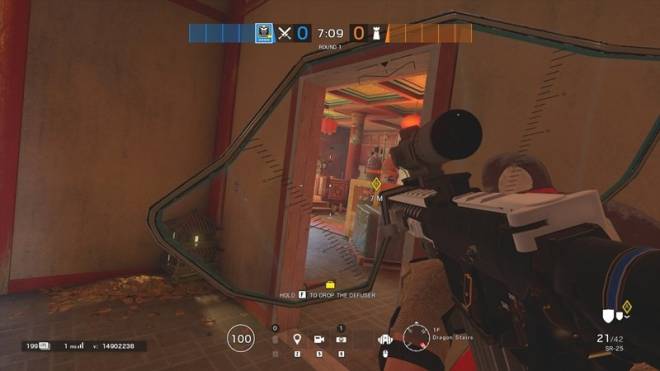 ▲ Dragon Stairs, the one of two entrances to the bombsite. If you try going in without intel on defenders’ location, it’s easy to get wiped out 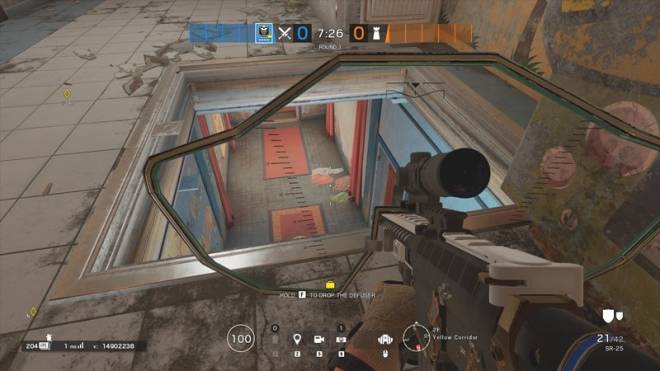 ▲ Blue room which is connected to both bombsites. There’s a hatch to it on 2F, but it’s hard to use. 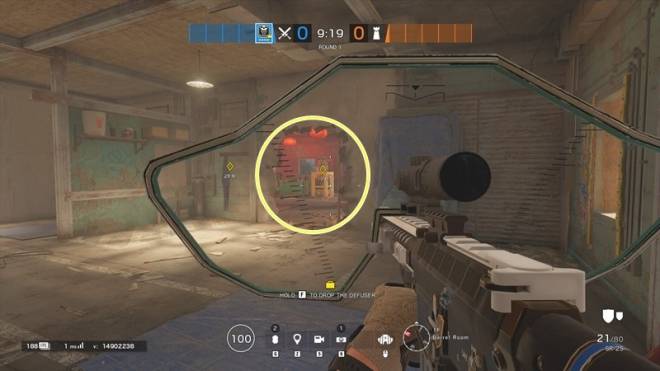 ▲ Wall breached after entering through Barrel Room. It’s usually this wall or

▲ this wall, after coming in through Maintenance window 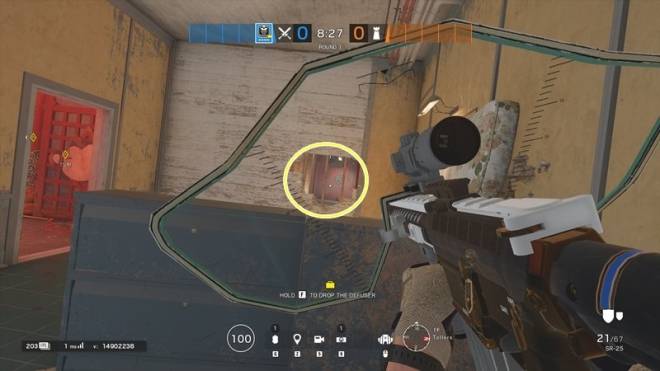 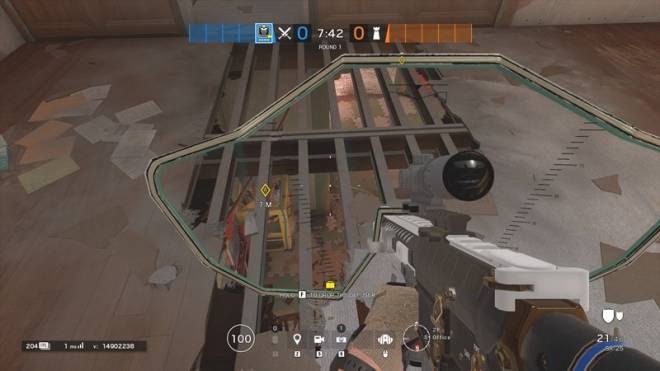 ▲ You can do a vertical play on Armory from 2F Office, but the floor on Infiltration Room is indestructible so you can’t do a vertical play on Throne Room   ▣ If '1F Lab ~ 1F Storage' is the site   Compared to the Amory ~ Throne Room, this area has a smaller surface area and there are windows leading to the bombsite, allowing attackers to freely attack Storage from the outside. Not only that, you can do a vertical play from 2F Café or Upper Arcade, meaning there are multiple options for the attackers. As a result, sometimes the defenders minimize anchors and the rest all act as roamers.   Blackbeard can use the breach charge on the floor to do a vertical play, so he can be used in multiple situations. However, as mentioned before, he has a hard time reacting immediately when he faces a roamer, so it might be better to cover your team from the windows. However, just rappelling from windows is useless so actually go in with your team when needed. 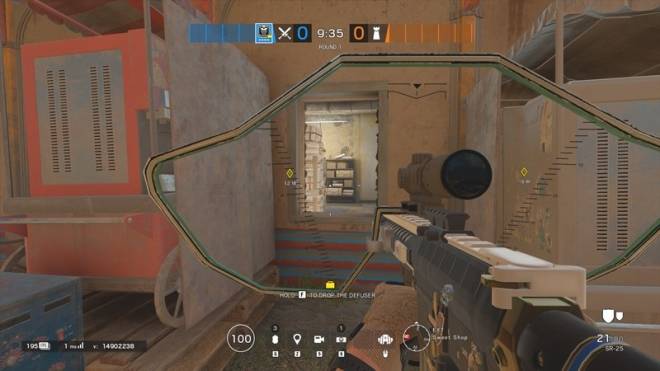 ▲ Window giving angle on Storage from outside 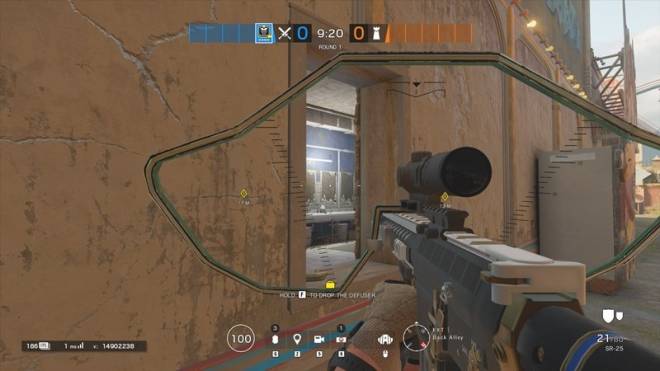 ▲ The window on the North side leads to Arcade Toilet 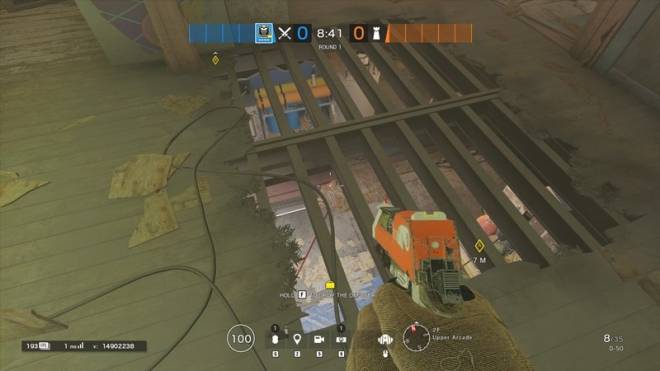 ▲ If you use your breach charge on the floor of 2F Upper Arcade, you can make an angle on Lab 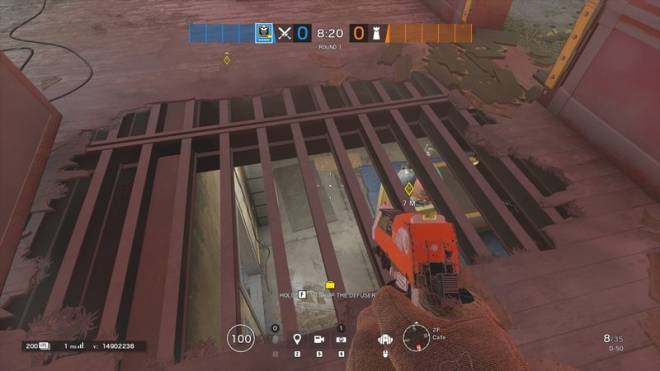 ▲ You can do a vertical play on Storage from Café 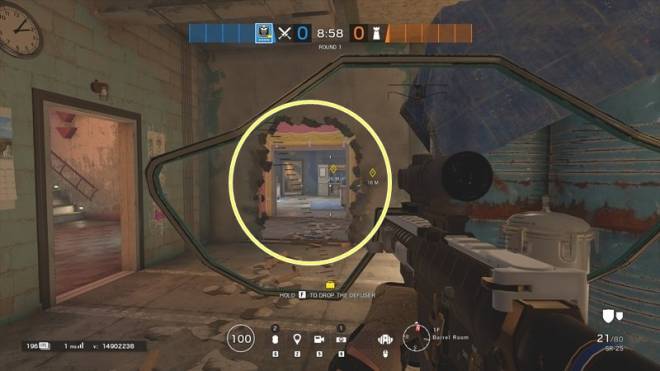 ▲ If you come in through Barrel Room and take down this wall, you get an angle on Lab, but it’s often reinforced.